What is the scriptural basis of the Tabernacle with the Blessed Sacrament as in the Catholic churches?

This question extends from this one.

Is there scriptural basis of the Tabernacle WITH the Blessed Sacrament as in the Catholic churches?

As far as I can tell, there is no scriptural basis for a Tabernacle with the Blessed Sacrament.

The Tabernacle found in Catholic churches follows from the Ark of the Covenant. The Ark was said to hold Manna (See Exodus 16:32). (The new Testament corollary being the Eucharist.) You can see the similarities in design (e.g. the two angels facing each other) from the pictures on the page you linked.

For more information about the Ark of the Covenant.

The ark of the covenant is an old testament type for the Blessed Virgin Mary. Both because of holiness (read: set-aside-ness) and because of what they contained.

I think I heard this point from Scott Hahn, but I'm pretty sure its an ancient sort of teaching. The reason that the Bible (the new testament at least) says that the ark contained the Rod of Aaron, the Manna from Heaven and the Tablets that God wrote the Ten Commandments on was because they represent the Three-fold office of Priest Prophet and King (respectively) which Our Lord is the ultimate exemplar.

And, just as Our Lady contained within her blessed womb our Savior, the tabernacle at every Catholic church contains the body and blood soul and divinity of Christ.

The manna is certainly reminiscent of the Eucharist (heavenly bread). And, if the Israelites had God among them in human form, they would have done the same thing Catholics do. It doesn't make sense to say the Tabernacle should be the same before and after the Incarnation. St. Peter even wanted to erect a tabernacle right on the spot on Mt Tabor when he saw the Glory of God manifest before him.

So there, 4 scriptural reasons:

There is an opinion among some historians that in the early centuries of the Christian era, say from the first to the fourth, no provision was made to keep the Blessed Sacrament in the churches or in places where the Eucharistic services were held. There is some foundation for this belief. In those times the Holy Eucharist was taken to the private houses of the Christians) as stated above. If that was the case, there appears to be no reason for supposing that it was reserved in the churches or other places of worship. The opinion is strengthened by the consideration of the circumstances of the time. The condition of the Christians in the early centuries was very precarious. Without legal standing in the Roman Empire, they were open to persecution at any time for professing Christianity. If they kept the Holy Eucharist in their places of worship, they ran the risk of exposing it to the profanation of the Gentiles, since the guardians of the law could have entered these edifices at any moment and taken possession of them. Therefore, if the Holy Eucharist was not kept in the churches) there was no need for such a thing as a tabernacle in which to reserve the particles. - Library: The Tabernacle: Its History, Structure and Custody | Rev. Francis J. Schaefer | Catholic Culture.

What is in the Catholic Church today appears to have been a natural development with Christian application of the names like the Sanctuary, the Altar, the Tabernacle, etc. understood as having been prefigured in the Old Testament. The understanding is centered on the Holy Sacrifice of the Mass and in the Real Presence of Jesus Christ in the Eucharist/Blessed Sacrament.

The following illustration and description will attempt to present the typology of the Tabernacle of Moses in the inside a typical Catholic Church. 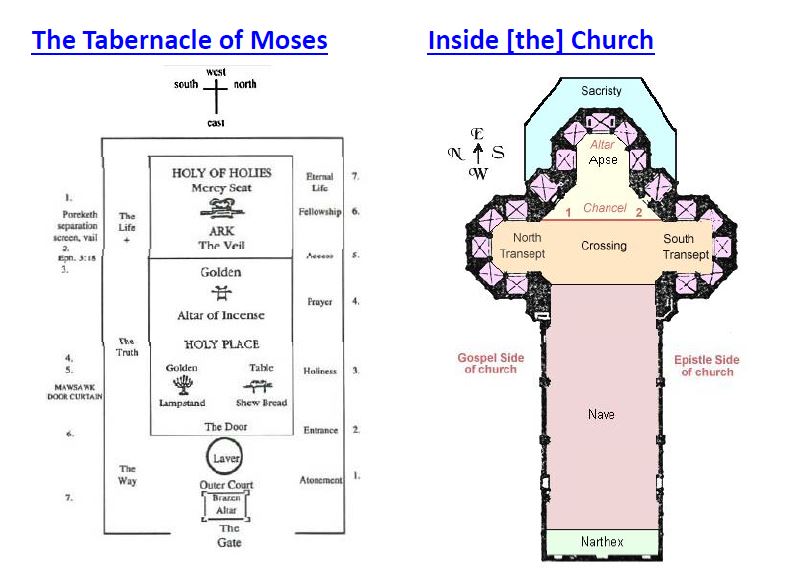 1. The Sanctuary: The part of a church containing the altar. In the OT the sanctuary was a sacred place for divine worship. The Tabernacle in the wilderness, built by Moses in the second year of the Exodus was a sanctuary.

2. The Altar: In Catholic churches the table on which the Sacrifice of the Mass is offered. cf. altar in the OT.

3. The Tabernacle: A cupboard or boxlike receptacle for the exclusive reservation of the Blessed Sacrament. cf. with Tabernacle (biblical) and in the link in 1. above.

4. The Ark of the Covenant: And its Mercy Seat, God's Throne among His people. In it the two tablets and [later?] the manna and Aaron's rod.

The Ark of the Covenant and its Mercy Seat is more the type of the Blessed Virgin Mary. In the litany, Mary is invoked as the "Seat of Wisdom" [OP: Jesus sits on her lap].

The manna [+ the commandments + Aaron's rod as in @PeterTurner's answer] in the tabernacle of Moses is the type of the true and living bread come down from heaven, the Blessed Sacrament reserved in the Catholic churches' tabernacles (see 3. above) and so also is the Bread of the Presence.

Please see also: Typology of God’s Dwelling in the Tent of Meeting and the Temple | The Mystery of Israel and the Church.

4
What is this box that can be found in Catholic churches?