What would the Jews of Jesus' time have known about heaven?

Looking at the cross references for John 12:34,

34 So the crowd answered him, “We have heard from the Law that the Christ remains forever. How can you say that the Son of Man must be lifted up? Who is this Son of Man?”

I found several regarding the eternal kingdom of Christ:

‘I will establish your offspring forever, and build your throne for all generations.’” Selah

The Lord has sworn and will not change his mind, “You are a priest forever after the order of Melchizedek.”

Of the increase of his government and of peace there will be no end...

and he will reign over the house of Jacob forever, and of his kingdom there will be no end.”

Given the wealth of such references, and the seemingly common misconception that the Messiah would bring about an earthly kingdom, it made me wonder: What did the Jews of that time know about heaven, or indeed, about the afterlife? Was it a very concrete thing, was their picture of it accurate (whether somewhat primitive or full and detailed), and was it based on Scripture or on tradition?

I believe the best way to approach this question is to start with the following verse Acts 23:8 (RSVCE)

8For the Sad′ducees say that there is no resurrection, nor angel, nor spirit; but the Pharisees acknowledge them all.

Thus some Jews in Jesus' time believed in spirits. When one died, their soul went down to Sheol.

All however, did not suffer the same fate, the wicked one, cut off from his people, was tormented in Hades while the righteous one was gathered to his people, into the bosom of Abraham. [cf. Luke 16:23]

Heaven for them was the dwelling-place of God and where his throne was, the angels also resided there, and it was also the firmament, the region in which sun, moon, and stars are placed, and from where rain, the hail, and the lightning came. [cf. HEAVEN | Jewish Encyclopedia]

It should be noted that the Torah focuses on "Olam Ha Ze," which means "this world." That was the main focus for the Jews.

As for the kingdom of heaven? With reference to the Messianic age, it applies to the time when God will be the sole King on earth, in opposition to the kings of worldly powers. [cf. HEAVEN | Jewish Encyclopedia] 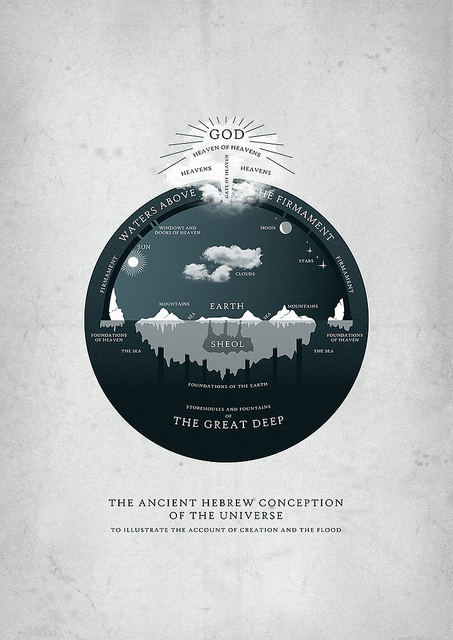 The Nation of Israel at the time Jesus was preaching, was well versed in the Pentateuch, the Prophets and the Psalms, and from those books we find the following Scriptures:

Deuteronomy 26:15 KJV Look down from thy holy habitation, from heaven, and bless thy people Israel, and the land which thou hast given us, as thou swarest unto our fathers, a land that floweth with milk and honey.

Psalms 11:4 KJV The Lord [is] in his holy temple, the Lord's throne [is] in heaven: his eyes behold, his eyelids try, the children of men.

Isaiah 66:1 KJV Thus saith the Lord, The heaven [is] my throne, and the earth [is] my footstool: where [is] the house that ye build unto me? and where [is] the place of my rest?

From these Scriptures it would cause one to believe that Heaven was up, as seemingly most people believe it to be today. The Israelites on the other hand might have believed that God's repose was in the Temple based on:

And even though the Temple had been destroyed it had been rebuilt by Ezra and Nehemiah. However the presence of the LORD is more connected to the Mercy seat which is the lid to the ark of the covenant, and that disappeared at about the time of the Captivity of Israel by Nebuchadnezzar according to this article extracted from http://www.allaboutarchaeology.org/when-did-the-ark-of-the-covenant-disappear-faq.htm:

When did the Ark of the Covenant disappear? The last historical mention of the Ark in Scripture is in Second Chronicles chapter 35, where King Josiah (who reigned in Judah c. 640-609 BC) asked the Levites to return the Ark to the Temple where Solomon had originally housed it after completing and dedicating the Temple sometime in the 10th century BC (Second Chronicles, chapter 5). There is no mention as to why the Levites had removed the Ark in the first place, nor is there any indication as to whether or not the Levites acquiesced to King Josiah's request.

In the apocryphal book (that is, noncanonical book) of Second Maccabees, chapter 2 (verses 1-8), we read that the prophet Jeremiah "following a divine revelation, ordered that the tent [i.e. the tabernacle of meeting] and the ark [i.e. the ark of the covenant] should accompany him and how he went off to the mountain which Moses climbed to see God's inheritance [i.e. Mt. Nebo; see Deuteronomy 31:1-4]. When Jeremiah arrived there, he found a room in a cave in which he put the tent, the ark, and the altar of incense; then he blocked up the entrance." (vv. 4-5) There is some debate as to whether or not this second-hand account (see v. 1) is trustworthy. - See more at: http://www.allaboutarchaeology.org/when-did-the-ark-of-the-covenant-disappear-faq.htm#sthash.MIz6AGn2.dpuf

Since it appears to be generally accepted that Heaven is the abode of God, Heaven would not se a specific place, but would be wherever God is, and not where he goes to.

And since we have no direct information, as to what was the general attitude of the Israelites at that time, any speculation as to their concept of where Heaven actually exists would be just that speculation, unless there is some artifact which can further enlighten us.

Not the answer you're looking for? Browse other questions tagged heaven judaism .

1
CS Lewis said time would probably continue in Heaven...But how?
2
Does Jesus do for Gentiles what the Torah does for Jews?
17
How common were blasphemy accusations and trials among the Jews during the time of Jesus?
3
As a young Jew what would Jesus have been taught about heaven and hell?
2
Has any Christian (group) attempted to compile a list of personages, which are Biblically stated to be (eventually) in heaven?
1
Why does the angel of the Lord call out from heaven to Abraham at Genesis 22?