Where did the Roman Catholic denomination in India originate, and why are there differences amongst Indian Christians?

I would like to know from where Roman Catholic denomination originated. Why does we have many groups like CSI, Jacobites, Orthodox, Evangelist, etc? Is it because of the believes people divide among themselves?

If you're talking caste, I'm assuming your talking about the Christian caste in India. Within castes, there are denominational differences, which this answer will discuss.

Legend says that St. Thomas - one of the original 12 apostles - made it to India in 52 AD. That's the official origin story of Christianity in India. The Christians of Nagaland and Assam, on the other hand, tend to come from the missionary efforts of Protestants in the 1800s. They both originate from the same place and actually don't differ very much on key issues like salvation, the nature of God, and how one should live. Typically, they recognize each other as Christian.

In the intervening 1750 years, the biggest question that divided the two sects of Christians was the question of papal authority. In the 1500s, Martin Luther became the figurehead of what is often called the Protestant Reformation. There was fighting and war between them, too. He railed against corrupt practices of the Roman church that even the Roman Church today agrees were bad. Protestants basically said, there shouldn't be a Pope. Roman Catholics believe in apostolic succession and do.

Within Catholicism, there are different "orders" of Christians - people like Jesuits, Benedictines, etc... who subscribe to slightly different rules about how one should practice, but these are almost entirely organizational matters, and they all are in theory in submission to the Bishop of Rome.

For a more comprehensive answer on Thomatic Christians, consult this article on Christianity in India. Note, the focus there will be on "Catholics" - which could mean Oriental Orthodox (e.g. Syriac and other Nestorian) or Roman churches. Oriental Orthodox branched off in 451 AD, mostly over Christology. When it comes to philosophically understanding how Jesus was fully God, fully man, these churches all rejected the consensus in the West.

This graphic in particular shows the denominational lineages: 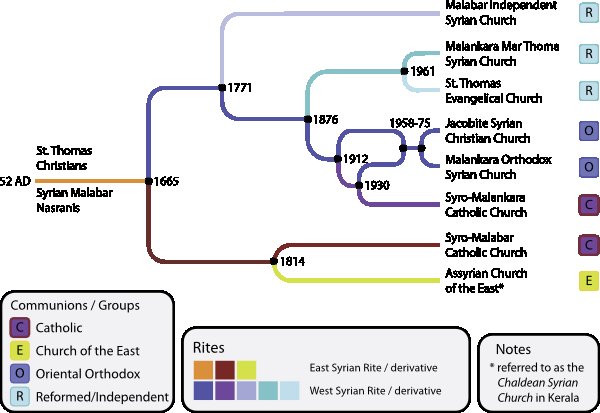 Within Protestantism, there are different groups that also have different interpretations of communion, baptism and other rites - and most importantly they don't submit to any other earthly authority, but again, the differences aren't all that great in the grand scheme of things.

Not the answer you're looking for? Browse other questions tagged catholicism church-history christianity-in-india or ask your own question.

23
Does the Catholic Church officially recognize Protestants as Christians?
8
How do Protestants deal with pre-Reformation heresies?
5
Apostolic Succession in the Catholic church
1
What is the historical and theological basis for Protestant anti-Catholicism?