Is Asia in the Bible the Asia of today?

I have this sneaking suspicion that the Asia listed in Acts is not the continent of Asia.

Acts 19:9-10 ESV But when some became stubborn and continued in unbelief, speaking evil of the Way before the congregation, he withdrew from them and took the disciples with him, reasoning daily in the hall of Tyrannus. This continued for two years, so that all the residents of Asia heard the word of the Lord, both Jews and Greeks.

Acts 20:16 ESV For Paul had decided to sail past Ephesus, so that he might not have to spend time in Asia, for he was hastening to be at Jerusalem, if possible, on the day of Pentecost.

If that's the case, then what is the Asia of the Bible?

You are correct. Asia as referred to in the bible was a province in the Roman Empire. See: en.wikipedia.org/wiki/Asia_(Roman_province) 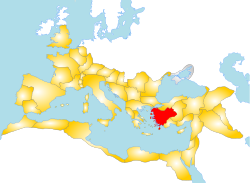 For further information, refer to the etymology section of the main Wikipedia article on Asia.

Not the answer you're looking for? Browse other questions tagged acts historical-criticism asia .

14
Have the dietary prohibitions of Acts 15:20 been applied to Christians today?
6
Would the bible draw parallels between the spies returning from Canaan and modern biblical criticism?
5
Is the Catholic Magesterium in favor of hard liquor prohibition?
10
Why does Iglesia ni Cristo use the Lamsa Bible?
19
Historical figures mentioned in the Bible that sceptics doubted existed but were later confirmed by archaeology
0
The time of Abraham
4
According to Catholicism which parts of the Bible actually happened historically?
3
Do Cessationists believe that the Holy Spirit still speaks specific messages or instructions to Christians today?
0
What denominations believe that a Book of Acts style of interaction with the Holy Spirit is still possible today?