How well supported is the generic interpretation Rublev's Icon as being a depiction of the Holy Trinity as portrayed in Genesis 18? [closed]

Ask Question
Asked 7 years, 1 month ago
Active 5 years, 5 months ago
Viewed 371 times
7
Closed. This question needs to be more focused. It is not currently accepting answers.

This was produced in the 15th century by Andrei Rublev's icon of the Trinity, a highly regarded Russian orthodox artist: 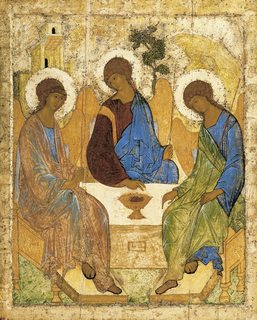 It is generally taken to be depicting the three men of Genesis 18 as being physical visitations of the Godhead.

Are there any texts from authoritative commentaries, the early church fathers, theologians or research that support Rublev's depicted interpretation of this passage?

Different denominations may have differing views so please quote your source references.

Among church fathers, Ambrose is one supporter:

Abraham, who was glad to receive strangers, faithful to God and tireless in his service and prompt in fulfilling his duty, saw the Trinity typified. He added religious devotion to hospitality, for although he beheld three, he adored one, and while keeping a distinction of the persons, yet he called one Lord, thus giving honor to the three but signifying one power. (On His Brother, Satyrus 2.96)

Origen actually finds images of the members of the Trinity in the food that is served. The calf represents Christ (Homilies on Genesis 4.2), and the preparation of three equal measures of flour into bread is an image of the Trinity (On Abraham 1.5.38).

Other fathers are not so supportive of this idea. Ephrem the Syrian believed just one of them was the Lord (Commentary on Genesis, 15.1), while Augustine called all three of them angels (City of God, 16.29).

See the Ancient Christian Commentary if you'd like to investigate further.

The Navarre Bible - Pentateuch explanatory note on Gen 18:1-15 has in part:

This new appearance of God to Abraham is somewhat mysterious: the three men stand for God. When Abraham speaks to them, sometimes he addresses them in singular (as if there were only one person there: cf. v.3), and sometimes in the plural (as if they were three: cf. v.4). That is why some Fathers interpreted this appearance as an early announcement of the mystery of the Holy Trinity; others, following Jewish tradition (cf. Heb 13:2) take these personages to be angels. The sacred text says that one of the three men ([the LORD]), apparently stays with Abraham (cf. v. 22), while the other two, who are referred to as angels, go to Sodom (cf. 19:1).

Not the answer you're looking for? Browse other questions tagged exegesis genesis trinity abraham theophany or ask your own question.