Is there any correlation between national prosperity and percentage of Christians?

I have heard of anecdotal evidence suggesting that the proportion of Christians in a population directly (positively) impacts national prosperity. In other words, the more Christians in a nation, the richer the nation becomes.

Possible current examples include India and China which are apparently seeing both an increase in the proportion of Christians (India / China) and in prosperity (India / China).

This would seem to follow the Biblical pattern, see e.g. Haggai 1.

But is this a real phenomena? Can we see a genuine correlation? And if so, what is its cause?

Note: in light of comments and answers so far, this question is about Christianity, not religion generally.

Actually it's the other way round: 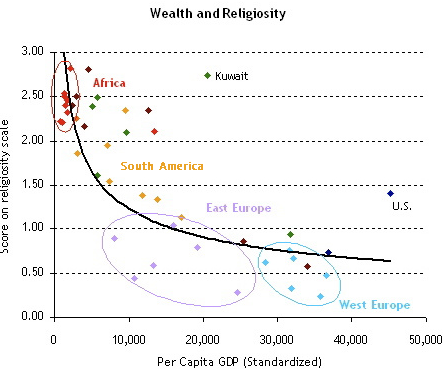 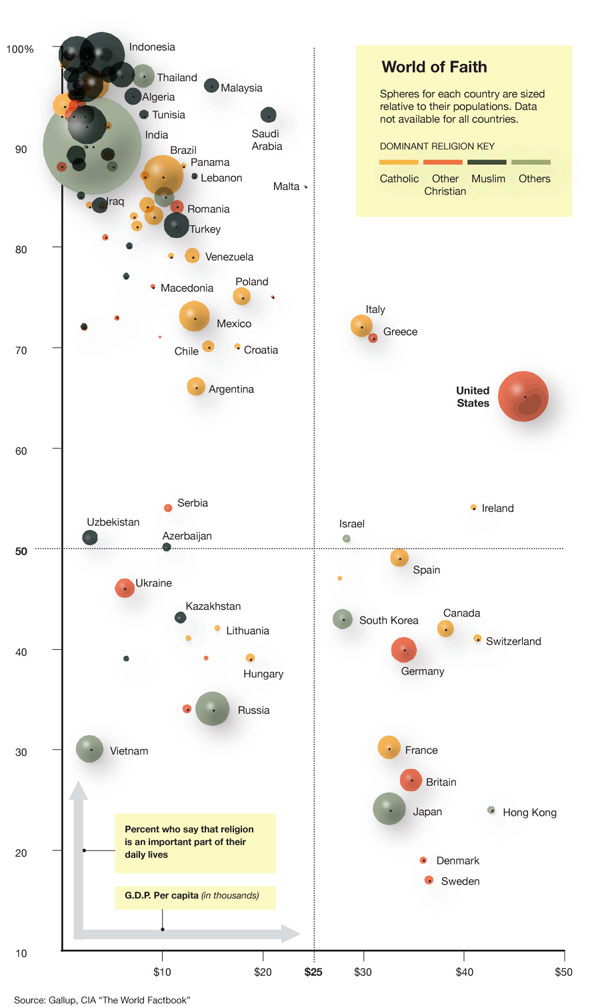 There isn't much evidence to support this hypothesis. The countries with the top ten incomes per capita are a mix of Islamic, Atheist (at least trending that way now; historically Christian), Christian, and Buddhist.

If you look at a broader trend across countries, the U.S. is a highly-religious outlier, but basically the trend is downwards; the more religious a country is, the lower it's GDP per capita. (This isn't split out by Christian vs. non-Christian religions, but if you look at the data points, you don't find the predominantly Christian countries dramatically farther to the right (i.e. higher income) at the same level of religiosity except for the U.S..)

Yes, there is a direct correlation, In the words of St. Ambrose relating the story of the 3rd century martyr St. Lawrence:

Such gold the holy martyr Lawrence preserved for the Lord. For when the treasures of the Church were demanded from him, he promised that he would show them. On the following day he brought the poor together. When asked where the treasures were which he had promised, he pointed to the poor, saying: "These are the treasures of the Church." And truly they were treasures, in whom Christ lives, in whom there is faith in Him. So, too, the Apostle says: "We have this treasure in earthen vessels." (2 Corinthians 4:7) What greater treasures has Christ than those in whom He says He Himself lives? For thus it is written: "I was hungry and you gave Me to eat, I was thirsty and you gave Me to drink, I was a stranger and you took Me in." (Matthew 25:35) And again: "What you did to one of these, you did it unto Me." (Matthew 25:40) What better treasures has Jesus than those in which He loves to be seen?

These treasures Lawrence pointed out, and prevailed, for the persecutors could not take them away. Jehoiachim, who preserved his gold during the siege and spent it not in providing food, saw his gold carried off, and himself led into captivity. Lawrence, who preferred to spend the gold of the Church on the poor, rather than to keep it in hand for the persecutor, received the sacred crown of martyrdom for the unique and deep-sighted vigour of his meaning. Or was it perhaps said to holy Lawrence: "Thou should not spend the treasures of the Church, or sell the sacred vessels"?

On the Duties of the Clergy (Book II)

The point is, these are the treasures of the Church and they are increasing at a great rate, while worms and moths eat at the treasures many of the "1st world" Christians have stored up for themselves.

This answer is meant as a rebuttal to the the premises of your question and a counter point to the other, in my opinion, meaningless answers. The answer is yes, national prosperity abounds where Christ is made present. You just need to be calculating in terms of the right kind of prosperity.

Not the answer you're looking for? Browse other questions tagged bible politics wealth .

8
Does God want things? What are some of the things He wants, and how did we find out?