Are there any statistics that show how many scientists are Christians or otherwise believe in a personal God? [closed]

This question does not appear to be about Christianity within the scope defined in the help center.

I was reading The God Delusion by Richard Dawkins and he mentions a study regarding the percentages of believers in the National Academy of Sciences and Royal Society. I was wondering if these figures mirrored the numbers for all other scientists, not merely those elected to prestigious societies. Unfortunately, googling "number of christian scientists" doesn't get me the kind of christian scientists I'm looking for...

Does anyone have any statistics on the number of scientists (Ph.D.-level researchers) who are Christian?

In 1998, Edward J. Larson and Larry Witham published an article in the leading scientific journal, Nature, their findings on the percent of believers among scientists in the National Academy of Sciences:

In regards to the question being asked, however, a Pew Survey in mid-2009 found that 33% of all scientists in America (not just those elected to NAS) believe in God, compared to 83% the American public. 18% believed in some sort of "higher power" (unaffiliated with any religion) and 41% are atheist. This suggests that the "average" scientist is more likely to believe in God than the most esteemed scientists. 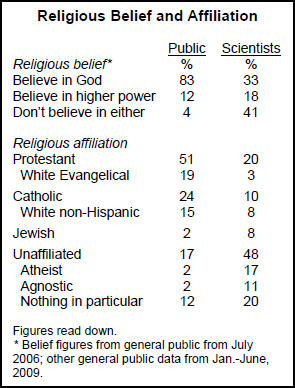 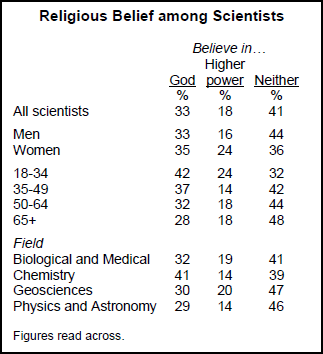 This interesting article summarizes some of the findings from the Pew data.

You can look at this article: http://www.lhup.edu/~dsimanek/sci_relig.htm, and get a rough idea.

I expect that the numbers will be lower now, in terms of those believing, since so many vocal Christians are so anti-science.

Larson and Witham present the results of a replication of 1913 and 1933 surveys by James H. Leuba. In those surveys, Leuba mailed a questionnaire to leading scientists asking about their belief in "a God in intellectual and affective communication with humankind" and in "personal immortality". Larson and Witham used the same wording [as in the Leuba studies], and sent their questionnaire to 517 members of the [U.S.] National Academy of Sciences from the biological and physical sciences (the latter including mathematicians, physicists and astronomers). The return rate was slightly over 50%.

The results were as follows (figures in %):

More generally, the following statistic was interesting, as was the accompanying article, "16% of US Science Teachers are Creationists". This article can be found at the following website; www.newscientist.com/.../dn13930-16-of-us-science-teachers-are-creationists.html

However, if you are searching for some fascinating scientific debate for creationism, I suggest viewing Ben Steins's "Expelled: No Intelligence Allowed" dvd. There are many interviews with respected scientists who believe in Intelligent Design; two of which I have named below and have added a brief biology for each.

David Berlinski
Received his Ph.D. in philosophy from Princeton University and was later a postdoctoral fellow in mathematics and molecular biology at Columbia University. He has authored works on systems analysis, differential topology, theoretical biology, analytic philosophy, and the philosophy of mathematics, as well as three novels. He has also taught philosophy, mathematics and English at such universities as Stanford, Rutgers, the City University of New York and the Universite de Paris. In addition, he has held research fellowships at the International Institute for Applied Systems Analysis (IIASA) in Austria and the Institut des Hautes Etudes Scientifiques (IHES) in France.

Doug Axe
Received his Ph.D from Caltech and did post-doc research at Cambridge University, and published some of his findings in the peer-reviewed Journal of Molecular Biology. He was trying to see whether it is easy or hard to shuffle amino acids randomly in order to make functional proteins. Those JMB publications show that the number of functional amino acid sequences is tiny, compared to the number of possible sequences.

Doug Axe’s research likewise studies genes that it turns out show great evidence of design. Axe studied the sensitivities of protein function to mutations. In these “mutational sensitivity” tests, Dr. Axe mutated certain amino acids in various proteins, or studied the differences between similar proteins, to see how mutations or changes affected their ability to function properly. He found that protein function was highly sensitive to mutation, and that proteins are not very tolerant to changes in their amino acid sequences. In other words, when you mutate, tweak, or change these proteins slightly, they stopped working. In one of his papers, he thus concludes that “functional folds require highly extraordinary sequences,” and that functional protein folds “may be as low as 1 in 10^77.”

Not the answer you're looking for? Browse other questions tagged science .

8
How do Christians rebut Matt Dillahunty's objection that the resurrection of Jesus is untestable, unfalsifiable and thus unreasonable to believe?
0
Are there any Christians who are scientists and believe in modern miracles?