How are first-grade relics prepared?

I'd like to clarify that I'm asking what the formal ritualistic practices are which takes place upon the death of a saint in order to create relics from his remains. For example, what happens when a saint dies? Does the Vatican claim the body and store it somewhere for quite some time? Is there a doctrine/ritualistic process by way of which the body is divided? And what is the significance of these processes, in a spiritual sense?

Since there is a veneration of the cult of saints, I feel like the Vatican has a say in how the remains of these godly men are handled, especially since The code of canon law says:

The ancient tradition of placing relics of martyrs or other saints under a fixed altar is to be preserved, according to the norms given in the liturgical books.

Additionally, if you can please provide information on how the process has evolved over time, that would be appreciated. Some texts for additional reading are also greatly appreciated.

The Second Vatican Council recalls that "the Saints have been traditionally honoured in the Church, and their authentic relics and images held in veneration" - taken from the document Decretum de invocatione, veneratione et reliquiis Sanctorum, et sacris imaginibus of the Council of Trent. The term "relics of the Saints" principally signifies the bodies - or notable parts of the bodies - of the Saints who, as distinguished members of Christ's mystical Body and as Temples of the Holy Spirit in virtue of their heroic sanctity, now dwell in Heaven, but who once lived on earth. Objects which belonged to the Saints, such as personal objects, clothes and manuscripts are also considered relics, as are objects which have touched their bodies or tombs such as oils, cloths, and images.

There are 3 kinds of relics which are issued by the Holy See. These are ranked as follows:

1st Rank Relics: Actual body parts, clothes, jewellery and pieces of other objects which are known to have belonged to the saint. This also includes bones and blood of the saint in particular.

2nd Rank Relics: Whole objects or fragments extracted from the place where the saint was present at. For example a piece of furniture at the house they lived in would be a 2nd Rank Relic. It is presumed that the said himself/herself was in touch with this particular object during his/her lifetime.

3rd Rank Relics: This are any other objects which were in lifetime, or even after his death, in contact with the body of the saint. These are the most commonly found relics and can be easily obtained in events commemorating the particular saint. They are usually touched to the burial place of the saint, to constitute a 3rd degree relic.

In itself, there is no procedure whereby the Vatican claims the body of the saints upon his/her death, since there is a whole process to be made before the person is finally declared a Saint. This includes miracles to be performed with the intercession of the person. After these have been scrutinized and studied by the respective board at the Vatican, the process for the canonisation of the person is started. This is divided into 3 stages, whereby the person:

The process of being proclaimed venerable must be started after the death of the person, and it is then, that relics can start to be collected. At this stage in particular, the body is usually moved from the actual burial place, to a better location, where he/she can be venerated in a better manner (unless the person was already being venerated, such as in the case of Saint Pope John Paul II for example).

As already mentioned before, relics are then gathered from body parts, vestements, jewelry or fragments from places visited by the saint.

The Vatican had in fact issued a document on the veneration of Beatified people and Saints in 2001. Paragraphs 236 and 237 speak of relics and their collection. Additionally, chapter 8 of this document speaks of the importance of shrines and pilgrimages, outlining their importance to the Catholic faith.

First class relics are the physical remains of a saint (a bone, a hair, skull, a limb, etc.)

How are first class relics prepared? They are preserved in special containers, after carefully cleaning them, perfuming them and repairing them if required.

A wooden piece from the True Cross, safeguarded inside an ornamented cross. 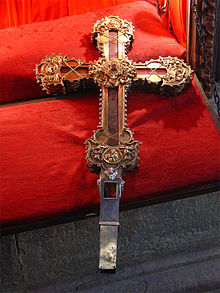 The body of Saint Bernadette covered in wax, believed to be incorruptible by the Catholic church, after she was exhumed three times.

Not the answer you're looking for? Browse other questions tagged catholicism relics or ask your own question.

8
How does the Catholic Church identify and collect relics?
1
Where are the Mormon “relics”?
5
Did the Council of Trent define rules for encasing Relics?
6
Relics of Noah's Ark?
4
Why are relics that can perform miracles not idols?
2
Are relics only considered first class if they were collected from a Saint's dead body?
3
What is the official status of the person of Philomena who at one time was liturgically canonized by Pope Gregory XVI?
7
Why do the Catholics and Orthodox keep relics and bone fragments? Isn't this disrespect for the body?
2
In light of the many changes in regulations, what is the purpose of the Roman Catholic altar and is it neccessary for a valid Mass?