Do the scriptures indicate the physical appearance of the Israelites?

I have seen ancient depictions of the ancient Israelites and there features were different than I expected.

Linguistic experts have stated that Hebrew is one of the early Asiatic-African languages.

Is there any references in Scripture to the physical identity of the ancient Israelites?

We will literally never know without a time machine. However, given the region and it's history, as well as the people living there today it's reasonable to assert that they were a mix of all types of skin tones ranging from the typical Israeli today to the darker toned Northern African people today.

The closest example to a "typical" Hamitic person is this picture of a Bashirin Hamite from Augustus Henry Keane's Man, Past and Present (1899). So if you went with Keane's findings, that'd be your closest answer. However, as I mentioned above, it's not unreasonable to assume they were the typical Israeli/Northern African tone.

There is a strong tradition that some of the descendants of Noah through his son Ham were black. Ham had a son named Cush, which means "black" in Hebrew. Cush is the most common term designating color in reference to persons, people or lands used in the Bible. It’s used 58 times in the King James Version. The Greek and Latin word is Ethiopia. In classical literature, Greek and Roman authors describe Ethiopians as black. Archaeology has found these people to be black. In the book of Jeremiah, the question is asked, "Can the Ethiopian change his skin?"

Genesis 10:6-20 describes the descendants of Ham as being located in North Africa, Central Africa and in parts of southern Asia. Psalm 105:23 mentions the "land of Ham" in Egypt, and Psalm 78:51 connects the "tents of Ham" with Egypt.

I'm going to write this answer from top of my head. It's not unreasonable to believe this theory. If we take in consideration scripture that describes Ancient of Days (name Daniel used for God) having hair like wool. Or in revelations similar description: "The hair of His head was white like wool, as white as snow, and His eyes were like a blazing fire." referring to Yeshua... key clue is wooly head which is of course typical "African" (for lack of better term) feature. If we look at ancient archaeology we can conclude that ancient B.C. civilisations like Sumer, Babylon, Akkadian, Hattites, 'Israel', and others had darker complexion... even ancient Chinese etc.

So how did the current Jews some to Israel and no trace of darker complexion?

Well answer is diaspora, exile and numerous ethnic cleansing and wars on the Jews etc...

This is even in scriptures all over the place.

This is why now we have various African Jewish tribes claiming to be "original jews"...

Genetic tests carried out by British scientists have revealed that many of the Lemba tribesmen in southern Africa have Jewish origins, according to a report by the BBC. The Lemba, a tribe of 70,000 to 80,000 members who live in central Zimbabwe and northern South Africa, have customs which are similar to Jewish ones: Lemba refrain from eating pork or other foods forbidden by the Torah, or forbidden combinations of permitted foods, wear yarmulke-like skull caps, conduct ritual animal slaughter, have a holy day once a week, and even put a Star of David on their gravestones. According to their oral tradition, the Lemba are descended from seven Jewish men who left Israel 2,500 years ago and married African women, according to the BBC. The Lemba prefer their children to marry other Lembas, and marriage to non-Lembas is being discouraged.

Their sacred prayer language is a mixture of Hebrew and Arabic. Their religious artifact is a replica of the Biblical Ark of the Covenant known as the ‘ngoma lungundu’, meaning "the drum that thunders.” The object went on display recently at a museum in Harare, Zimbabwe, and has instilled pride in many of the Lemba. They say the ark was built almost 700 years ago from the remains of the original ark, which according to the Bible was used to store the Ten Commandments. For decades, the ancient vessel was thought to be lost until it was discovered in a storeroom in Harare recently.

Members of the priestly clan of the Lemba, the Buba – which is one of 12 clans – have a genetic element also found among the Jewish priestly line, known as Kohanim. "This was amazing," Professor Tudor Parfitt from the University of London told the BBC. "It looks as if the Jewish priesthood continued in the West by people called Cohen, and in same way it was continued by the priestly clan of the Lemba.”

It's not that crazy if you study the history IMO...

There is a lot of correlation between Hebrew customs and African customs of West Africa for example, you have Books like "Hebrewisms of West Africa: From Nile to Niger with the Jews" that describe this.

In 1930 the Dial Press of New York published a book by Joseph J. Williams entitled Hebrewisms of West Africa: From Nile to Niger with the Jews. Williams was a Catholic friar who devoted several years in Jamaica studying the Ashanti. In his observations, he noted remarkable evidence of Hebraic culture amongst them.

He indicates quite interestingly that, “The very name Ashanti has itself a strong Hebraic flavor. For, while some would derive the word from ‘Shan’ the name of a plant, and ‘dti,’ to eat, claiming that the title must have been acquired in the time of great famine, when they found sustenance in the plan in question, this is mere quesswork. Actually, the termination of “ti” or “tie” in the names of West African Tribes has usually the general meaning of ‘the race of,’ ‘the men of,’ ‘the children of.’ This would make Ashanti, ‘the people of Ashan.’ There was as a fact, a town of the name Ashan in the domain of Juda. Priests were in residence there according to the First Book of Chronicles, where the word is spelt ASHAN though in the corresponding passage of Joshua it is spelt AIN, which the Jewish Encyclopedia suggests ‘may be a corruption of Ashan.’” (pp. 60-61) Note: See 1 Chronicles 6:59 and Joshua 21:16 for the Scriptural references.

Williams also notes a “truly remarkable similarity of the Ashanti Yame and the Hebrew Yahweh, first as regards the etymological derivation of the words themselves; and then in the tribal concept of Divine Attributes and the created channels of Divine influence; and finally in the divided service.” (p.320) The Ashanti also believed in a Redeemer whose name was Ta Kora, the “son of the supreme God.” (p.320) Not all Jews are anti-Christ but to the contrary, the true Jews acknowledge Moshiach as being identified as Yeshua.

Hebrewisms were not just limited to the Ashanti in Jamaica but were plentiful in the land from which they came: Africa. Williams notes the following irrefutable evidence of Hebrewisms in Africa: • The Floggings, the traditional number of strokes: forty less one • The common practice of New Moon festivals • The oath drink • The expectation of a Moshiach • Jewish distinction between diaboli and demonia • The duodecimal division of tribes into families • Exogamy • Blood sacrifices with the sprinkling of blood upon the altar and door-posts • Mourning Customs • Obsessions • Legal defilement • Jewish octave • Law on adultery • Sabbath rest • Levirate marriages • Circumcision • Priestly garb

Today there are numerous "Hebrew Isrealite" movements that claim that original jews were indeed darker complexion.

It's still very controversial because of classical icon of Jesus in Roman Catholic church.

But also let's take in consideration Eastern orthodox or Ethiopian orthodox churches their iconography shows darker "Jesus/Yeshua" and old Ethiopian story of how they became Jewish/Christian goes that son of Solomon and Queen of Sheba went south and started Ethiopian empire.

Ethiopia has one of the oldest churches and even claims to have ark of the covenant maybe we should look into their traditions and knowledge to learn what they have to say and not only look at Roman Catholic perspective and imagery.

The Solomonic dynasty, also known as the House of Solomon, is the former ruling Imperial House of the Ethiopian Empire. The dynasty's members claim patrilineal descent from the biblical King Solomon and the Queen of Sheba. Tradition asserts that the Queen gave birth to Menelik I after her biblically described visit to Solomon in Jerusalem.1 In 1270, the Zagwe dynasty of Ethiopia was overthrown by Yekuno Amlak, who claimed descent from Solomon and initiated the Solomonic era of Ethiopia. The dynasty would last until 1974, ended by a coup d'état and deposition of the emperor Haile Selassie. 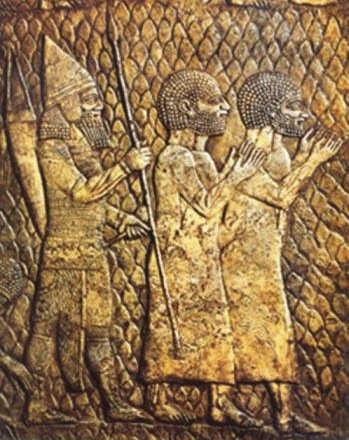 This first image shows Jews being taken to Babylonian captivity

The blackness of the ancient Hebrews has been vehemently denied by most historians and lay people. Most Jews do not want to acknowledge this truth because of what it means regarding the present day Jewish population. The images in this document prove that the ancient Hebrews were black. Notice the kinky short afros in some pictures, the dread locks of the Hebrews, the brown complexion of skin, and the African facial features of the Hebrews in the pictures. 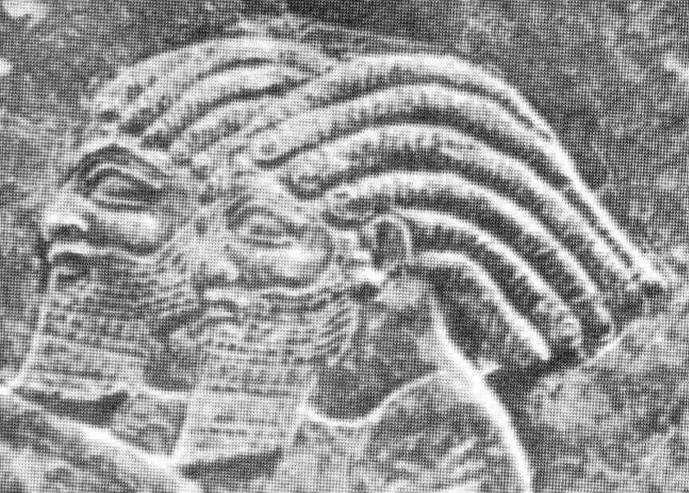 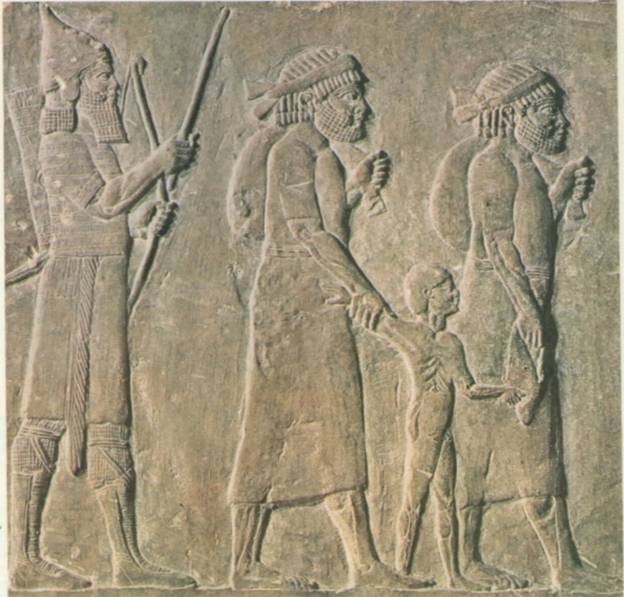 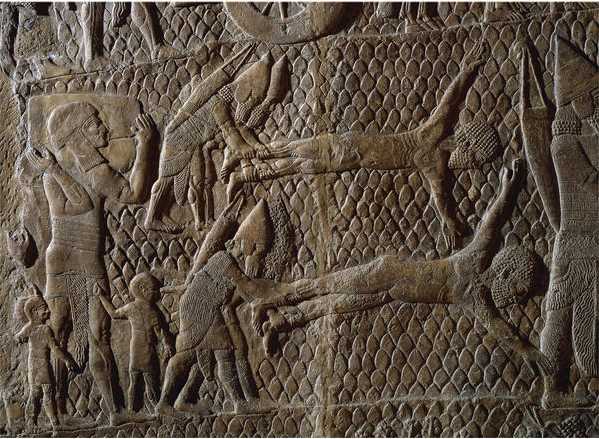 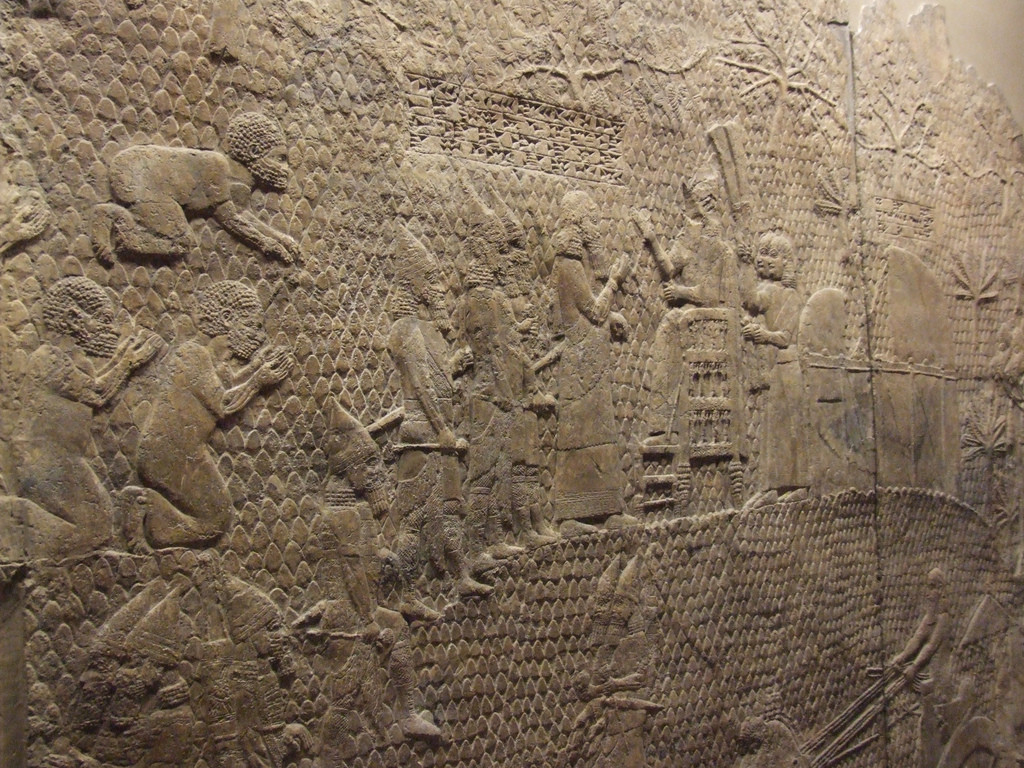 Detail of the Assyrian conquest of the Jewish fortified town of Lachish (battle 701 BC). Part of a relief from the palace of Sennacherib at Niniveh

15
What are the Twelve Tribes of Israel?
7
Why were the Israelites not circumcised in the desert?
3
What is the "Israel Mandate"?
1
Matthew 5:13-16 is for the Israelites ONLY?
3
From Genesis to Exodus - is God dealing with Israelites or Jews?
0
Did everyone tithe in Israel? When did the tithing come into the church?