What's the difference between a psalm, a hymn, and a spiritual song?

Is the difference between a psalm, a hymn, and a spiritual song/song from the Spirit defined anywhere in scripture or church tradition?

Paul said this to the Ephesians:

Ephesians 5:18-20 Do not get drunk on wine, which leads to debauchery. Instead, be filled with the Spirit, speaking to one another with psalms, hymns, and songs from the Spirit. Sing and make music from your heart to the Lord, always giving thanks to God the Father for everything, in the name of our Lord Jesus Christ. (NIV) 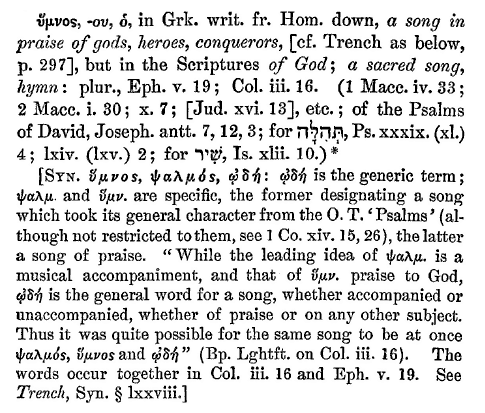 ύμνος, -ου, ο, in Greek writing from Homer down, a song in praise of gods, heroes, conquerors, [cf. Trench as below, p297], but in the Scriptures of God; a sacred song, hymn.

ύμνος, ψαλμός, ωδή: ωδή is the generic term; ψαλμός and ύμνος are specific, the former designating a song which took its general character from the Old Testament "Psalms" (although not restricted to them, see 1 Cor 14:15, 26), the latter a song of praise. "While the leading idea of ψαλμός is a musical accompaniment, and that of ύμνος praise the God, ωδή is the general word for a song, whether accompanied or unaccompanied, whether of praise or on any other subject. Thus it was quite possible for the same song to be at once ψαλμός, ύμνος, and ωδή" (Bishop Lightfoot on Col 3:16). The words occur together in Colossians 3:16 and Ephesians 5:19. See Trench, Synonyms §78.

Psalm: a song from the Book of Psalms, often accompanied
Hymn: a song of praise, often unaccompanied
Song: any song

Not the answer you're looking for? Browse other questions tagged church-history hymns music psalms .

26
What is the oldest hymn (with music) that is still sung in churches today?
8
Psalm 14 and psalm 53 are similar?
7
What is Matt Redman's denominational background?
7
Why does only one person "teach" during a church meeting?
4
Eastern Orthodoxy: what is the difference in character between each of the 8 modes?
4
When were "psalms and hymns and spiritual songs" in Colossians 3 first argued to refer only to the Book of Psalms?
5
Which Christian denomination removed trinitarian language from the hymn "Holy, Holy, Holy"?