Red Sea or Sea of Reeds?

I've heard a lot of religious chatter concerning what exact "sea" was parted by God to allow Moses and the Israelites to cross out of Egypt. Seems productions by the History Channel and other such sources have made statements about it but they also talked about the Mayan end of the world ideas. I know my bible says "Red Sea" but I've heard that could be a mistranslation.

I was just wondering if there was any solid evidence to support either location? Such as archaeological findings or other sources.

The original Hebrew term is yam suph, and the correct English translation is Sea of Reeds, as explained by this article:

The translation "Red Sea" is simply a traditional translation introduced into English by the King James Version through the second century BC Greek Septuagint and the later Latin Vulgate.

It is possible that this "Sea of Reeds" was actually the Red Sea, although this is very unlikely, considering the extraordinary logistics that would have been necessary, as the same article explains (with my own emphasis):

Some like to point out the great width of the sea as a further proof of the miraculous nature of the escape, since the Red Sea averages about 150 miles wide.

However, even among those who believe in a more literal perspective of the account of the crossing recognize that this is much too far for a large company to traverse in a single night. The miracle emphasized in the biblical account is the parting of the waters, not the speed at which they crossed or the amount of land covered. It is also a problem that the main body of the Red Sea lies much too far to the south to be reached by a large company of people in such a short span of time. So most would want to contend for the northwestern arm of the Red Sea, the Gulf of Suez, which is only about 17 miles wide at its narrowest point. This would mean a more northerly route for the exodus with a later turn to the south into the Sinai. But this still raises questions of logistics for the large company of people portrayed in the biblical account.

[T]he simple fact is, we do not know exactly what body of water is referenced by yam suph in Scripture.

I encourage you to read the linked article for a more thorough explanation of the text and geography, and some prominent theories on which bodies of water are considered candidates, as well as the rest of the route the Exodus may have taken.

I researched into this and found this page,

You should really visit the page for a detailed explanation on why the Hebrews called the Red Sea, Reed Sea.

Basically, reeds (freshwater plants) were seen on the shoreline of the Red Sea (saltwater). I assume that Moses and the Israelites did not have time to stop and taste the water to see whether it's salted or fresh. They saw fresh water plants outlining the shore hence, they knew it to be Sea of Reeds.

Names in biblical times and in Hebrew often symbolised a literal meaning rather then an exact location. One obvious example is the name Immanuel which means God with us. Does it mean the prophecy is fake because the Messiah's name was not Immanuel? No. So, just because the Red Sea today is not called the Reed Sea, it doesn't meant the Red Sea cited in the Bible is a mistranslation. I would think that modern people who translated the Bible found it easier to just put Red Sea because it is what it is.

Majority of the population (who read the Bible) do not study the Hebrew language. Hence, they would arrive at a conclusion that there is a mistake in the Bible (since there is no Sea of Reeds in modern context) when there actually isn't. What if this inhibits someone from Christ? It's not impossible. Now, the copyist wouldn't want that, would he?

The Reed Sea is the Red Sea today but the Reed Sea named by the Hebrew men is basically a literal perspective of what they saw. It is in no way a term for a literal location. One could even say it was a description, actually.

One way to find out which sea is intended by Yam Suph, "the Red Sea", is to look at its use in the Old Testament itself. Most of the references are simply references to the event described in the book of Exodus. But one is found in 1 Kings 9:26-28:-

"And King Solomon made a navy of ships in Ezion-geber, which is beside Eloth, on the shore of the Red Sea, in the land of Edom. And Hiram [King of Tyre] sent in the navy his servants, shipmen that had knowledge of the sea, with the servants of Solomon. And they came to Ophir, and they fetched from thence gold, four hundred and twenty talents, and brought it to King Solomon."

What is being referred to here as "the Red Sea" is clearly what is known today as the Gulf of Eilat otherwise called the Gulf of Aqaba which is the Eastern gulf at the north of the Red Sea. In that the Exodus involved crossing "the Red Sea" it is clear that it was known that what was crossed was part of the same waters as the waters at today's Eilat where Solomon built his fleet. 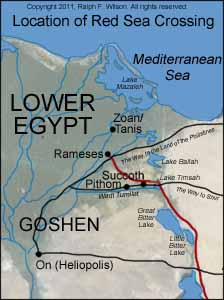 The start of journey showing (correct location of) Succoth in Wadi Tumilat east of Pithom, except they turned east onto The King's Highway (which ends at Heliopolis)

(It is disappointing how many maps on the web have Succoth incorrectly positioned. For a discussion of the location of Succoth in relation to Pithom see "On the Reliability of the Old Testament" by Kenneth Kitchen pages 256-259.) 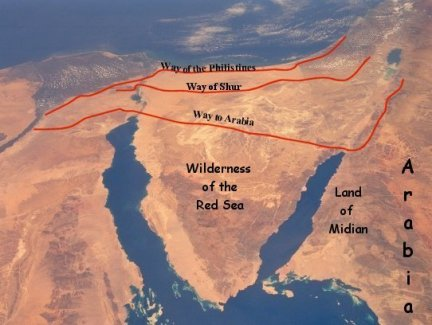 The Israelites travelled along the Way of Arabia, also called The King's Highway, just as Moses had done 40 years earlier 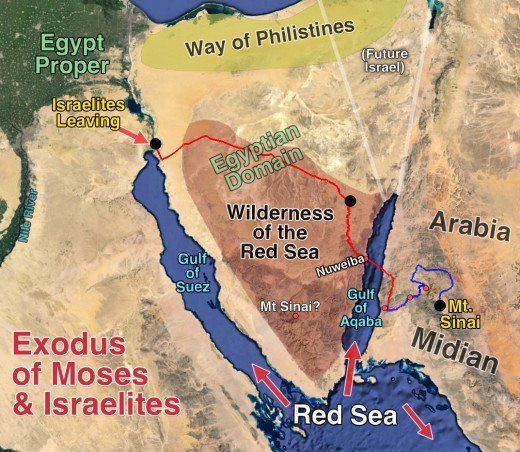 Off shore from the Nuweibaa Peninsula of the Gulf of Aqaba one probable Egyptian chariot wheel has been found on the sea floor. Other possible remains of chariots are covered in coral. So far it has not been possible to confirm these coral shapes cover manmade objects. 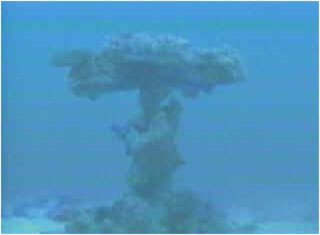 Perhaps one wheel at top and one on sea bed joined by the axel (which is vertical), covered in coral. 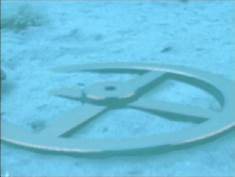 Remains of chariot wheel made of electrum (gold and silver mix) which the coral didn't want to grow on. 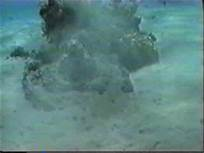 Another circular structure on the eastern coast of the gulf of aqaba opposite the Nuweibaa Penisula covered in coral. 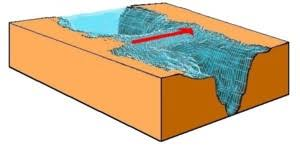 The Gulf of Aqaba sea floor showing the "bridge" at Nuweiba

The argument it was the Gulf of Aqaba which was crossed and in which the army and chariots of Pharaoh were destroyed can be seen here: youtube "The Exodus Revealed: Searching for the Red Sea Crossing" - https://www.youtube.com/watch?v=yTnqRpXKcaQ

Not the answer you're looking for? Browse other questions tagged moses exodus archaeology geography or ask your own question.