What common dog species were the ancient Jews familiar with?

The Bible tends to put dogs in a negative light, which may be appropriate: but I'm wondering if dogs of Bible times existed differently than our highly trained obedient breeds of our time.

Some dogs of our day actually perform some duties of a shepherd, being highly bred and refined. They are amazingly loyal and have a lot of empathy that most animals lack. In many ways they can be superior to sheep in domestic qualities (I'm not a sheep-herder, so I speculate).

So I ask a question based on the bible settings:

Were the dogs of biblical civilizations more wild or different than our highly refined ones of our day?

The only thing remaining in terms of the symbolism of the animal is it's extreme unclean habits.

What dog breeds and species (even non-domestic) were common among the Jews between the time of the exodus (which would include the Egyptian dogs) and the Christian era, where the 'little dogs' are seen in a positive light. What did a dog mean to an ancient Jew or ancient Christian?

Today, as well as in ancient times, it depends on where you are.

A grave example is Romania. Under Ceaucescu the country underwent a forced industrialization that resulted in people flooding the cities. To make room they tore down houses and built high-rises. But as apartments (generally) was small etc. dogs were left on the streets where they was left to breed. Today it is close to an epidemic.

There are also a lot of other places around the world that has similar issues. Wild dogs, and half-wild etc. are generally sick ridden, full of flees, can be really dangerous, etc.

From what I have read one had the same issues back in the day. Dogs roamed around outside (and surely inside) the cities. (They licked the wounds of Lazarus.)

And let's face it. Dogs are scavengers as well as predators. There are even several passages where dogs eat the flesh of man.

They also kept domesticated dogs as we for example read in Job (one of the oldest books):

Job 30:1: But now they that are younger than I have me in derision, whose fathers I would have disdained to have set with the dogs of my flock. (sheepdogs.)

In Mark we are presented with a verse that tells us dogs were also allowed in house (pets?):

Mark 7:28: And she answered and said unto him, Yes, Lord: yet the dogs under the table eat of the children's crumbs.

Dogs are lovely animals, but they can surely also be grim. Especially dogs that are not domesticated living from trash, carcasses, etc. There is also a reason we have expressions like dog-fights etc.

Even today it is common to use dogs as a way of low word. Bitch and "dog of a man".

Actually the word dog in GT has (mostly?) the strongs definition:

Not the most positive one.

At the same time the Hebrew word for dog is "kelev" and from what I have read Caleb (with Moses) actually comes from "dog". We know Caleb was faithful, has a big heart etc. but if this has any linkage is pure speculation on my part. The 16th century rabbi Maharal wrote that a dog is called "kelev" in Hebrew as it comes from "“k’lev," which means "like the heart" ... ;)

The first passage I can find is Exodus 11:7

But against any of the children of Israel shall not a dog move his tongue, against man or beast: that ye may know how that the Lord doth put a difference between the Egyptians and Israel.

As such it is worth mentioning Egypt. Dogs was wholly for the Egyptians and the Abuwtiyuw is one of the earliest documented domesticated animals we know of. It is believed to have been a guard dog. There are also paintings like this one: 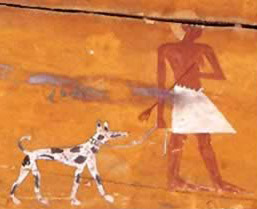 Generally dogs were used both as guard dogs, hunting dogs etc. in Egypt.

Find it difficult to say anything concrete about how dogs was used beyond as sheepdogs and (perhaps) some kind of house dog, but the verses about "throwing meat to the dogs" indicate that they might had dogs around beyond sheepdogs. If so the case of giving them unclean meat would also mean they acted like disposal animals. If not they would have had to get rid of unclean meat by other means.

Even though the word "dog" often are used in a negative setting the overall treatment of animals is very strict in the Bible. One shall treat them with respect and work animals are to be allowed to rest on Sabbath etc. In general: respect for the creation.

Small addendum. Not that much on species. Have not found any good source on that topic, but came across this paper while searching that I guess you find interesting:

The article also list quite a few resources that might shed some light on the topic of species.

From http://www.biblegateway.com/keyword/?search=dog&version1=KJV&searchtype=all&limit=none&wholewordsonly=no, which is searching for the word "Dog" in the "King James Version", there are only 40 verses that mention dog/dogs. It's kinda surprising!

29 Thou shalt not delay to offer the first of thy ripe fruits, and of thy liquors: the firstborn of thy sons shalt thou give unto me.

30 Likewise shalt thou do with thine oxen, and with thy sheep: seven days it shall be with his dam; on the eighth day thou shalt give it me.

31 And ye shall be holy men unto me: neither shall ye eat any flesh that is torn of beasts in the field; ye shall cast it to the dogs.

Note that in verse 29 and 30, the Lord addresses only one Israelite, denoted by the use of the t pronoun (most probably - the one who works and earns). However, in verse 31, the Lord uses the y pronoun, which means He meant that particular Law for every Israelite, men or women, of eany age, that they cannot eat the flesh of animals that have been killed by other animals but shall cast that kind of meat to the dogs. If the children did not have knowledge of the Law - this line shall the parents educate it unto them while the Laws with the t pronoun need not, since they have not come of age yet and could not work.

I have to go to work now and I will give my take on the next 39 or so verses when I can. Peace to you and have a blessed day ahead!

I've come back from work and meeting and am free to research. However, I will just do another one as you have accepted another answer and it would look kinda silly for me to post a 10,000 word essay on dogs :P

Though, I have to say I'm not sure why I missed the very first one in Exodus 11:7, it's probably due to the fact that I searched for "dogs" first instead of just "dog".

Anyway, I shall answer your question with the biblical context since it's something I enjoy - studying the Bible with a goal. All verses are only KJV.

There are actually many references in the Bible about dogs that are more suited to the Hyenas of our time than the domesticated doggy dogs. The second verse I quote is from Deuteronomy 23:17-19,

17 There shall be no whore of the daughters of Israel, nor a sodomite of the sons of Israel.

18 Thou shalt not bring the hire of a whore, or the price of a dog, into the house of the Lord thy God for any vow: for even both these are abomination unto the Lord thy God.

I searched homosexuality in animals and look who found a spot on the Wikipedia page? Yes, the Hyena!

Due largely to the female spotted hyena's unique urogenital system, which looks more like a penis rather than a vagina, early naturalists thought hyenas were hermaphroditic males who commonly practiced homosexuality. Early writings such as Ovid's Metamorphoses and the Physiologus suggested that the hyena continually changed its sex and nature from male to female and back again. In Paedagogus, Clement of Alexandria noted that the hyena (along with the hare) was "quite obsessed with sexual intercourse." Many Europeans associated the hyena with sexual deformity, prostitution, deviant sexual behaviour, and even witchcraft.

From this wiki, it would be safe to assume that the sodomite dog mentioned in Deuteronomy is,

This would really prove that the dogs of the Biblical times are probably Hyenas. But without science, every animal that looked like a dog was just called dogs. Furthermore, the jackal referenced in that wiki could be the Aardwolf which is often called the maanhaar jackal or civet hyena

There are of course, also domesticated (or tame, positive) dogs mentioned in the Bible as user129107 said in his answer. However, it is probably hard to discern from the Bible whether these dogs that actually have a positive light around them are actually from the same Hyena family or really are the dogs that look like our modern day german shepherds. However, I am pretty sure that when the dogs are in a negative light, it has to be a reference to the dog-like Hyena.

Hyenas were rampant way before our time and in larger number than other carnivores, I'm sure they were hard to miss with their public display of aggressive sexual activity :)

13
What were the beliefs, teachings, and practices of the church regarding slavery in the New World?
6
What was the Christian response to death-loving practices of Ancient Roman society?
14
In what order were the books in the New Testament written?
2
What evidence is there that the Herodians were distinct from mainstream Phariseeism?
9
What evidence is there that the Jews thought leprosy was due to sin?
2
What are the names of two thieves who were crucified along with Jesus?
1
What did Jesus do regarding the Jews believing that some diseases were sometimes due to sin?
10
Were the names Matthew, Mark, Luke and John common in the time of Jesus?
4
What were the godparent requirements back in the 1960s?
2
What were the views of the Church Fathers on Jews and Judaism during the Patristic Era?