What is meant by "atheism is a religion"? [closed]

Ask Question
Asked 7 years, 8 months ago
Active 7 years, 7 months ago
Viewed 833 times
8
Closed. This question is off-topic. It is not currently accepting answers.

I have heard this statement used by Christians. Atheists counter that the lack of belief isn't a religion or belief system. Is there a logical justification for the charge that atheism is a religion?

I'm looking for more than just appropriately defining the terms to make the sentence technically correct.

logic religion
Share
Improve this question
asked May 15 '14 at 3:37

Atheism is a belief system which makes claims about spiritual things. Atheism says there are no gods, but so do other belief systems which no one denies are religions, such as some forms of Buddhism. Atheism contrasts with religions, rather than social or political movements like egalitarianism, anarchism, communism, so it makes sense to classify it as a religion. In a way, atheism is the religious parallel of anarchism - just as anarchists deny political structures as being valid, atheists deny spiritual beings as valid. But that doesn't mean they shouldn't be classified as political and religious systems respectively.

There are some belief systems which are harder to classify as a religion or a philosophy, such as Confucianism. Compared to that there is no doubt which box atheism belongs in: the truths it claims are solely about spiritual things, and there is no shared philosophical or ethical framework among atheists.

I am not sure about the word religion, but one can argue that (a form of) atheism is a belief system.

A belief system is a system of beliefs. Some beliefs depend on others, forming an interrelated set of beliefs and their implications.

Strong atheism is defined as belief that there are no gods. Many call this just "atheism". Well, this belief has implications. For example -- how did life arise on Earth? It had to have happened in a "natural" way without intelligent design, etc.

A person may claim to have "no belief" but when they perform an action, there is usually a belief behind it. If I want to accomplish X, and I do Y, it is because I believe Y will bring about X. If someone tells me X will happen if I do Y, and I do Y anyway, it's probably because I don't fear X. For example, when atheists on youtube write blasphemous stuff, they are essentially believing that they won't be punished. That is part of their belief system.

Re-appropriating the term atheism is what is causing the issue. If we break the word down it is clear that the first definition should be "a belief that there is or are no god(s)." The prefix a has long been used as a reversal, or negation, for the term that follows it. The suffix ism has long been used for any kind of belief or organized thought system. The actual term is derived from the Greek word for god.

Here's what we are left with:

The confusion leading to this re-appropriation is from misplacing the negation. If we were to say that atheism means not a belief in god (notice the misplacement of the reversal/negation) then we are not being true to the word's structure and implied definition. The ism suffix already implies what it is, a belief or school of thought, and placing the negation on that is contradictory. The a does not negate the ism; it negates the root, theo. It is akin to saying that it is not a belief or school of thought, but (and the following might be better on philosophy.se) that is the same as saying that atheism and theism are in fact not opposites and are therefore in a different class of terms, which can lead one to think that they are not mutually exclusive, however their regular use suggests otherwise.

Atheists who want to re-appropriate the term's meaning are insistent that what they hold to is not a belief (however they might likely accept school of thought), so to overcome the above contradiction they replace the negation with the word lack, leading us to the second definition, "a lack of belief in God."

There is already a word for that, however: agnosticism. Agnosticism (also a school of thought, but not necessarily a belief) is characterized by confessing uncertainty on the topic entirely. Essentially, saying one is agnostic is the same as saying that one is unsure on whether there is a god or not. The term literally means "a school of thought that is without knowledge." They are unsure if belief in a god is warranted, therefore, there is a lack of belief.

And the inverse of atheist is theist, where one's opinion on the topic is certainty that there is/are god(s). We cannot call theism a belief and not also call atheism a belief.

This will naturally not convince any Atheists. They will still use the term freely, defining it as "the lack of belief," and adamantly insist that they are not believers in anything.

A compromise: Skepticism is an appropriate word for an agnostic who might believe if there was convincing evidence. Add on scientific skepticism and that would be appropriate for the apathetic position that some have toward all religion, because, in their mind, it cannot be scientifically supported.

This gets more complicated when looking at the historic use of the word Atheism. Centuries ago it was difficult for people to fathom a literal belief in the non-existence of any gods. And such a belief, which is somewhat common today, was rare at best then. The words that are often translated Atheism are often more used in the same sense as heathen. The ancients often used the word to describe that kind of person who "walked without religion." They were likely believers in something, but they did not participate in the rituals, the sacrifices, festivals, etc. They are "without religion".

In today's modern society, there is actually a sound argument for the non-existence of any god, based on scientific skepticism. But scientific skepticism is a relatively new concept. The method by which scientists reach conclusions only really met its potential starting about 200 years ago. Hence, terms are being forged and redefined to describe this "new" school of thought.

Now this is a sensitive topic for some people. Trying to place what you believe into a single word is difficult at best and laying down the three terms, theism, atheism, and agnosticism, and demanding that all persons fit neatly into only one of them is not fair to them and does a great disservice to the greatest of all human quests: finding meaning in our lives.

But with that said, the re-appropriation of atheism is confusing at best and completely redefining it at worst. It would be best to stick to the original meaning, the first definition I supplied, and if one finds oneself not quite fitting into the mold of one of the three then err on agnosticism when forced to use a single word and speak up to be heard when there is no such restriction. Even coin your own phrase if necessary; it might catch on.

The content of this post has been edited from one of my earlier posts on English.SE to match this question.

We define religion differently than they do. They define their set as an anti-set and we define it as an opposing set. The two definitions are incompatible and cannot be resolved. 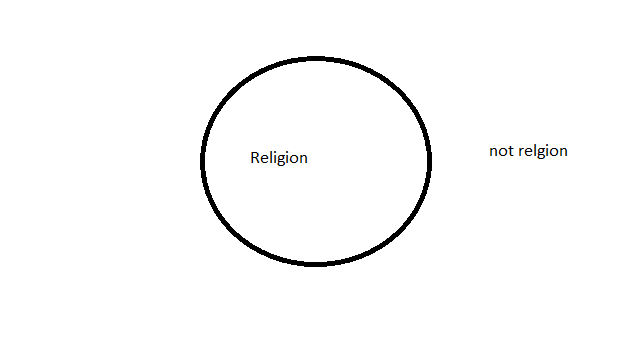 Athist view themselves as a set which does not contian relgion 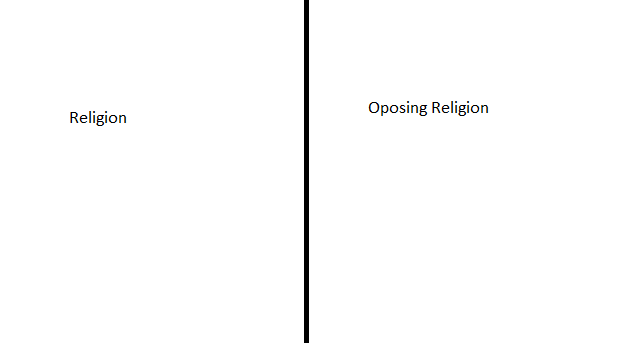 So in one position you could consider that since they believe in reality, and reality is God, then they really are a religion. Yet since the do not consider God to be reality. They won't accept that God means thing, and that all things are God.

They also are under work related laws that uniformly correspond between Christianity and also Atheism. For example:

Christian: Thou shall not bow down to an Idol.
Atheist: Correct Lifting Procedures.

Christian: Witchcraft do not enter into heaven.
Atheist: Drug Users do not get to go to work.

So like it or not they are under the Law of Error and Death. Yet it is better not to argue with them, For they will come to Christ by the Happiness that the Christians display upon there face.

Not the answer you're looking for? Browse other questions tagged logic religion .

3
How is Christian worship different than Christian religion?
7
What is the basis for Systematic Expository Preaching?
9
What is the basis for Topical Preaching?
2
What is "Christ Consciousness"?
5
What do Evangelicals who speak negatively of "religion" mean by that?
3
What was G.K. Chesterton's proof of original sin, and what is so unique about it?