At what age should my daughters start wearing a head covering when they pray?

Catholic tradition has generally dictated that women wear a head covering - be it a veil, mantilla, etc. - while at Mass. First and foremost, the 1917 Code of Canon Law stated: "...women, however, should be with head covered and modestly dressed, ..." The abrogating 1983 code seems to have eliminated this requirement, and so many women today do not wear a veil to church anymore. However, I believe that it is still required, as 1 Cor. 11:4-6 says:

Any man who prays or prophesies with his head covered brings shame upon his head. But any woman who prays or prophesies with her head unveiled brings shame upon her head, for it is one and the same thing as if she had had her head shaved. For if a woman does not have her head veiled, she may as well have her hair cut off. But if it is shameful for a woman to have her hair cut off or her head shaved, then she should wear a veil.

In addition, Laura Bush, Michelle Obama, and Nancy Reagan, all wore short veils (not only during mass times, but all throughout the Vatican) during their visit with the Pope: 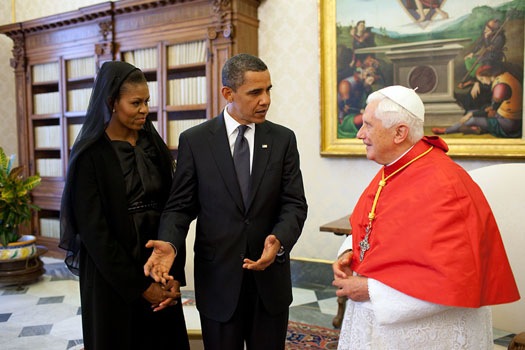 That's because the State Department makes sure that all American dignitaries follow the protocols and customs of the foreign governments they visit. So, clearly there is a requirement - or at least expectation - that women wear a veil to church, as the State Department clearly advised Michelle Obama to do so, and would not have had there been no expectation. Vatican canon law also says that later Canon Law abrogates earlier Canon Law only when this is made explicit and that, in cases of doubt, the revocation of earlier law is not to be presumed; quite the opposite. Based on this, we can assume that the tradition is still alive:

Canon 20 A later law abrogates or derogates from an earlier law, if it expressly so states, or if it is directly contrary to that law, or if it integrally reorders the whole subject matter of the earlier law. A universal law, however, does not derogate from a particular or from a special law, unless the law expressly provides otherwise.

Canon 21 In doubt, the revocation of a previous law is not presumed; rather, later laws are to be related to earlier ones and, as far as possible, harmonized with them.

I remember my mother wearing a veil when she took our family to church in the 1970's, but all of our family stopped going after I entered high school when my father lost his job. I never wore a veil to church. So now, in the present, I am married and I currently have two daughters, one is high school age and the other one is a toddler. I would like to have them wear veils at some point, as I remember my mother wearing one and I believe that it is my duty to pass this custom onto my children, especially since I never wore one when I was young. However, I am wondering if it is appropriate. The Bible and Christian traditional only requires that a "woman" wear a veil. So at what point does a girl become "woman" enough where wearing a veil would be appropriate, and what type of veil should be worn?

I've looked this question up online, and answers vary. Some parents have their daughters wear a chapel veil or bonnet as soon as they can hold their heads up while wearing one (around two or three maybe). Other families believe after First Communion, some say puberty, others say age eighteen (the age of majority in the Catholic Church), and yet others say marriage. Some say no veil at all, which I don't support. Many others that I have asked personally say that it shouldn't be done because it is no longer required. But, what do tradition, Catholic teaching, and the Bible say about this? What is a good age to begin my children with a veil?

There is currently no requirement in the Catholic Church that women or girls wear a veil. This has technically only been the case since 1983, when the current code of canon law was promulgated.

The 1917 Code of Canon Law did enforce this as a rule:

[Men, either in the church or out of the church, ought to have heads bare while they assist at the sacred rites, unless otherwise justified by established traditions of the people or by particular circumstances. Women, on the other hand, certainly should approach the Lord's table with head covered, and modestly dressed. – my translation]

The 1983 code, however, abolished this rule along with the rest of the 1917 code of canon law and associated rules:

When this Code takes force, the following are abrogated:

(Note: you do state that "Vatican canon law also says that later Canon Law abrogates earlier Canon Law only when this is made explicit"; this seems pretty explicit to me.)

If it is not a rule of canon law, is it perhaps addressed by Catholic belief? If so, one would expect to see something about it written in the Catechism, or perhaps addressed by the bishops. I don't see anything to that effect, though. A search through the Catechism reveals no results for "mantilla", and nothing for "veil" as an article of clothing. A quick search through the website of the U.S. Conference of Catholic Bishops for "mantilla" as an article of clothing yielded only a few references, mostly on the Spanish-language pages discussing wedding clothes. I conclude that it is not at all a requirement anymore, certainly not since 1983.

Note: Traditionally, it appears, protocol for papal audiences—particularly for private audiences—has been quite strict and has required among other things that a woman wear a black mantilla; you can see this on Mrs. Obama's head in the picture you post. I cannot find an authoritative statement on whether this is still required as protocol; however, even if it is, it applies simply to visits to the Pope, not to Mass-going in general.

Various cultures and geographic areas—particularly Italy, Spain, and Latin American countries and peoples—have a tradition of wearing a mantilla (chapel veil) independent of any rule of canon law. Since wearing one is certainly not "contrary to the prescripts of this Code" (there's nothing in the current code that says wearing one is wrong), it is an option which Catholic women (and girls) may choose, but which they need not. Under such circumstances it seems understandable for the Church not to legislate an age at which one might consider such a thing, and thus Catholic teaching says nothing at all about the age at which one might begin wearing a chapel veil.

As for tradition and the Bible: certainly Paul does refer to "women" in the passage you cite, but of course he offers no definition for "women". Current canon law sets 18 as the age of majority in the Church (canon 97 sec. 1), 16 as the minimum age at which a person can be affected by penalties in Church law (canon 1323 note 1), 14 as the minimum age at which a woman can marry (canon 1083 section 1—note, dioceses may set a higher minimum), and 7 as the age at which they are responsible for their own acts (canon 97 sec. 2). Any of these might be reasonably considered appropriate to decide whether a young lady is "old enough"; but again there is no official standard.

When it used to be common practice to wear veils, girls wore veils to their first communion. I don't recall if they wore veils any younger than that. These days you're free to do as you please, so there is no "right" answer sanctioned by the church any more, if there ever was. You may be able to find a traditionalist Catholic group practicing the old rites who you can ask for a more definitive answer relative to the old practice.

Not the answer you're looking for? Browse other questions tagged catholicism religious-practice .

8
Has the notion of "legitimacy" been abandoned in the Catholic Church?
7
Is there any connection between minimum age for marriage in Catholic Church and tradition about Mary's age at Annunciation?
2
Why doesn't the Catholic Church ordain women to be deacons?
6
Catholic restricted from Communion
6
May the Pope waive the requirements of Canon Law in the appointment of bishops?
4
Questions about this icon of Saint Sophia
3
What is the origin of the cope?
1
Was any transgender person ever ordained as a Catholic priest?
1
Is the sign of the Cross as well as the crucifix a Catholic “trade mark”?