How do Protestants explain the incorruptibility of Catholic and Orthodox saints?

As far as I know, there is a vast body of evidence of incorruptibility of some saints in Catholic and Orthodox Churches. Here is a picture of the incorruptible relic of St. Aleksandr Svirskij from Wikipedia : 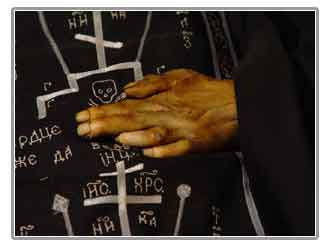 Such cases have often been presented as a proof of the correctness of the Catholic and Orthodox Faiths - as opposed to the numerous Protestant faiths (as far as I know, there are no cases of incorruptibility in Protestantism).

I wonder if any attempts have even been made in the main-stream Protestantism to explain this body of evidence or was it simply ignored?

If there were such attempts made, then what main points have been presented?

As it applies to your question, there are two basic flavors of Protestantism. One kind consists of groups that have some form of centralized organization who could at least be said to have an “official” stance on a given position. The other kind has no formal centralization (they believe each congregation—and individual—to be autonomous in terms of specific beliefs and practices) and, thus, no capability of having an “official” stance on any position.

Since the latter vary widely in their particular beliefs, it is impractical to seek out sources since individuals would choose whether or not to agree with them. You might find academics who consider themselves a part of these groups, but their statements are by no means representative of other similarly self-proclaimed denominational adherents.

Though the second kind has no hope of providing an answer, the first kind does have the capability of providing official statements of doctrine. The difficulty here is that if they do not, generally, have “official” statements or lists about things that they do not believe.

Here are a few major protestant denominations. For most of them, I could not find any information with searches or examining documents of core beliefs. The search term “relic” frequently turned up results, but I could find few references to “holy relics.” Most of the search results were only to documents containing the common English use of the word signifying “an object surviving from an earlier time.” If this silence says anything, it says that the holy relics of Roman Catholicism and Orthodoxy get far less mention than the common use of the word.

Lutheran (Missouri Synod): No mention of incorruptibility or relics

(from the Thirty Nine Articles of Religion)
The Romish Doctrine concerning Purgatory, Pardons, Worshipping and Adoration, as well of Images as of Relics, and also Invocation of Saints, is a fond thing, vainly invented, and grounded upon no warranty of Scripture, but rather repugnant to the Word of God.” - See more at: http://www.anglicancommunion.org/resources/acis/docs/thirty_nine_articles.cfm#sthash.y10sue2g.dpuf Presbyterian

Methodist (There is more than one group with “Methodist” in the name, but I think the United Methodist Church is the largest.)

Baptist (There are many types of Baptists, but the Southern Baptist Convention is a convocation to which many Baptist congregations subscribe.)

As a rule, Protestant churches either deny the sanctity of incorruptibility and relics, have no official position on the matter, or have no “official” positions whatsoever.

It might be possible to find treatments of the matter conducted by Protestants, but these would only be working from within a belief framework adhering to a particular protestant group’s beliefs (and almost certainly not uniformly) and nothing like an official position. How you would define credibility in this regard is somewhat subjective.

Probably the biggest serious objection that any disbelieving (in incorruptibility) protestant would make is that this belief has no basis in Scripture. The vast majority of protestant groups operate sola scriptura.

Though it's difficult to speak for Protestants as a whole, my experience with them is that they place no significance on incorruptibility, and as a rule, they are suspect of relics possessing special properties. Nobody will deny evidence that an undecomposed dead body is in an unusual state, but I doubt that many of them will claim that such a state is definitely an act of divine intervention because of the person whose body it is. It might be safe to say that Protestants are much less mystical than Roman Catholic and Orthodox groups.

As another answer has implied, Protestants receive their doctrines via the principle of sola scriptura, that is, they do not rely on the traditions of men to inform what constitutes valid religious practice, but rely on the teaching of scripture made plain by the assistance of the Holy Spirit. The scriptures do actually teach us about "incorruptibility", and what they teach us indicates that use of the term by the Eastern Orthodox and Roman Catholics is grossly misleading:

Now this I say, brethren, that flesh and blood cannot inherit the kingdom of God; nor does corruption inherit incorruption. Behold, I tell you a mystery: We shall not all sleep, but we shall all be changed— in a moment, in the twinkling of an eye, at the last trumpet. For the trumpet will sound, and the dead will be raised incorruptible, and we shall be changed. For this corruptible must put on incorruption, and this mortal must put on immortality. So when this corruptible has put on incorruption, and this mortal has put on immortality, then shall be brought to pass the saying that is written: “Death is swallowed up in victory.” “O Death, where is your sting? O Hades, where is your victory?” - 1 Corinthians 15:50-55 NKJV

We see from this passage, that corruptibility is a characteristic of pre-resurrection bodies whether they are alive or dead physically; Whereas, incorruptibility is a characteristic of post-resurrection bodies only. To apply to a dead body - the very epitome of corruption - the term "incorrupt" is a serious perversion of the word and has resulted - nay continues to result - in superstitions that obscure the pure gospel of Christ. As regards to why there has been a beyond-expected slowing of the normal processes of decay upon the decease of certain individuals, this is a legitimate subject for scientific enquiry (and so far, such examinations have found naturalistic causes in each case), but I note that the natural mummification of corpses is not unheard of under certain circumstances and many of these people may have engaged in excessive fasting over the course of their lives to the extent of dramatically altering what has been commonly thought of as the normal process of decay. To attribute this condition to a particular level of piety in certain individuals on the one hand, but to seek to explain it via naturalistic processes in cases like Otzi the Iceman on the other, would seem to require no small measure of logical inconsistency.

What is the basis of belief in incorruptibility of saints in Eastern Orthodoxy anyway? I would presume its based on an interpretation Psalm 16:10 "For thou wilt not leave my soul in hell; neither wilt thou suffer thine Holy One to see corruption." But while Eastern Orthodox and Catholics may put an interpretation on this that suits their particular theology, Protestants stick with the New Testament's own interpretation of this verse, which confines its meaning to Jesus alone, as is found in Acts 2.

29 Men and brethren, let me freely speak unto you of the patriarch David, that he is both dead and buried, and his sepulchre is with us unto this day. 30 Therefore being a prophet, and knowing that God had sworn with an oath to him, that of the fruit of his loins, according to the flesh, he would raise up Christ to sit on his throne; 31 He seeing this before spake of the resurrection of Christ, that his soul was not left in hell, neither his flesh did see corruption. 32 This Jesus hath God raised up, whereof we all are witnesses.

This doesn't leave any room for the theology of relics and the pretense (for so most Protestants would term it) that certain men's bodies have not corrupted, for if Peter is right that the Psalmist speaks of Christ alone, then its plain impossible.

Furthermore, later on, in Acts 13, Paul explains it the same way, this time affirming that David himself (a saint obviously) did indeed see corruption, and making it even plainer that incorruptibility belongs to Christ alone.

35 Wherefore he saith also in another psalm, Thou shalt not suffer thine Holy One to see corruption. 36 For David, after he had served his own generation by the will of God, fell on sleep, and was laid unto his fathers, and saw corruption: 37 But he, whom God raised again, saw no corruption.

Are EO and Catholic saints greater than David that they don't see corruption while he did? Or is it rather that this only applies to Christ as Peter and Paul both teach according to Acts? You decide.

Protestants hold to the new Spiritual birth spoken of by Jesus Christ to Nicodemus:

John 3:5 Jesus answered, Verily, verily, I say unto thee, Except a man be born of water and of the Spirit, he cannot enter into the kingdom of God.

Protestants trust that salvation is by God’s grace through faith alone not of works. Protestants believe their life works will be tested by fire to determine their source:

Ephesians 2:8,9 For by grace are ye saved through faith; and that not of yourselves: it is the gift of God: Not of works, lest any man should boast

Therefore, the question of incorruptible relics of the Protestant, they are personally accumulated throughout one’s own personal life and proclaimed as a personal testimony:

1 Peter 3:15 But sanctify the Lord God in your hearts: and be ready always to give an answer to every man that asketh you a reason of the hope that is in you with meekness and fear

Protestants take personal responsibility for the administration of the “Key to the Kingdom” within their personal life. Historically,the Reformation was the official act of separation from the Earthly Magistrate. The Catholic claims to know where “grace” is but it makes no claim where “grace” is not. Therefore, a Protestant is only one that assumes responsibility for the administration of the Keys to the Kingdom within their own personal life, yet they hold to be a member of “one holy catholic and apostolic Church”.

The Protestant has no personal obligation to explain nor deny the incorruptibility of Catholic and Orthodox Saints.

For the Protestant who is truly born again, and not just a nominal Protestant, the question would be: Where in Scripture does it ask us to take the slightest bit of notice of this kind of thing?

"To the law and to the testimony: if they speak not according to this word, it is because there is no light in them". Isaiah 8:20. And "law", "testimony" and "word" all have reference to the Holy Scriptures themselves.

If anyone believes that these dead bodies have any value in determining what is truth or which denomination is true then it can only be because "there is no light in them".... that is not what I am saying. It is what the Prophet Isaiah is saying.

Not the answer you're looking for? Browse other questions tagged protestantism relics incorruptibility or ask your own question.

8
How did Luther view relics, like the 'preserved head of John the Baptist'?
3
Does the incorrupted body of St.Cecilia still exist?