What does this Catholic symbol mean?

I have this symbol over the entrance of my apartment. I have been told it is a Catholic symbol, and the owner of the flat is probably Catholic since it is the dominant faith here.

Searching on Google has not brought much information. Any idea what it means? 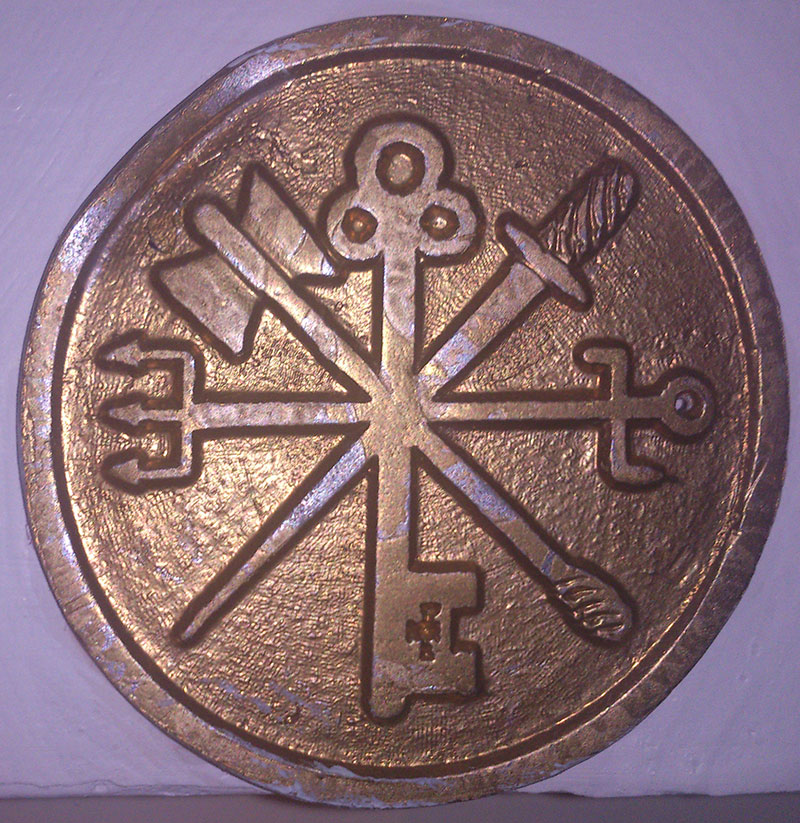 I believe these are symbols of martyred apostles.

Jacob Prahlow has collected some research.

Although an upside-down cross is associated with Peter, he was given the keys of the kingdom (Cf. Matthew 16:19) and the key is a very common symbol.

Paul, a Roman citizen, was executed by the sword rather than crucified. While the date of his death is rather hazy, the place is known and there is an enormous basilica on the site. Paul is very often depicted with one or two swords: the sword of truth and the sword of martyrdom.

Both Matthew and James brother of John are traditionally held to have been martyred by beheading. James is recorded in Acts 12 as being killed “by the sword” — Matthew’s death is not recorded, but one tradition is that he died by the axe.

One legend of Thomas’ death in India is that he was killed with a trident.

Not the answer you're looking for? Browse other questions tagged catholicism symbolism or ask your own question.

16
What is the Catholic position on Exodus 20:4?
3
Why are many protestants hesitant of the reappropriation of symbols?
1
According to the Catholic Church in her recent pronouncements, what is the order of truths to which the believer adheres?
2
What if Israel had accepted Jesus as their Lord? (Catholic perspective)
4
Matthew 18:10 “Children's angels always behold the face of the Father” - what does this mean?
3
How to know when a particular verse of the Bible have been or will be part of the Liturgy of the Word? (Catholic)
4
Minimum age of marriage in the Catholic Church through the ages
3
Was this (allegedly gay) marriage in a Catholic Church valid?
3
What does Western Catholic infant baptism and confirmation involve, especially with regard to being identified as a Catholic?