This question deals with pouring the wine into one chalice instead of many individual small cups for the congregants to consume. In my experience, I've observed that the wine is always poured into a single chalice, never into individual cups. Is it to conserve resources, or is there a theological reason behind this practice?

The practice is entirely biblical. At the Last Supper, Christ took a single cup at the end of the meal and handed it round the apostles:

Mt 26:27 And he took a cup, and when he had given thanks he gave it to them, saying, “Drink of it, all of you; for this is my blood of the covenant, which is poured out for many for the forgiveness of sins.”

The General Instruction of the Roman Missal has this:

A related question is why there tend to be individual wafers rather than a single large bread roll or loaf which is divided amongst the congregation. This is because of its change of substance: “This is my body,” which means that any crumbs must be dealt with. Tearing or cutting a loaf, while a valid symbol of the distribution, would create so many crumbs that it would be impossible to deal with. A wafer with sealed edges produces far fewer problems. Generally the wafers are consecrated in and distributed from a single vessel [ciborium].

There is no reason preventing more chalices form being consacrated, but usually catholics uses olny one cup mainly for pratical reasons: since there is no need for each faithful to receive the Blood, in most cases only the priest drinks it, so one cup is enough.

Even when there are more priests, each one takes only a little sip from the same cup (possibily cleaning it before passing it). That's because Jesus used only one cup during the last dinner - but no rule forces churches to a single cup. It's a tradition, and a practical reason.

Interestingly, no-one has mentioned the symbolism of sharing the one cup. I frequently celebrate Mass with a monastic community where the precious blood is consecrated in one large chalice and then poured into smaller chalices for the communion. As to the host, the missal proposes the use of larger hosts that can be brokenand shared with the congregation. Indeed the GIRM 321 seems to imply that the use of small individual hosts comes secondary to sharing a broken larger host.

There are at least four common reasons why this generally is not done. I say generally speaking, because I know of a few situations in my own archdiocese where this innovation has actually taken place.

The main reason why this custom is not really popular in Catholic parishes is as follows:

The comment of AthanasiusOfAlex to Andrew Leach‘s answer is most fitting here.

“I should also point out that, although there is nothing in principle preventing dozens of small chalices from being consecrated, they would have to be (1) made of, or at least plated with, gold or silver or other precious material, which would be expensive, and (2) they would each have to be purified by the priest or deacon (or an instituted acolyte), which would be time-consuming. There is, moreover, no need for the faithful to receive from the cup (the entire Sacrament is present in the bread), and in practice not everyone does so—hence the excess Sanguis would have to be consumed.” – AthanasiusOfAlex

The few occasions where I have witnessed this innovation being taken place, the Precious Blood was distributed in something very similar to what you see in the following image. It does seem somewhat inappropriate to Catholic Mass to say the least. 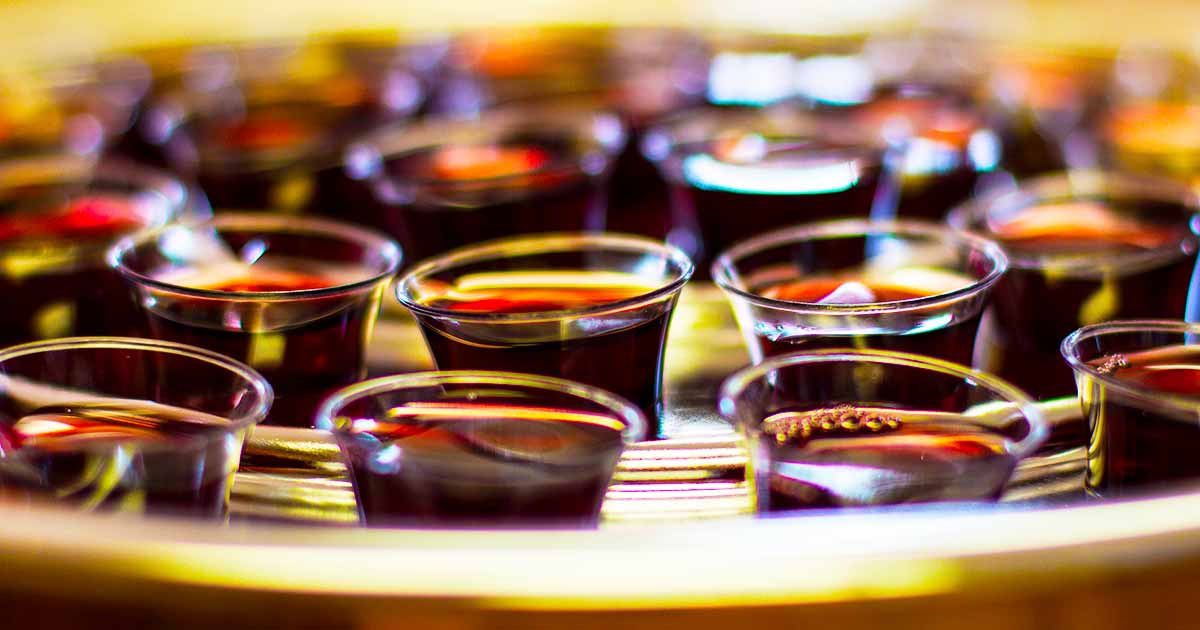 Do the Scriptures Authorize Multiple Cups?

Not the answer you're looking for? Browse other questions tagged catholicism communion liturgy mass blood-of-christ or ask your own question.

8
Why do some Protestants divide the Blood of Christ into individual cups?

8
Why do Catholics believe that it is a priest's blessing that transforms the elements into the body and blood of Christ?
4
What theological statement would be made if the Creeds preceded the homily?
10
Why would one literally eat the body of Christ, if it is literal?
8
Why do some Protestants divide the Blood of Christ into individual cups?
8
What role does the New Covenant play in Reformed Theology?
7
What would happen if the Pope were to abuse his power?
3
Is it allowed to receive the Precious Blood before the Body of Christ in a Catholic Mass?
0
Why don't Catholics believe that Christ's atonement removed Original Sin?
3
Why the differences between the Maundy Thursday Mandatum and the Eucharist?