What is the current Catholic church's view on Haitian Vodou?

Haitian Vodou is the syncretic result of African spiritual systems and Catholicism, basically merging as a result of the transatlantic slave trade and travel to the new world. Many Haitians who practice Vodou consider themselves Christian.

What does the Catholic church currently think of it?

The voodoo is frowned upon by the Catholic Church, but (in practice) it is tolerated as many other pagan practices, especially in underdeveloped countries. This is what We call "religious syncretism".

In 2011, Benedict XVI blasted "occultism and evil spirits" in an audience of priests, seminarians, religious and laity in the St. Gall Seminary in Ouidah.

"The love for the God who reveals himself and for his word, the love for the sacraments and the church, are an efficacious antidote against a syncretism which deceives,” the pope said this morning in Ouidah.

“This love favors the correct integration of the authentic values of cultures into the Christian faith,” he said. “It liberates from occultism and vanquishes evil spirits, for it is moved by the power of the Holy Spirit.”

When John Paul II visited Benin in 1993, his trip coincided with a major national celebration of the country's voodoo heritage titled "Ouidah 92." The pope met a voodoo high priest, with a picture of that encounter splashed across the front page of L'Osservatore Romano, the daily Vatican newspaper. 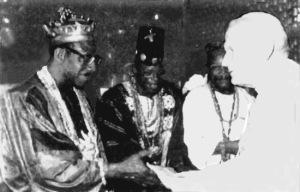 That encounter has long been controversial in more traditional Catholic circles, who regarded it as tantamount to a papal endorsement of heterodox worship. On this trip, Benedict has expressed admiration for elements of traditional African religion, but has also been careful to condemn "syncretism" and to condemn what he sees as its negative elements.

Not the answer you're looking for? Browse other questions tagged catholicism vodou syncretism or ask your own question.