Does The Book of Mormon contain Jewish literary techniques?

According to Latter-day Saints, The Book of Mormon was written by ancient prophets who originated from Jerusalem (contemporaries with Jeremiah, in fact), then later traveled to the Americas.

As far as we have it today, the Bible is replete with Jewish (and Greek) characteristics directly in its language and writing. It contains poetry/songs, chiastic structure, acrostics, etc.

The Book of Mormon is rich with chiasmus, which is a symmetric structure that looks something like ABCDCBA, fairly unique to Hebrew culture. That article outlines several instances of chiastic structure.

Additionally, there are more Hebraisms scattered throughout.

Remember: Mormons will be quick to remind anyone that these scholarly topics, though interesting, have little significance in the LDS Church, which is primarily focused on the spiritual teachings in The Book of Mormon, and that seekers of truth—which we on this site are not—should pursue spiritual, not scholarly, evidence.

John Woodland Welch, a Mormon (LDS) law and religion scholar who has written a number of learned articles on the the Mormon scriptures, says the Book of Mormon contains a long and complex chiasmus in Alma chapter 36, as well as smaller chiastic structures elsewhere in the book. The significance of this is that it seems unlikely that Joseph Smith or his associates would have been able to use such an advanced rhetorical device, thus improving the chances of the Book of Mormon being of ancient origin. He says ('Chiasmus in the Book of Mormon'):

This is truly an amazing passage of scripture, both in its rich content and in its complex structure. Alma has skillfully framed the story of his conversion with chiastic panels for the sole purpose of drawing our attention to the centrality of Jesus Christ in that conversion.

Acording to Bowman, the following table briefly summarises his assessment of the purported chiasmus in Alma 36, according to Welch’s own criteria: 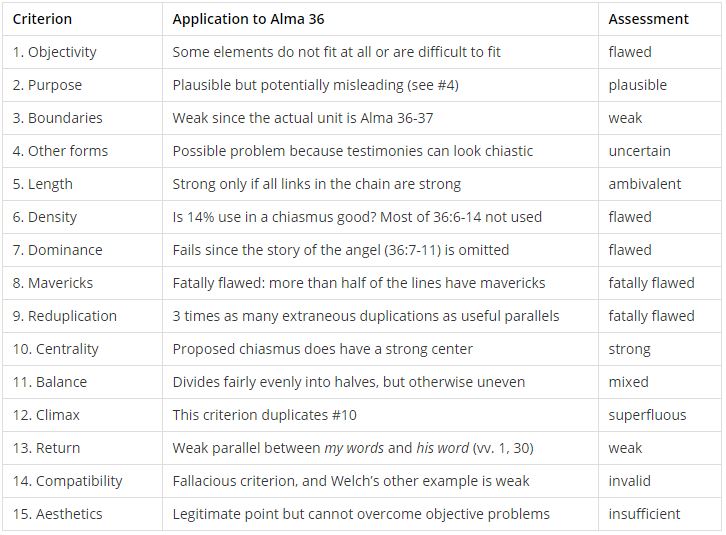 Bowman simply believes that Welch found a single pair of statements that would make a good centre for a chismus, then used his ingenuity to build a chiasmus around it. Not dishonestly, but as a triumph of faith over study.

Not the answer you're looking for? Browse other questions tagged lds book-of-mormon .