What is the evidence that the bones found under St. Peter's Basilica are actually St. Peter's bones?

There were some bone fragments found under St. Peter's Basilica in the 1940's. Pope Paul VI said in 1968 that the bones were "identified in a way that we can consider convincing." What is the convincing argument that these bones are indeed's St. Peter's?

A perfect answer will include the details about how the bones were found.

On a related note, the bones have recently been made available for public viewing for the first time. During a Mass, Pope Francis seemed to venerate the relics, which may mean that the Church will officially declare them as St. Peter's bones.

A lot of the evidence is circumstantial, so it's probably a matter of opinion whether it's convincing or not:

Unfortunately, I think the details that would make this closer to the "perfect answer" you asked for run afoul of one of the StackExchange guidelines for what not to ask:

"Your questions should be reasonably scoped. If you can imagine an entire book that answers your question, you’re asking too much."

Among the books that cover this are:

The texts of (and some pictures from) these 3 books can be found on this site.

TWhat is the evidence that the bones found under St. Peter's Basilica are actually St. Peter's bones?

The bones of St. Peter show the following points of interest:

In December 1950 Pope Pius XII announced that bones discovered during the excavation could not conclusively be said to be Peter’s. Two decades later, in 1968, Pope Paul VI announced that other bones unearthed beneath the basilica—discovered in a marble-lined repository, covered with a gold and purple cloth and belonging to a man around 5′ 6″ tall who had likely died between the ages of 65 and 70—were, in the judgment of “the talented and prudent people” in charge of the dig, indeed St. Peter’s.

Deep in the earth below the great basilica of St. Peter’s in Rome the clink of pickaxes and the scrape of shovels in the hands of workmen have been echoing dimly for 10 years. In the utmost secrecy, they have penetrated into a pagan cemetery buried for 16 centuries. Architects feared they might disturb the foundations on which rests the world’s largest church. But the workmen, with careful hands, pushed forward finally to the area where, according to a basic tenet of the Catholic Church, the bones of St. Peter were buried about A.D. 66.

The Church has always held that Peter was buried in a pagan cemetery on Vatican Hill. Now, for the first time, there is archaeological evidence to support this: the newly discovered tombs, which LIFE shows [in these exclusive pictures].

The greatest secret of all—whether the relics of the Chief Apostle himself were actually found —s one which the Vatican reserves for itself, although there have been rumors that the discovery of the relics will be announced at an appropriate time during the Holy Year. - LIFE at the Vatican: Unearthing History Beneath St. Peter’s 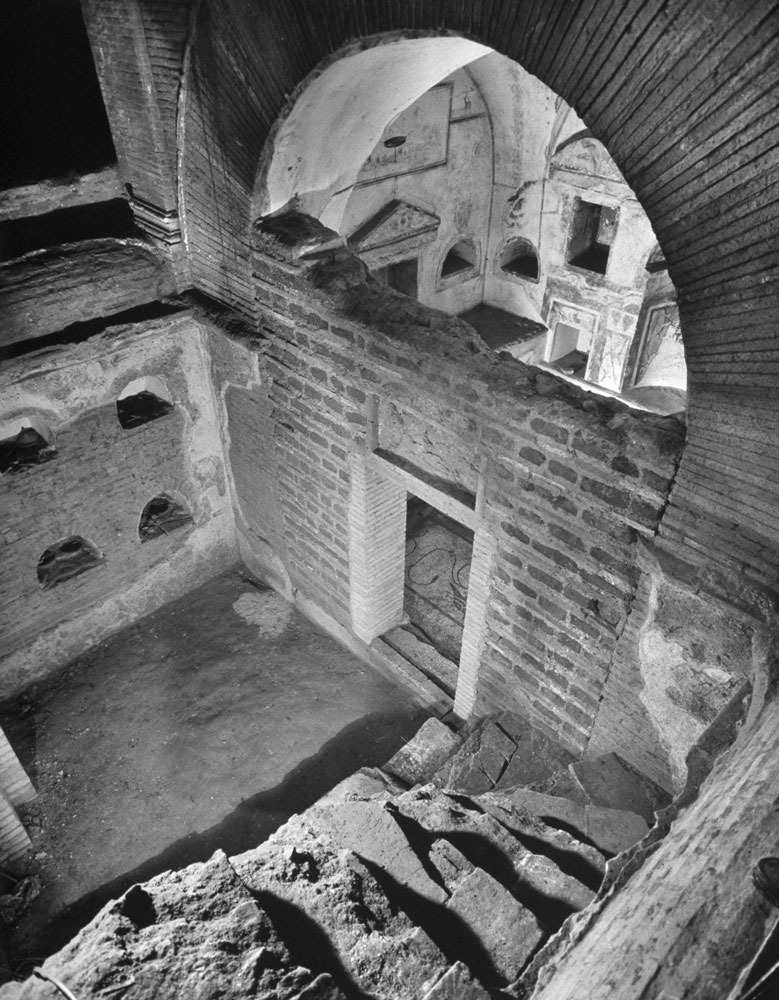 The oldest burial chamber found during the excavation beneath St. Peter’s in Rome, 1950. 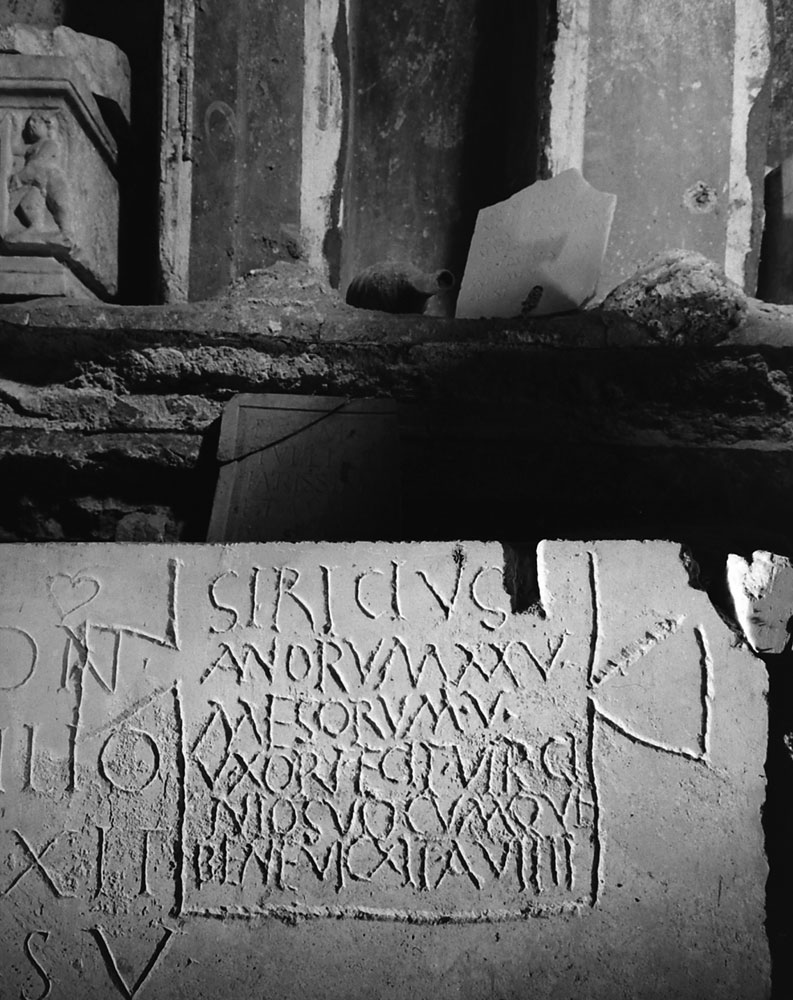 An inscription revealed during the excavation beneath St. Peter’s in Rome, 1950.

What might seem more than just a simple coincidence is that Our Lord said to St. Peter that he is the rock upon which He was to build His Church. When Pope Pius XI died (February 10, 1939), his successor Pope Pius XII ordered that a place be made available to put the body of his predecessor in the lower crypt area in the Vatican Basilica. In doing so workers discovered the ancient necropolis of Vatican Hill.

What they found during these excavations, which for many years was done in almost total secret, partly because of the World War II, was utterly amazing.

During excavations under St Peter’s Basilica that began after the Second World War, archaeologists discovered a funerary monument with a casket built in honour of Peter and an engraving in Greek that read "Petros eni", or "Peter is here". - Bones attributed to St Peter found by chance in 1,000-year-old church in Rome

For those interested in visiting the Vatican Necropolis, it should be noted that visitors are permitted to visit the necropolis, or as it is officially known at the Vatican as La Scavi!

Only a small portion of the bones of St. Peter have been removed. The rest lay where they were originally found. Do not take my word for it. Go and look yourself. I did! 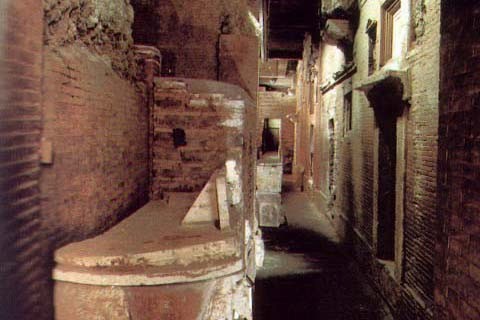 Special visits to the necropolis underneath the Basilica, where the tomb of St. Peter is located, are only possible following special permission granted from time to time by the “Fabbrica di San Pietro”. Visits are organized according to the schedule set by the Excavations Office.

The guided visit lasts about an hour and a half. We kindly inform all visitors to the necropolis that environmental conditions will be different underground, with possible increase of temperature and humidity. Those who suffer specific and serious physical problems that could be effected by these conditions, including claustrophobia, should not visit.

Note: Due to the Coronavirus outbreak all Roman Catacombs are temporally closed.

During excavations under St Peter’s Basilica that began after the Second World War, archaeologists discovered a funerary monument with a casket built in honour of Peter and an engraving in Greek that read "Petros eni”, or "Peter is here". - Bones attributed to St Peter found by chance in 1,000-year-old church in Rome

The following may also be of interest:

Not the answer you're looking for? Browse other questions tagged catholicism peter relics .

14
What evidence is there that Peter was a bishop in Rome?

2
Can anyone explain Pope Paul VI's arguments in favor of Padre Pio?
13
Do Catholics believe that they are actually eating the body of Christ? Does this make them cannibals?
4
What is this box that can be found in Catholic churches?
8
What are the Church fathers' arguments that Peter is the rock?
14
What evidence is there that Peter was a bishop in Rome?
4
Is a Catholic dogma that Moses (as the Exodus prophet) actually existed?
6
Is there any evidence to support the claim that the Apostle St. Peter founded the Church in Antioch and, if so, what are the implications?
1
What is the view of Reformed Protestantism on those who were 'numbered with' the apostles but did not, as did Paul, receive Peter's approbation?
1
What are the arguments for the Holy Magisterium?