Can anyone explain the origin — i.e., when it was first used, the Pope who wore it the first time and when, its name — of that red hat worn by Pope Ratzinger? 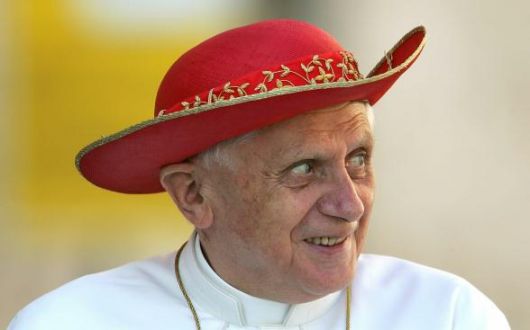 Pope Emeritus Benedict XVI (formerly known as Joseph Cardinal Ratzinger) is depicted above wearing what is known as a "cappello romano," which is Italian for "Roman hat."

It does not originate from papal attire, but was simply a fashionable hat worn by 17th century clergy.

A cappello romano (literally Roman hat in Italian) or saturno (because its appearance is reminiscent of the ringed planet Saturn) is a hat with a wide, circular brim and a rounded crown worn outdoors in some countries by Catholic clergy, when dressed in a cassock. It is made of either beaver fur or felt, and lined in white silk. Unlike many other articles of ecclesiastical attire, it serves no ceremonial purpose, being primarily a practical item. The cappello romano is not used in liturgical services. Since the general abandonment of the cassock as street dress, it is uncommon even in Rome today, though it was quite popular there and in some other countries with a Catholic majority population from the 17th century until around 1970.

There are some, mostly minor, differences in the designs of cappelli, depending on the rank of the wearer. The pope wears a red cappello with gold cords. Cardinals formerly also had the privilege of wearing a red cappello, but this rule was overturned by Paul VI, and now Cardinals' cappelli are black, as are those of all other clerics. 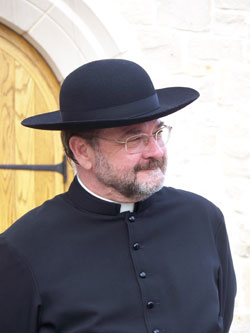 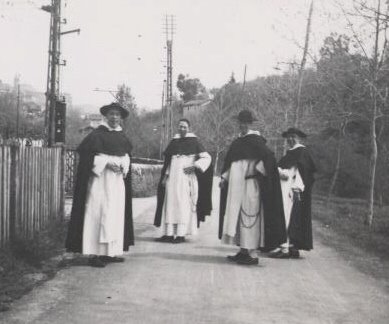 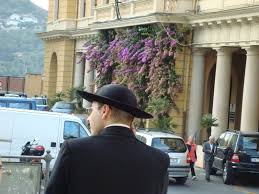 8
How does Pope Benedict XVI reconcile conscience and authority?
5
What personal possessions did Pope John Paul II have at the time of death?
1
When and for what reasons does the Pope have the right to legitimately excommunicate members of the Church?
4
Can a pope name his successor?
2
What is Ultramontanism & Neo-ultramontanism?
8
What is the fewest number of cardinal electors are needed to validly elect a pope?
7
When was the formal title of Pope first officially bestowed on the Bishops of Rome?
5
What is the proper title for someone who was a pope and is now canonized as a saint?