These days we can see many churches using latest musical instruments to worship God in the church, example - Assembly of God.

Once I attended a Catholic church. Some sisters were sitting at the front and singing songs from a hymn book. There was no music, no musical instruments. I wonder if this is how they worship always.

Does the Catholic Church allow latest musical instruments(guitars, drum set, piano etc.) to be played while worshiping in the church?

15. Although the music proper to the Church is purely vocal music, music with the accompaniment of the organ is also permitted. In some special cases, within due limits and with proper safeguards, other instruments may be allowed, but never without the special permission of the Ordinary, according to prescriptions of the Caeremoniale Episcoporum.

19. The employment of the piano is forbidden in church, as is also that of noisy or frivolous instruments such as drums, cymbals, bells and the like.

20. It is strictly forbidden to have bands play in church, and only in special cases with the consent of the Ordinary will it be permissible to admit wind instruments, limited in number, judiciously used, and proportioned to the size of the place provided the composition and accompaniment be written in grave and suitable style, and conform in all respects to that proper to the organ.

This formed the basis for De musica sacra et sacra liturgia issued by the Sacred Congregation of Rites in 1958:

68. Other instruments besides the organ, especially the smaller bowed instruments, may be used during the liturgical functions, particularly on days of greater solemnity. These may be used together with the organ or without it, for instrumental numbers of for accompanying the singing. However, the following rules ... are to strictly observed:

a) the instruments are truly suitable for sacred use;

b) they are to be played with such seriousness, and religious devotion that every suggestion of raucous secular music is avoided, and the devotion of the faithful is fostered;

c) the director, organist, and other instrumentalists should be well trained in instrumental techniques, and the laws of sacred music.

70. Musical instruments which by common acception, and use are suitable only for secular music must be entirely excluded from all liturgical functions, and private devotions.

The use of bands and particularly drums may suggest "raucous secular music", so they are to be avoided.

Musicam Sacram was promulgated by the Second Vatican Council in 1967.

63. In permitting and using musical instruments, the culture and traditions of individual peoples must be taken into account. However, those instruments which are, by common opinion and use, suitable for secular music only, are to be altogether prohibited from every liturgical celebration and from popular devotions.[De music sacra etc n.70 [above]]

This Vatican II Constitution allows a little more leeway by permitting appeal to local culture and tradition and whether a particular instrument is suitable only for secular music. This decision would be made by the local bishop or Bishops' Conference. However, the earlier documents indicate the direction that decision should go.

Despite the 1903 rules, the use of the piano and acoustic guitar is not uncommon in the UK.

We recently hired a new music director who has fired up this debate in our parish. As a result I did some research:

Musicam Sacram section VI, 63 states that any instruments can be approved if

I read this to mean the local bishop has final say in each region, in the absence of direct orders from the Vatican. This allows the mass to best serve each locale, even under a larger global umbrella of authority.

I can't speak for countries out side of the U. S., but here in the States any type of musical instrument is permitted as long as:

A. They are approved by the right authority.

B. They are played in a manner that is edifying.

"The use of other instruments may also be admitted in divine worship, given the decision and consent of the competent territorial authority, provided that the instruments are suitable for sacred use, or can be adapted to it, that they are in keeping with the dignity of the temple, and truly contribute to the edification of the faithful."

About 80% of these Masses included (but is not limited to) the following instruments for the various elements of the Mass (responsorial Psalms, etc.): 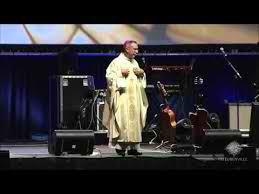 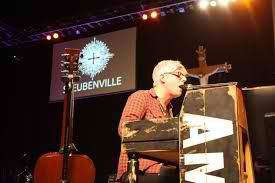 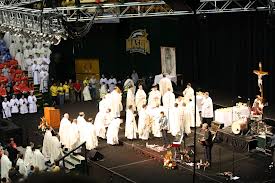 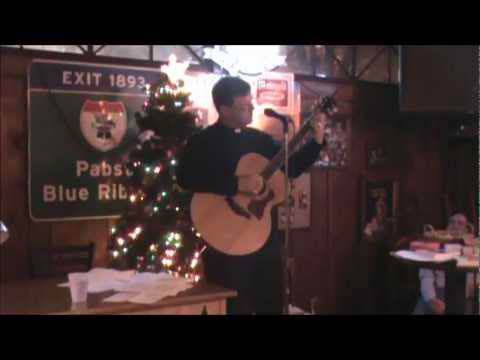 I have participated in a youth retreat held every year throughout the U. S. that incorparates very intense praise and worship music in order to appeal to teenagers.

The dramatic change of liturgical music in the U. S. is one of the major topics of debate.

//Does the Catholic Church allow latest musical instruments(guitars, drum set, piano etc.) to be played while worshiping in the church?//

No. Modern musical instruments are not allowed unless permitted by the local bishop. Guitars and Drums are explicitly forbidden for Liturgical use. I am not a musical student so I don't know the difference between a Organ, Keyboard and a Piano. But an Organ is the standard liturgical instrument. (Any instrument that can replicate organ's sound in a similar way will be permitted)

Liturgical services are not parties, but are celebrations of the Church. Center of the liturgy is Christ but these instruments put the player in the center. And that is the main reason why these instruments are banned.

//Once I attended a Catholic church. ... There was no music, no musical instruments. I wonder if this is how they worship always.//

No it is not without music always. Music is an integral part of liturgy. And musical instruments have aided in the liturgy for ages. The problem is with the modern music and instruments. For instance solemnities like Easter and Christmas people are strongly advised/urged to celebrate mass with proper music and choir. They both exercises its own liturgical function among the faithful by law.

Organ is the most common instrument in Catholic churches (almost all, even the smaller ones, got one): in general, it's the only instrument allowed BUT... the local bishop could allow other instruments.

Generally, classic guitars are allowed. My Bishop allows basses, bongos and flutes too (but every one knows that he doesn't really like bongos, so no one use them). My bishop also listed songs that are allowed during celebrations-

I joined this group specially to answer this question.

I am not a Catholic (or a deist of any kind) but as a musician in a local brass band I often play in church, for all kinds of services. This is in South Germany, a very Catholic area.

We play all usual brass band instruments, and for modern pieces we will even add a drum set (though the first time we did that that it did set the grandmas whispering).

No-one has ever complained, and it must be approved, because we have a special book of hymns set for brass band, issued by the diocese.

Not the answer you're looking for? Browse other questions tagged catholicism music or ask your own question.

24
What's up with churches and guitars in this joke from The Big Bang Theory?
5
When did guitar led worship music become accepted?
7
In RC doctrine, when is pop culture, like Bernstein's Mass, appropriate to tell sacred messages?
3
Contemporary Catholic views on music in the Church: is music for God or for the people?

19
What is the biblical basis for the prohibition of instruments in worship?
12
Format for the Catholic Mass
1
Were musical instruments alowed in the temple holy and holy of holys?
6
Was Arianism spread using musical jingles?
1
Early 90s Jungle themed christian childrens Musical
3
Contemporary Catholic views on music in the Church: is music for God or for the people?
10
Is there a good alternative word to “performance” to describe an evangelical worship team's actions?
5
Who first compared the Trinity to a musical triad?