What is the origin of praying hands folded?

I was taught in Sunday school to pray hands folded. On the other hand, there's no biblical mention of the practice (as far as I know). It actually doesn't seem to matter which position we pray in.

How did folding hands come to be a common practice? Is there some reasoning behind it? 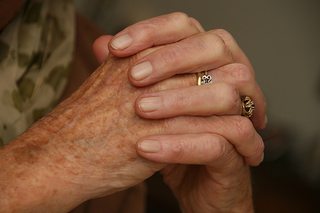 Very interesting question. I did some browsing and came up with the following information.

First of all, this link has some content on the topic:

Here is one quote from that thread, but I recommend reading it and judging the content for yourself:

The Talmud relates how the Babylonian Sage, Rabba (Abba ben Joseph, C. 280-352), used to pray with his hands folded.

And for the meaning of it, I came across the following web page:

It mentions the following information (pasted in fragments):

Such a prayer gesture is a symbol of obedience, submission, sincerity and repentance.

Nathan Ausubel, in his book "Book of Jewish Knowledge said that this prayer gesture is not exclusive to Christians alone. He said the Jews even before the time of Jesus Christ, practiced it: "It has also been commonly assumed that folding the hands in prayer is exclusively a Christian custom. This is not the historical fact at all. As early as the post-Exilic period, when Jews prayed, they folded their hands, and they observed this custom for several centuries even after it had been adopted by Christians."

Jesus, being a Jew, also prayed with clasped hands. You must have seen pictures or images of Him in the garden of Gethsemani in this prayer gesture. In other art works, you can also see the Virgin Mary and angels with their hands clasped as well.

And another viewpoint here:

The joining of hands "leads back to men's early desire to subjugate each other and developed out of the shackling of hands of prisoners!

"Though the handcuffs eventually disappeared, the joining of hands remained as a symbol of man's servitude and submission and his inability (or even lack of inclination) to grasp a weapon."

Another reference (and a selective quote from it):

"Religious historians trace the gesture back to the act of shackling a prisoner’s hands with vine or rope: joined hands came to symbolize submission. In ancient Rome, a captured soldier could avoid immediate death by joining the hands together. Just as waving a white flag today, the message was clear. “I surrender.” Centuries later, subjects demonstrated their loyalty and paid homage to their rulers by joining their hands. In time, clasping the hands together communicated both an acknowledgement of another’s authority and one’s own submission to that authority."

It originated around the 11th or 12th century, when peasants would beg for work from the feudal lord. This was a gesture of utmost humility & pleading. You can read about it Edward Schillebeeckx's book "The Church with a Human Face." It is very briefly mentioned, but it's in there. (also, i'm sure it helps kids to not get distracted so easily) :)

Though this is speculative response to the question of why hands are place facing each other in prayer, it is not a form of begging or humility, but instead represents the joining of "who we were born to become (true nature) - represented in the left hand" and "who we are actually becoming (fulfilled spirit of experiences) - represented by the right hand".

By praying with our hands placed against each other - the symbolism of this act is a reminder that when communicating with God, we are requesting that (as Jesus Christ fulfilled his purpose on Earth) we are also guided to fulfill our true purpose on Earth, to ensure that when our spirit leaves our physical body, that we bring "home" the experiences and learnedness that was expected of us during our time on Earth.

In the Lord's Prayer, this is also represented by the phrase "thy will be done, on Earth as it is in Heaven". In Heaven (or our original home) we were missioned to fulfill a specific purpose on Earth (as was expected of Jesus Christ) - so the prayer states (rephrased slightly) let me be on Earth as it was planned for me in Heaven.

So - the praying hands are the reminder that we are to live every day on Earth (right hand) as our purpose was planned in Heaven (left hand).

The bible doesn't mention anything on hands clasped. We can pray kneeling or standing while our hands are raised and spread toward heaven as the scriptures say:

1 Kings 8:22 And Solomon stood before the altar of the LORD in the presence of all the congregation of Israel, and spread forth his hands toward heaven

There are other scriptures that explain the same. All this other non sense of where it came from should be null and void if it is not in the scriptures. Hands clasped is a tradition of men not of GOD.

Not the answer you're looking for? Browse other questions tagged church-history prayer tradition or ask your own question.

4
Why do folks clasp their hands and bow their heads when praying?
16
Can we pray from any position?
6
Why do LDS cross their arms during prayer?

15
What is the Biblical or traditional precedent or command regarding praying before meals?
21
What is the origin of holding hands when praying around a circle before a meal?
1
Do any Christian groups regularly practice the “lifting up of holy hands” during prayer?
9
When, how, and why did the Moravians stop praying 24-7?
12
Origin of the story that James had knees as hard as a camel's, because of praying
5
What is the origin of hands lifting in worship?