Were the medieval popes examined on a toilet-lid-like chair to establish their masculinity? 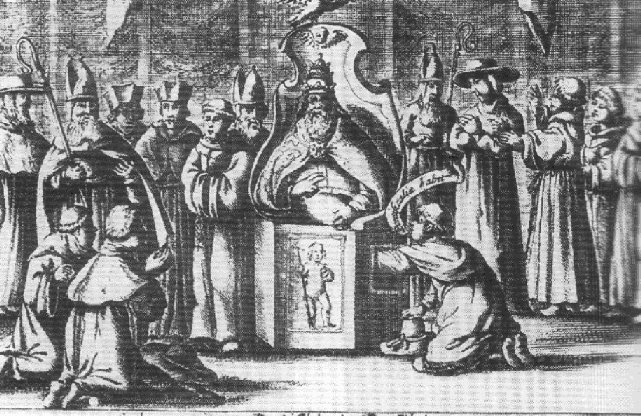 Is one of the consequences of the Pope Joan story, whether it was true or false, the use of a marble chair with a large, toilet-like hole in its seat?

As the picture above shows, it seems that that chair has been a part of the papal enthronement, when the pope-elect had to sit on the seat naked from the waist down while cardinals filed past, either peering or feeling to confirm his masculinity.

According to this Wikipedia article (which is in Dutch; there is no English version), the cardinals said 'Testiculos habet et bene pendentes' in confirmation of the pope having passed the inspection.

What is the truth of such a papal testing?

The chair was real, but its actual function is different from what the legend says. And actually, it seems to have been three chairs: one "commode"-type seat, and two porphyry "pierced" chairs. Read on for more.

In Misconceptions About the Middle Ages (page 66-7; ed. Harris and Grigsby), a description is given of the chairs' function in papal coronations:

The alleged manual examination of the papal claimant's genitalia, performed by a junior deacon through a [sic] opening in the papal chair, aimed, of course, to guard against the election of another woman Pope. ... By 1406, the humanist Jacopo d'Angelo ... denies in his report of the coronation of Gregory XII that such a rite existed, and accounts for the false belief along largely correct lines by explaining the meaning of function of various chairs in the coronation ritual: one chair at the Lateran, called the sedes stercoraria [which means "dung chair" or "toilet"], on which the Pope sits to remind him "that he rises out of clay and dung," that is, that he is subject to the failings of our human nature; and two porphyry seats in the Chapel of San Sylvester (which, because they are pierced, Jacopo says, "the common people tell the senseless fable that someone touches him as he sits to prove that he is indeed a man"). Seated in the latter, the Pope receives, respectively, the papal staff and keys (i.e., the power to govern, granted by Christ to Peter) and a red belt hung with twelve precious stones (invoking the Old Testament priesthood). The two porphyry chairs had first been noted in the investiture of Paschal II in 1099, as found in the Liber Pontificalis. ... The "stercory chair" was eliminated from the rite of investiture in 1560, while the two pierced chairs were last used in the accession of Leo IX [sic; that should be Leo X] in 1513. One was taken from the Vatican by Napoleon after the Treaty of Tolentino and is now in the Louvre; the other is still in the Vatican Museum.

The writing of Jacopo d'Angelo to which they refer is a letter to a certain Emmanuel Chrysoloras, which doesn't seem to be available in English. The editors claim indebtedness to The Myth of Pope Joan by Alain Boureau, so if you want to know more then that's probably a good place to look.

The renowned 19th century historian of Rome, Ferdinand Gregorovius, described the sedia stercoraria in further detail in History of the City of Rome in the Middle Ages, Volume 5, Issue 1:

Advancing across the forums and through the triumphal arches of Septimius Severus and Titus the procession skirted the Colosseum passed by S. Clemente and reached the piazza of the Lateran. Here the clergy of the Lateran received the pope with solemn song. They escorted him to the Portico where he took his seat on an ancient marble chair, the sella stercoraria. This symbolic ceremony of the deepest abasement of the supreme Head of Christendom on a seat bearing such a name is perhaps the most curious custom of the Middle Ages, a custom which we can only now contemplate with a smile. Cardinals however hastened to raise the Holy Father from the inappropriate seat with the comforting words of Scripture, "He taketh up the simple out of the dust and lifteth the poor out of the mire." [Psalm 113:7] The pope standing erect took three handfuls of gold, silver, and copper from the lap of one of his chamberlains and threw them among the people saying "Gold and silver are not mine but what I have that I give thee." [Acts 3:6]

In conclusion, though reports of the testicle verification rite go back a long way, so do contrary reports. The contrary reports make more sense (to me at least) and the reports of the testicular examination come chiefly from opponents of the Papacy and give confused accounts of what actually took place. My verdict, personally, is that it never took place but that someone saw the chairs with the holes and let their imagination do the rest.

On a historical note, as with Pope Joan story, this too never happened. These the two myths became connected in a well circulated rumor which what eye-witnesses to medieval papal coronations believed they were watching. The result was the often repeated report of a public rite always seen by others, never by the narrator.

If Pope Joan story is not true, then this ritual(?) will not be necessary at all. Because at any point no one would have doubted the masculinity of a Cardinal. But even if Pope Joan story is true, there are other better ways to make sure that the pope-elect is a man like pulling his beard etc., Even if it was done, there is no necessity to do it in public. Just like the conclave, it could have been done in private, which would make it impossible to be known to the outside world.

Also note that the Wikipedia article that you have cited has no reliable reference. The oldest surviving version of the story is from the mid-13th century, believed to be propagated by the followers of a cult of Saint Guglielma. Interestingly these followers had their own "pope" too. It is said that they were spreading these rumors to invalidate the catholic papacy.

Not the answer you're looking for? Browse other questions tagged catholicism church-history papacy medieval-church .

13
What is the nature of the theory for Pope Joan and the evidence that substantiates it?
2
Does the Catholic Church verify whether candidates to the priesthood are really men?

6
Were the Waldensians like a Protestant Church in the Middle Ages?
16
What passages of Scripture were used by the popes and crusaders to justify the Crusades?
4
Why was heliocentrism such a threat to Roman Catholic leaders that their proponents were threatened to be burnt at the stake?
2
Famous theologians or saints who held that there were no valid Popes during the Great Western Schism?