What's the origin of the Catholic object that is a staff with a crucifix on top?

Like I asked in the title, what's the name and origin of a staff with a crucifix on top? Like the one depicted in the picture. 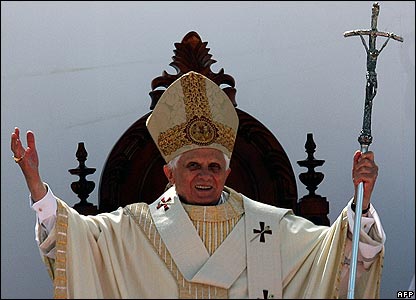 That, in fact is the Papal Cross or Ferula.

It has been used since Pope Paul VI, designed by the Italian artist Lello Scorzelli. It is used in the same manner as a crozier. However, the cross bar is bent much like the paterissa.

Those are crosiers, which have their origin in a shepherd's crook and are a symbol of a bishop being a "shepherd of men." Many have become more ornate than just a simple shepherd's crook and have crosses or other stuff on them; check out the pictures on the wikipedia article on crosier. Here, you can buy one yourself and smite some heathen. The one in the picture is specifically the Papal Cross, which is, like, the Pope's one of those.

[Edit] Actually, unless you really are rubbing shoulders with bishops a lot, it came to me as I lay in bed last night that you might mean the "cross on a staff" that Catholics and other high church denominations commonly use in church services. This is a "processional cross" and are available from church supply stores everywhere. They were used very early in the church's history to head up processions, it being the equivalent of a flag or banner (which similarly, you put on a big stick for visibility and because it's a pain to carry a big ol' cross or flag in your paws for long). Here's the Catholic Encyclopedia article on them. Today, they are regularly used to precede the priests and Bible down the aisle to the altar to kick off a church service, and similarly out during the recessional. Episcopalians use them, Lutherans might too I believe. I'm not Catholic but stick to the high church end of the spectrum and see them a lot.

The origins of Roman Pontiffs carrying a Papal ferula or Papal Cross (Crucifix) during certain ceremonies may in fact go back to a particular popular belief involving the Prince of the Apostles himself.

According to legend St Peter gave his pastoral staff to St. Eucharius in order to raise the subdeacon Maternus from the dead!

According to an ancient legend, he was one of the seventy-two disciples of Christ, and was sent to Gaul by St. Peter as bishop, together with the deacon Valerius and the subdeacon Maternus, to preach the Gospel. They came to the Rhine and to Elegia (Ehl) in Alsace, where Maternus died. His two companions hastened back to St. Peter and begged him to restore the dead man to life. St. Peter gave his pastoral staff to Eucharius, and, upon being touched with it, Maternus, who had been in his grave for forty days, returned to life. The Gentiles were then converted in large numbers. After founding many churches the three companions went to Trier where the work of evangelization progressed so rapidly that Eucharius chose that city for his episcopal residence.

In the Middle Ages it was believed that the pope used no crozier, because St. Peter had sent his episcopal staff to St. Eucharius; Innocent III concurs in this opinion (De Sacrif. Missæ, I, 62). The same instance, however, is related of several other alleged disciples of St. Peter, and more recent criticism interprets the staff as the distinctive mark of an envoy, especially of a missionary. - New Advent

Where is the staff of St Peter?

The staff of St. Peter, with which he had been raised to life, was preserved at Cologne till the end of the tenth century when the upper half was presented to Trier and was afterwards taken to Prague by Emperor Charles IV. Wikipedia

This in part is the reason why Popes in modern times choose to carry a papal ferula instead of a bishop's crozier.

Not the answer you're looking for? Browse other questions tagged catholicism tradition origin or ask your own question.