Which translation of Augustine's Confessions is the easiest to read in English?

Not all translations are created equal, and often the public domain ones freely available online are some of the worst.

Augustine fans out there – whose translation of Confessions is the best in English? I'm looking for readability (out-loud or otherwise) here, not necessarily technical accuracy.

Here are the English translations that I'm aware of (I doubt this is a complete list):

Here are four excerpts from different translations, all from the first few sentences of Book I, Chapter 3:

So then, if you fill heaven and earth, does that mean that heaven and earth contain you? Or, since clearly they cannot hold you, is there something of you left over when you have filled them? Once heaven and earth are full, where would that remaining part of you overflow? Or perhaps you have no need to be contained by anything, but rather contain everything yourself, because whatever you fill you contain, even as you fill it?

My initial impression is that Boulding sounds the most contemporary and in many regards is "easier to read," but perhaps it is weak in other areas. Sheed seems to be a very close second (and superior in other regards). The book reviews on Amazon rarely address the translation, so I'm asking here.

If I were, for some strange reason, compelled against my will to read Confessions aloud before a crowd, I would choose F. J. Sheed’s translation.

In my mind, Sheed not only sufficiently translates the originals into English, but also does the best job with the electrifying high poetry of Augustine's writing.

For example, compare Sheed’s translation of Book I, Chapter III with the examples in the body of your question:

But if you fill heaven and earth, do they contain you? Or do you fill them, and yet have much over since they cannot contain you? Is there some other place into which that overplus of You pours that heaven and earth cannot hold? Surely You have no need of any place to contain You since You contain all things, and fill them indeed precisely by containing them.

Notice that, unlike the other more technical translations, the last sentence in the above excerpt is molded into an imperative sentence rather than an interrogative. This appears to be a subtly significant attempt to convey both the theological, as well as the emotional dynamism that St. Augustine is canonically known for. This also breaks up the monotony of questions by giving some intelligible credit to a philosophical giant such as Augustine.

When reading Sheed’s translation of Confessions (as well as his other works) I often catch myself reading the passages with a sort of rhythm, almost like I’m reading one of C. S. Lewis’ works of poetry. It combines just the right amount of the post-Elizabethan, King James-ish English with a more modern Chesterton-like prose, both of which I am truly fond of.

Here I have loosely rearranged a passage of Sheed’s translation in order to illuminate the rhythmic structures of sentences that help me to stay zeroed in on what Augustine is actually saying:

And if You are already in me,

Since otherwise I should not be,

Why do I cry to You,

To enter into me?

Even if I were in Hell You would be there,

For if I go down into Hell, Thou art there also.

Thus, oh God, I should be nothing,

Unless you were in me,

Or rather unless I were in you,

Of whom and by whom and in whom,

Sheed’s translation is thoroughly saturated with a kind of seamlessness, that of which other translations I have read (or have attempted to read) seem to lack. As in all of his theological works, (which I very highly recommend every single one of them) Sheed does an incredible job of efficiently manipulating the English language into transporting eternally understandable truths to simple minds like mine.

Give Sheed a chance…you won’t regret it.

This question has long been of interest to me, and I've investigated it on a number of occasions in the past -- never quite in a "scientific" way, though. This looks to be a fruitful question, even if it is one of those "opinion based" (but hopefully "good subjective") ones that are not ideal for a Q&A in the StackExchange model.

My own test passage of interest is the one where Augustine first encounters the Scriptures, in Bk. III, ch. 5(9). I've compared the translations listed here (perhaps not a comprehensive list, but close, I think) -- the letters correspond to the spreadsheet, below. I've appended some purely personal impressions of the "readability" of the translation; lower down there are some remarks on this passage itself.

UPDATE (13.10.2017) A new translation of the Confessions has appeared since this "answer" was posted, that by Sarah Ruden. See the end of this answer for her rendering of the test passage.

Here are the texts for comparison. They are arranged chronologically from left to right; it's clear to see how the translations tended to grow in verbosity from Pusey's fairly terse start, not much longer than the Latin itself:

But this version makes it easier to do detailed comparisons (the text in blue is where the translator has transposed the sequence of phrases in English by comparison with the Latin in Column A): 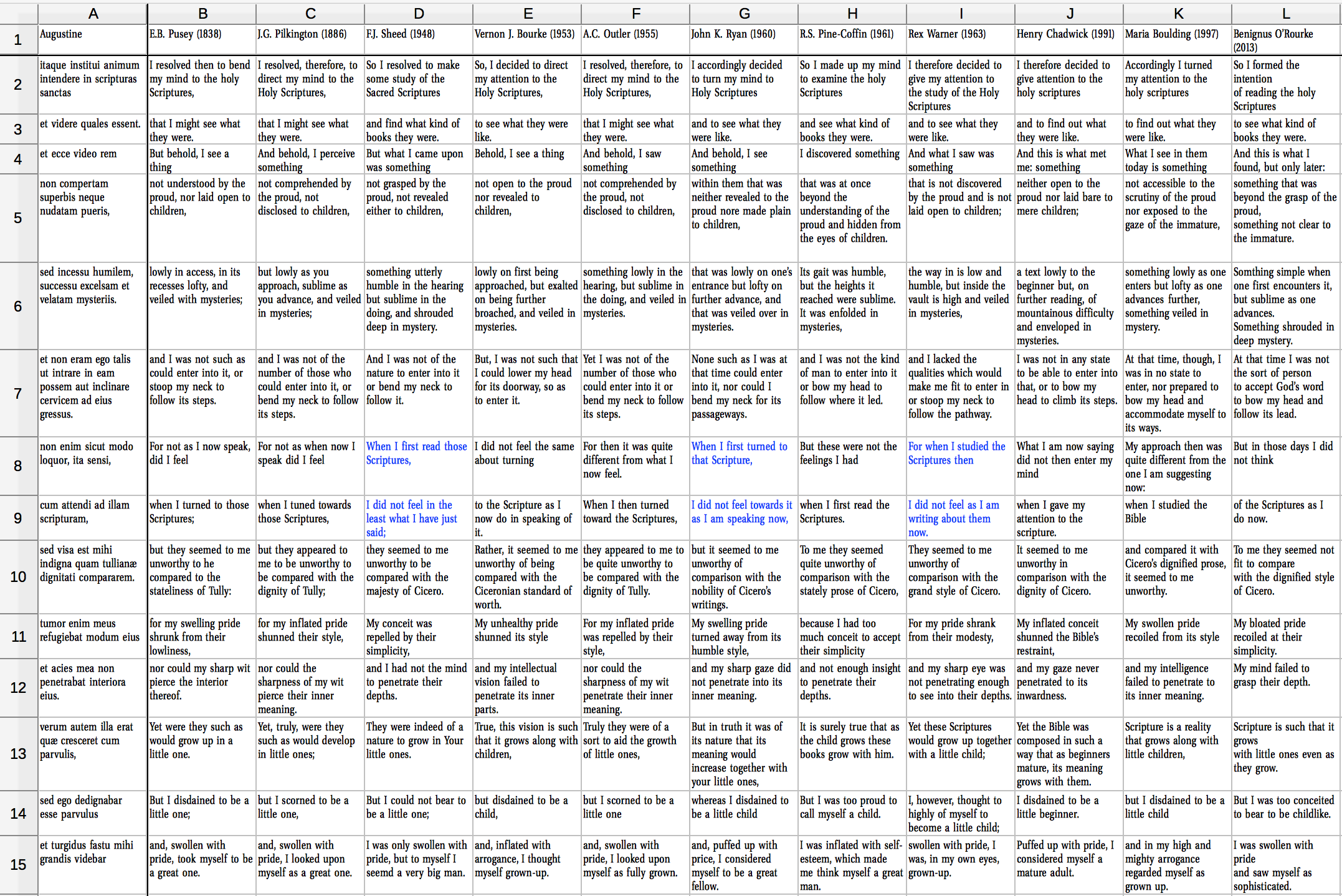 Beyond the impressionist sketches above, there are a few points in this brief extract which bring out the differences in our translators most sharply. (I refer to the numbered "rows" from the graphic immediately above.) (What follows here is selective, not exhaustive!)

And, more briefly, a couple that come toward the end of this text:

As promised, here is Benignus O'Rourke's rendering as it appears on p. 93 of his edition. It does make for a very readable version: all the more pity he decided to omit books X-XIII, then.

DISAPPOINTED BY THE SCRIPTURES

So I formed the intention
of reading the holy Scriptures
to see what kind of books they were.
And this is what I found, but only later:
something that was beyond the grasp
of the proud,
something not clear to the immature.
Something simple when one ﬁrst encounters it,
but sublime as one advances.
Something shrouded in deep mystery.

At that time I was not the sort of person
to accept God’s word
to bow my head and follow its lead.
But in those days I did not think of the Scriptures
as I do now.
To me they seemed not ﬁt to compare
with the digniﬁed style of Cicero.
My bloated pride recoiled at their simplicity.
My mind failed to grasp their depth.

Scripture is such that it grows
with little ones even as they grow.
But I was too conceited to bear to be childlike.
I was swollen with pride
and saw myself as sophisticated.

Miles Hollingworth -- one of Augustine's many biographers -- reviewed it in Journal of Theological Studies, and this extract summarizes his judgment:

My impression is that by having aimed for a translation of plain readability that, as he hopes, a 16-year-old might enjoy, O’Rourke has also tapped deep into what made the original Confessions so winsome in their time. I found that I was deeply moved by his faithfulness to Augustine’s words. ... Scholars have long realized that each of Augustine’s words can take us far into the fascinating hinterlands of history and philology attached to them. But O’Rourke has chosen instead to look forwards, as Augustine the author did, when he sighted the audience whose souls he thought this book might save.

Several English translations of the Confessions are available. The nineteenth-century Pusey translation remains a careful and vigorous text; yet its language is heavily archaic to the late twentieth-century ear. Two midcentury series of translated sources have included the Confessions in English: Vernon Bourke, noted Augustinian scholar, has offered a 1953 translation in the extensive Fathers of the Church series; Albert Outler, more recently a welcome authority on John Wesley, produced a 1955 translation in the Library of Christian Classics, vol. 7. The Bourke translation is a clear, literal rendering. The Outler includes helpful footnotes from time to time on major points of Augustinian thought. R. S. Pine-Cofﬁn offers a paraphrase-translation in Penguin Books, valuable for rapid, initial reading. Comparable to Pine-Coffin is the Rex Warner translation of 1963 (Mentor Books); yet Pine-Cofﬁn is superior in introduction and notes, and in the adept use of English, especially the striking phrase. J. K. Ryan’s translation for Image Books (1960) is a careful, close reading, yet contemporary in expression, with valuable notes, references, and introduction. Henry Chadwick has provided a new translation (1991) through Oxford University Press with especially helpful, knowledgeable footnotes, introduction, and index.

I note a recent undergraduate course on the Confessions at the Catholic University of America assigned the Chadwick translation as its set text (that syllabus has some useful further reading that would be of interest to anyone still reading this post).

If anyone is interested in the LibreOffice Calc spreadsheet with this data, you can view or download it from Google Drive. The sheet with the text broken into phrases/clauses uses Venturis ADF Condensed, available for free download (or see the whole family). (N.b. typos in the PNGs above have been fixed in the ODS file; I will update it with any further corrections, should that be necessary.)

Therefore I undertook to consider the sacred texts and get a sense of them. And lo and behold the subject matter wasn’t “factual” in pretentious people’s opinion, or laid straightforwardly bare for children’s eyes, either, but lowly when I stepped toward her, of lofty dignity when I came up close, and veiled in mysteries. But back then, I wasn’t the sort of person who could enter into her, or bend my neck submissively to follow her own strides. The tone I take now, you see, doesn’t show the way I felt when first turning to these writings, which seemed not even worthy comparing to the excellence of Cicero. My swollen-headed opinion of my own taste recoiled from their mediocre manner, and my critical eye couldn’t pierce into the qualities behind that. In actual fact, this writing is just the sort to grow up alongside small children, but I wasn’t going to stoop to being a small child; I was bloated with conceit and seemed to myself, anyway—quite grown up.

Now included in this answer for the sake of completeness.