Why does a beheaded saint have the halo above the stump?

Many Christian martyrs have been beheaded, and they are often shown in art carrying their own severed heads. Sometimes, the halo appears not around the head, but where the head should be, as in the following French examples: 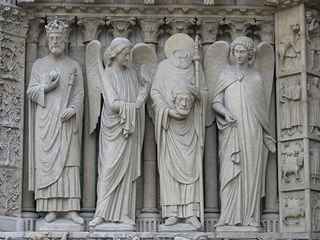 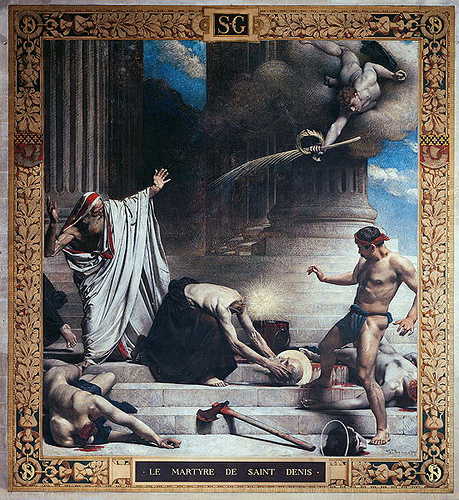 Martyrdom of St Denis, in the Pantheon (Paris), by Léon Bonnat. Here, there are two halos in different styles! 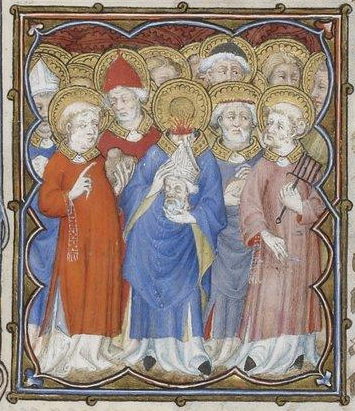 A beheaded bishop and martyr (possibly St Denis again) in the Petites Heures of Jean de Berry; flanked by St Stephen with his stone and St Lawrence with his griddle (Bibliothèque nationale de France, Département des Manuscrits, Latin 18014, f. 105r). I don't know who the saint is behind them, with the top of his head removed and carrying his own brain - St James the Less, maybe?

What is the rationale behind showing the halo above the stump, instead of around the head? I am looking for answers that can speak to the symbolic purpose of the halo, and of the common practice of showing saints carrying their own body parts - not an answer based solely on aesthetics.

According to Wikipedia, the halo was initially used for Jesus as a symbol of His Glory. Applied to the saints, it could be the outpouring of God's Glory, often talked about in the Bible, where the living water would flow from you, or His Light shine from you. If the position of the halo is usually from the Head of the body then I would make the assumption that the glory does not come from the physical body/head but from the soul/spiritual body/head.

Why does a beheaded St. Denis have the halo above the stump? 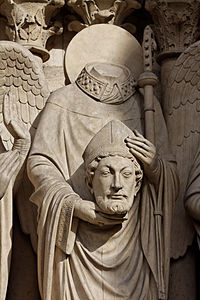 Before going on into my answer, I would like to point out the obvious: We are dealing with Catholic art and imagery as seen through the eyes of the artist.

The wounds of the glorified Martyrs will shine in heaven for all to see, yet amputated limbs will also be restored. Yet at the same time we shall see on the bodies of the Martyrs the traces of the wounds which they bore for Christ’s name. Thus the artist is trying to convey a mystery to us for our contemplation.

St. Denis died a martyr by decollation. Yet in heaven his head would be restored to it's natural place on his body. In art, the head of St. Denis is carried in his hands to show the manner of his martyrdom and at the same time he has a halo where his head should normally be. In heaven St. Denis will have his head upon his shoulders, yet at the same time his scars where his head was severed from his body will be marks of glory in the kingdom of heaven.

It was fitting for Christ’s soul at His Resurrection to resume the body with its scars. In the first place, for Christ’s own glory. For Bede says on Luke 24:40 that He kept His scars not from inability to heal them, “but to wear them as an everlasting trophy of His victory.” Hence Augustine says (De Civ. Dei xxii): “Perhaps in that kingdom we shall see on the bodies of the Martyrs the traces of the wounds which they bore for Christ’s name: because it will not be a deformity, but a dignity in them; and a certain kind of beauty will shine in them, in the body, though not of the body.” - Why Jesus’ Resurrected Body Still Had Wounds

Let us not forget that St. Thomas the saints in heaven will all have halos. But some will have special halos.

The essential reward of heaven is called theaurea, that is, the golden crown. All the blessed have this aurea. Now, it seems that some saints-by reason of the special type of victory they won in saving their souls: by martyrdom, by virginity, by notable teaching of the truths of faith-have a special crown or aureola in addition to the aurea. Aureola means a little golden crown; sometimes it is called nimbus or halo. Christian art often depicts any saint, and even our Lord, with the nimbus or halo. But the precise meaning of aureola is not something general and to be attributed to all the blessed, but something special, bestowed in recognition of a particular excellence, on certain saints. - Special Heavenly Rewards

A cephalophore (from the Greek for "head-carrier") is a saint who is generally depicted carrying his or her own head. In Christian art, this was usually meant to signify that the subject in question had been martyred by beheading. Handling the halo in this circumstance offers a unique challenge for the artist; some put the halo where the head used to be, others have the saint carrying the halo along with the head, and some split the difference. Associated legends often tell of the saint standing and carrying his own head after the beheading. - Cephalophore (Wikipedia)

The Miracle of Saint Justus by Peter Paul Rubens

I would like to mention one last thing about St. Denis. According to legend (very popular in France), he carried his heads in his hands for some distance before collapsing.

St Denis began to convert and baptize the pagan inhabitants of Paris. The pagan priests were troubled, no doubt, by his success. They had him decapitated on the high hill of Paris, Montmartre, a hill sacred to Mars. The present name Mont Martre seems to refer to the Mount of the Martyr but may have been originally dedicated to the pagan god Mars – Mons Martis.

After decapitation, he walked around with his preaching head. After walking about six miles, he fell down dead. On the site of his collapse was built a shrine in his honor. At the insistance of Saint Genevieve of Paris, the shrine was expanded into a basilica. It was the traditional burial place of Catholic kings of France. - Saint Denis: The Head-Carrying Bishop of Paris

10
Where did the religious symbol of the 'halo' come from?
9
What exactly is the purpose of a Patron Saint?
9
What does spikenard have to do with St Joseph?
11
Why is Origen considered a Church Father, but not a saint?
1
Why does Joseph have a staff in nativity scenes?
5
Which church traditions regard Constantine the Great as a Saint?
2
Why aren't Moses, Elijah, and other Old Testament heroes of faith given the title of "Saint"?
6
What is the meaning of the stained glass above the altar at Votivkirche in Wien with the Portuguese Quinas on it?
0
Does the Russian Orthodox Church recognize Adolf Hitler as a Saint?