What was the main reason for excluding 35 latest names from the list of recognized saints by ROC?

What was the main reason for excluding 35 latest names from the list of recognized saints by the Synodal Commission of Russian Orthodox Church on Canonization?

EDIT: The author of the video claims that the reason was that some KGB archives have been made available to the public, and a lot of bad, yet true stories are revealed about those priests who have been canonized. As the author says, some of them, if not all, were cooperating with KGB and reported. ROC excluded them suddenly, with no explanations

I think it is important to understand here that the Orthodox custom of canonization is radically different from the Roman Catholic process. Within the Orthodox Church, veneration of saints occurs spontaneously among the faithful. There is no multi-step process or requirement for a certain number of miracles to have been performed. "Canonization" by an Orthodox Patriarchate is a process of recognizing persons as saints whom local believers are already venerating. Thus, the removal of a saint from a calendar does not necessarily equate to the Patriarchate denying that person is a saint.

The "removal" of the names seems to have been due to a general decision taken by the Council of Bishops of the Moscow Patriarchate on how the memories of 20th century martyrs were to be maintained, and not due to any general conspiracy by the Russian Orthodox Church.

The Church urges government and public figures to support its efforts to explore and perpetuate the memory of the victims of persecution. In particular, it appeals to the heads of institutions and those in charge of archival documents to promote the early identification and complete information about the victims in the persecution. To this end, it is important to improve the methodology of scientific study and investigation of cases. It is necessary to continue the dialogue with the government about the possibility of legislative or administrative means of ensuring access of authorized representatives of the Church to the relevant archives, subject to compliance with legal requirements of non-disclosure of information about the private lives of citizens.

In all Orthodox Churches, a liturgical calendar is made available in all parishes at the beginning of the civil year. These calendars include, for each day, the Epistle and Gospel readings for the day (which follow an ancient annual Lectionary), the fasting guidelines for the day, and the saints that are commemorated on that particular day. This is an example of a calendar for a Russian Orthodox parish in the United States: 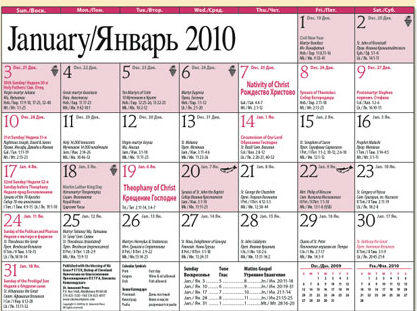 During 2013, it was noticed that 36 names that had been on the prior year's calendar were not on the 2013 calendar. Abbot Damascene Orlovsky of the New Martyr committee explained the 2013 calendar corrections:

In 2011 our committee assignment was to ...develop a comprehensive list of martyrs, each with the name, the place of his ministry, the place of death, and so on. It is very important for this to be done, because before that they were listed in our calendar only by the names, leaving the reader to investigate [the details] separately.

We have prepared this list (and at the same time corrected a lot of mistakes in dates and names), and handed it to the Most Holy Patriarch. His Holiness the Patriarch reviewed this list and decided to submit it to the Publishing Department of the Moscow Patriarchate.

Claims that those previously considered New Martyrs were removed from the list because evidence emerged that they collaborated with the Communists are speculation. Alexander Nevsorov (shown in the video) is a rabid secularist and atheist who was once expelled from the Moscow Theological Academy. The issue first seemed to surface when a Russian deacon, Andrei Kuraev, published the following on his livejournal page:

The most important part of the liturgical calendar is a list of the saints whose memory falls on any given day.

The canonization of a saint necessarily implies its inclusion in the calendar.

Although bloggers such as Durayev have speculated that the removal of the names is because they have been "decanonized", to my knowledge this has never been confirmed. The list of names is public and one would think that in the intervening 4 years proof would have emerged that the people listed were KGB collaborators or whatever else is speculated. It may simply be as Abbot Damascene states - that when examined, key details in the various cases were found to be lacking or inconsistent and did not meet the standard set by the committee.

Not the answer you're looking for? Browse other questions tagged eastern-orthodox saint or ask your own question.

12
What does “the saints are not keepers of the law, but legislators” mean?
5
For Eastern Orthodox churches, what are the main references concerning Biblical Interpretation methodology?
2
What are the differences between Catholic and Episcopal saints?
6
In Catholicism, what can the Saints be patrons of?
5
What are the main reasons of EOC for why the Protoevangelium of James was not to be included in the canon?
1
From an Orthodox perspective…how do we know the saints specifically hear an individuals prayers?
2
What is the biblical basis for the assignment of patron saints?
3
In 1943, the Russian Orthodox Church permitted the women's name Svetlana. Was it made specifically for Stalin's daughter?