What is Heaven's Mercy Seat?

My understanding is that the Mercy Seat is where God resides, and I think it might even be the Ark of the Covenant - but if that is the case, it seems as though it should be associated more with God the Father than God the Son. Is this just a case of Phillippians 2 (At the name of Jesus every knee shall bow) or is there more? Or, am I just misinterpreting "Him who sits on Heaven's Mercy Seat?"

So, biblically then, what exactly is the Mercy Seat? Where can I read about it, and more importantly, what does it mean for Jesus to be sitting on it?

The mercy seat is an incredibly dense and intertextual image, with a long history in Christian culture. Below is an illustration by Michiel van der Borch from a 1332 copy of the "Rhyme Bible" (which despite the name, does not rhyme and is not a Bible), showing many facets of the concept. 1 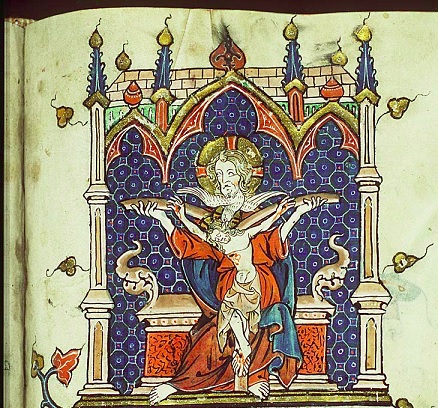 Here, God the Father sits on a throne that might look a bit like the Ark of the Covenant; he is holding the crucified Christ in his lap, and the Holy Spirit is also present as a dove. This is actually a fairly common artistic motif for showing the Trinity, often called the "Gnadenstuhl" image (German for "grace stool" or "mercy stool"). Anyone who thinks "oh, now that makes total sense" can stop reading now. For everyone else...

Biblically, the original element is the Ark of the Covenant. From descriptions in the Torah2, we learn that the Ark has a golden lid called the kapporeth (כַּפֹּ֫רֶת). The lid therefore covers the tablets of the Law, kept inside the Ark. It also has two angelic figures mounted upon it, who stretch out their wings above the Ark: this space between the wings was particularly associated with the presence of God, and seen as a sort of earthly shadow of God's heavenly throne (see e.g. 1 Samuel 4:4).

Of course, the whole Ark was meant to be kept in a place of sanctity, the summit of the system of ritual purity. Ultimately, only the High Priest could enter the Holy of Holies in order to offer a sacrifice on the Day of Atonement, Yom Kippur - he would sprinkle the blood of a bull on the kapporeth, as the climax of all ceremonies and observances directed towards the seeking of atonement. The similarity between the words "Kippur" and "kapporeth" is no accident: the concept of "covering" is etymologically and philosophically linked to the idea of having sins "made better". In the Greek Septuagint, the word used is hilasterion (ἱλαστήριον), which more directly means something like "propitiation", "atonement", or "expiation", and appears again in the New Testament. (See: "How should ἱλαστήριον (hilasterion) be translated in Romans 3:25?" on BH.SE.)

A very direct connection is made by the author of Hebrews in chapter 9. Verse 5 repeats the idea of the hilasterion. But now Christ is come to be both High Priest and sacrifice.

But when Christ came as a high priest of the good things that have come, then through the greater and perfect tent (not made with hands, that is, not of this creation), he entered once for all into the Holy Place, not with the blood of goats and calves, but with his own blood, thus obtaining eternal redemption.

Nor was it to offer himself again and again, as the high priest enters the Holy Place year after year with blood that is not his own; for then he would have had to suffer again and again since the foundation of the world. But as it is, he has appeared once for all at the end of the age to remove sin by the sacrifice of himself. (verses 11-12 and 25-26, NRSV)

The mercy seat, which was the sign of God's presence and the place of atonement, is now identified with the ultimate act of atonement performed by Christ, in his own person. If we look back at the illustration above, we can now understand Christ being received as a sacrifice on the throne/altar/Ark. He has replaced the old system of purity under the Law, and is being crucified symbolically "above" the Law.

Moreover, God's presence in the world is now the body of Christ himself - "God with us", the Word made flesh - and for that reason the mercy seat is also sometimes associated with the Eucharist. As Peter Turner points out in a comment above, the Ark may stand for Mary, which is another link to the reality of God's presence due to his Incarnation.

Because the Ark is a sort of earthly throne for God, mirroring the heavenly throne, there is some cross-pollination with other Biblical throne imagery. In Hebrews 4:14-16 is the famous language of the "throne of grace", associated with Christ as High Priest. There is also the throne of Revelation 4. The song lyrics you refer to in the question are clearly drawing partly from this chapter (throne, rainbow, lightning, "Holy, Holy, Holy") as well as the following one. The mercy seat reference is:

Worthy is the Lamb who was slain
Holy, Holy, is He;
Sing a new song to him who sits on
Heaven's mercy seat.

This comes from Revelation 5, where Christ is presented as the slain Lamb:

They sing a new song: "You are worthy to take the scroll and to open its seals, for you were slaughtered and by your blood you ransomed for God saints from every tribe and language and people and nation; you have made them to be a kingdom and priests serving our God, and they will reign on earth." [...] "To the one seated on the throne and to the Lamb be blessing and honor and glory and might forever and ever!" (verses 9-10 and 13, NRSV)

Brethren, we haue Iesus Christ the righteous and aduocate with the Father, he is the mercie seate of our sinnes.3

This makes sense if we read the image, in a more general way, as something like "the locus of God's sacrificing presence".

The Catholic Catechism refers to the mercy seat explicitly in one paragraph:

The name of the Savior God was invoked only once in the year by the high priest in atonement for the sins of Israel, after he had sprinkled the mercy seat in the Holy of Holies with the sacrificial blood. The mercy seat was the place of God’s presence. When St. Paul speaks of Jesus whom “God put forward as an expiation by his blood,” he means that in Christ’s humanity “God was in Christ reconciling the world to himself.” (CCC 433)

We know that it was the place of God's presence from Exodus 25:22:

There I will meet you and there, from above the cover, between the two cherubim on the ark of the covenant, I will tell you all that I command you regarding the Israelites.

1 After the death of Aaron’s two sons, who died when they encroached on the LORD’s presence, the LORD spoke to Moses 2 and said to him: Tell your brother Aaron that he is not to come whenever he pleases into the inner sanctuary, inside the veil, in front of the cover on the ark, lest he die, for I reveal myself in a cloud above the ark’s cover.

The cover in this and the surrounding verses was sometimes translated as mercy seat:

Cover: the Hebrew term, kapporet, has been connected with kippur, as in the feast of Yom Kippur or Day of Atonement (Lv 16; 23:26–32): hence, influenced by the Greek and Latin versions, and Luther’s German, English translations have rendered it “propitiatory,” “mercy seat,” and the like. (Ex 25:17 footnotes)

So, the Biblical Mercy Seat is the Ark of the Covenant's cover. God made Himself present on the Day of Atonement between its cherubim, God's earthly throne and place of Lordship over The Ark of the Covenant and The Law. Because God said He would appear there, it can be assumed that He who appears there is God.

Now, transport the whole thing into heaven (into eternity), and the Heavenly Mercy Seat can be understood as God's eternal throne over the eternal ark of the [new and] everlasting covenant of the eternal Law. For the Lamb Slain, Christ, to appear on the Heavenly Mercy Seat is to assert that the Crucified Christ is the Lord of the New and Everlasting Covenant and the Eternal Law.

It's an assertion that Christ is God.

Not the answer you're looking for? Browse other questions tagged hymns ark-of-the-covenant .

3
What denominations use gender-inclusive hymnology?
7
What was Isaac Watts' theological background?
26
What is the oldest hymn (with music) that is still sung in churches today?
4
What is the role and significance of Zion in Christianity?
9
Do Mainline Presbyterians oppose Satisfaction Theory? Is this why "In Christ Alone" was rejected for their Hymnal?
7
What is Matt Redman's denominational background?
8
What does "Christ was born across the sea" mean in Julia Ward Howe's The Battle Hymn of the Republic?
4
According to Protestants, what is the lesson being taught by scripture when God killed so many men for looking into the Ark?
7
What hymns about death were common in the early 1400s?