The Sarum rite was the traditional rule of liturgical worship for Catholics in England, and to some extent in the rest of the British Isles, for many years. It is related to the Roman rite, and to various other historical regional or diocesan versions. It is not used today, though I gather there are still Catholics and Anglo-Catholics who are interested in it (and even some Orthodox churches).

I've heard two stories about why it's defunct. Both relate to the restoration of the hierarchy in England, and of normal church order, in the nineteenth century.

Which of these, if either, is true?

In addition to Wikipedia, I find the Catholic Encyclopedia useful for historical queries. It has an article on the Sarum Use.

The Use of Sarum was initiated there (Salisbury) in the eleventh century and spread throughout southern England. It was suppressed by the English Reformation and especially during the reign of Elizabeth I.

Catholic Encyclopedia notes: During the few years of the reign of Mary Tudor an attempt was made in England to resuscitate the Sarum Use, which lingered on for sometime afterwards among the Seminary priests of persecution times; but it is now wholly obsolete, except, as the reader will have remarked, in so far as the Dominican, Carmelite and kindred Uses, cling, like that of Sarum, to certain liturgical practices derived from early Roman discipline, but which the Church has allowed to fall into desuetude.

That is, once Catholicism was outlawed, the Use of Sarum with its associated ceremonial became all but impossible to celebrate outside seminaries, and even they were suppressed. When catholics became tolerated again (with the Catholic Relief Act of 1778), and restored in 1829, it was the Tridentine Rite to which English Catholics turned as that was most readily accessed from the continent.

Neither of your options is really true: it was never suppressed by Rome, but it wasn't really a realistic option to recover.

As Matthew has noted in his answer, Anglicanorum coetibus has allowed Anglicans to join the Church [Yours Truly included], bringing their patrimony with them. It is a little ironic that elements of the Sarum Use are being re-introduced to the English Church with Anglicans influenced by the Oxford Movement, which made a conscious effort to draw on "English" pre-Reformation practices within the context allowed by law.

I cannot answer your question concerning exactly how the English moved away from this Rite. As I understand it this Rite was never officially suppressed by Rome. The Rite however is not completely defunct.

The Catholic church recently authorized an Anglican Use Rite. Pope Benedict promulgated this in 2009 with the document Anglicanorum coetibus. (We are blessed at my parish to have a priest with 5 children and a wife!) Parts of the Sarum Rite are used in this and there is discussion of reviving the entire Rite for Catholic Anglican Use parishes. The text of the document would allow this. The difficulty as I understand it is that this Rite would be unfamiliar to most Anglicans coming into communion with Rome. I hear that there are some Western Orthodox who use this rite as well as some high Anglicans who preserve it.

First of all, let us set the historical stage as best we can.

On July 14, 1570 Pope St. Pius V issued his now famous Quo Primum which suppressed any and all liturgical rites that were less than 200 years old. Those regions in which had usage of a local variation of the Latin Rite of less than 200 years were obliged to accept the Roman Rite Missal of Pope Pius V. The Sarum Rite , as well as all the other Rites, that existed in England at the time of Pope Pius V's Quo Primum enjoyed the privilege of remaining a valid variation of the Roman Rite because of they were clearly over 200 years old.

This new rite alone is to be used unless approval of the practice of saying Mass differently was given at the very time of the institution and confirmation of the church by Apostolic See at least 200 years ago, or unless there has prevailed a custom of a similar kind which has been continuously followed for a period of not less than 200 years, in which most cases We in no wise rescind their above-mentioned prerogative or custom. However, if this Missal, which we have seen fit to publish, be more agreeable to these latter, We grant them permission to celebrate Mass according to its rite, provided they have the consent of their bishop or prelate or of their whole Chapter, everything else to the contrary notwithstanding. - Quo Primum

Now let us set the stage in England from the 16th century to our days.

When the Church of England separated from the Catholic Church in the 1530s, it initially retained the Sarum rite, with gradual modifications. Under Edward VI, Protestant pressure for public worship in English resulted in its replacement by successive versions of the Book of Common Prayer in 1549 and 1552. Mary I restored the Sarum rite in 1553 and promulgated it throughout England, but it was finally abolished by Elizabeth I in 1559. - Use of Sarum

But the main reason why the Sarum Rite fell into disuse is the fact that English seminarians who were studying for the priesthood on the continent and then returned to England were eventually only taught to say the Tridentine Mass (as was the liturgical custom in Douai, France) and not the Sarum Mass which was the true English Mass to be preserved and it was not. How sad.

Both the Wikipedia and Catholic Encyclopedia articles on the Sarum rite indicate that it was in existence in England from the early 11th Century A.D. and into the Sixteenth Century. More particularly, in its entry on “Sarum, Use of” in Tudor England: An Encyclopedia, the author of that article notes that soon after 1075, St. Osmond established a cathedral chapter at old Sarum, and probably compiled its first guidelines of the chapter and its new rite, The Institution.

While Queen Elizabeth I outlawed that rite in England in the year 1559, it endured in persecution and martyrdom into the Seventeenth Century. More particularly, as the Reverend Father John Hunwicke has pointed out, there is evidence that at the English Seminary in Douai, which supplied the priests who still served in England, the seminarians there were not instructed in the use of the Tridentine Mass until 1577, seven years after the promulgation of Quo Primum. The above cited article from the Tudor Encyclopedia also states that “Sarum liturgies continued surreptitiously among recusants such as William Byrd, and, until 1577, at the English College at Douai.”

Catholics became tolerated again in Great Britain with the Catholic Relief Act of 1778, and were restored as a Church with the right to hold property and to worship freely in 1829. At that time, the Catholic hierarchy in Great Britain decided to adopt the Tridentine rite for their worship, as was permitted them under Quo Primum. - A Case for the Restoration of the Sarum Rite in the Roman Catholic Church

In Pope Benedict XVI's Apostolic Constitution Anglicanorum Coetibus, it seems that the Holy See allows for the possibility of the Sarum Usage to be employed within the Roman Rite as "providing for Personal Ordinariates for Anglicans entering into full communion with the Catholic Church."

Without excluding liturgical celebrations according to the Roman Rite, the Ordinariate has the faculty to celebrate the Holy Eucharist and the other Sacraments, the Liturgy of the Hours and other liturgical celebrations according to the liturgical books proper to the Anglican tradition, which have been approved by the Holy See, so as to maintain the liturgical, spiritual and pastoral traditions of the Anglican Communion within the Catholic Church, as a precious gift nourishing the faith of the members of the Ordinariate and as a treasure to be shared. - Anglicanorum Coetibus

As a side note, I would like to add what the Curé d'Ars (St.Jean-Baptiste-Marie Vianney) said to Bishop Ullathorne, Bishop of Birmingham in 1854 that England may one day be restored to it's past splendor yet.

Of his gift of prophecy one instance must suffice—it is of enormous interest to us in England. On May 14th, 1854, Bishop Ullathorne called on the holy man and asked him to pray for England. The bishop of Birmingham relates that the man of God said with an accent of extraordinary conviction: "Monseigneur, I believe that the Church in England will be restored to its splendour." May this prophecy receive a full and speedy fulfillment — not least through the prayers of him who made it! - THE CURE OF ARS (ST. JEAN MARIE BAPTISTE VIANNEY, 1786-1859)

There are some of the opinion that the Sarum Use is morally available to clergy of the British Isles, though it is now subject to a legal and liturgical "dubium" which really needs clearing up. It needs somebody with more leisure than I have to pursue it. The restoration of the Sarum Rite is possible, but it definitely will take time (further resource is most needed):

The Legal Status of the Sarum Mass

The Use of Sarum: A Brief History and Why It Matters

Sarum Candlemas 01 (YouTube) with Sarum Chant and not Gregorian Chant being employed in the video. 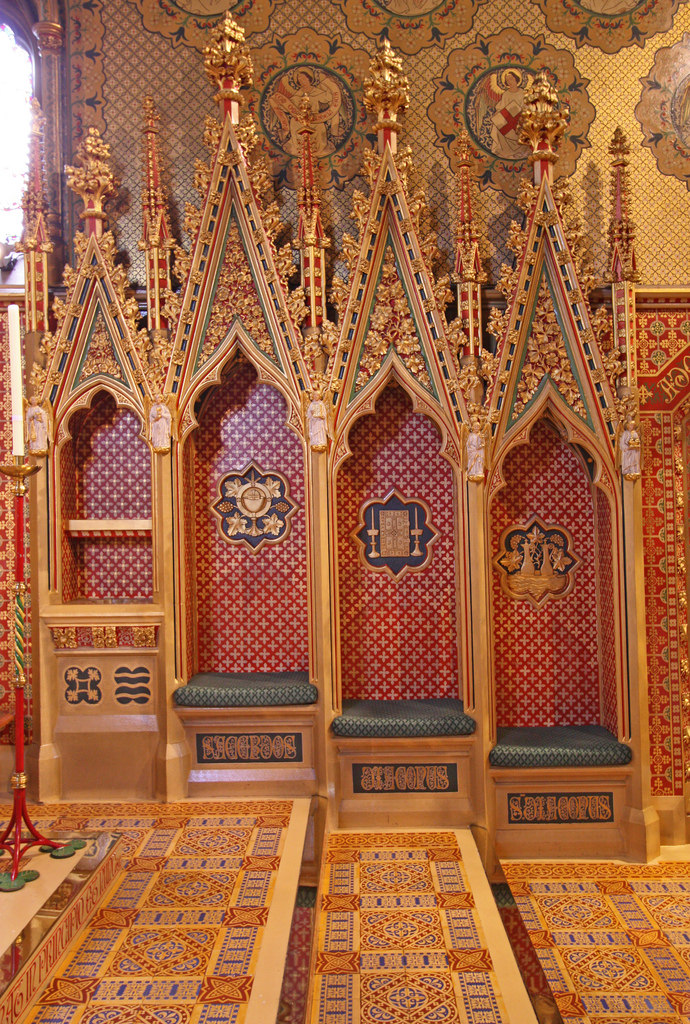 Not the answer you're looking for? Browse other questions tagged catholicism history liturgy or ask your own question.

8
What's the new rite in Tantum Ergo?
7
Is there a generally accepted term for "Christians in Communion with the Bishop of Rome"?
12
Can priests (or popes) administer sacraments in a liturgy other than their own?
4
Did the Annunciation and Good Friday coincide?
3
Are there any Tridentine Rite Catholic communities that also use the Liturgical Calendar of 1970?
5
Why are Catholic bishops styled as archbishops?
5
What is the difference between a Use and a Rite?
3
What kinds of things are mutable in Latin Rite Catholic Liturgy?
8
Reasons for Restriction of Tridentine Rite post Vatican II
2
Is it only Roman Catholicism that teaches the possibility of universal vulnerability of demon possession?