What is the role of Mohammed in the Bible?

John 14:16 and 14:26, which refer to a Paraclete ("comforter"), have been read by Muslims as a prediction that Muhammad will succeed Jesus.

"And I will pray the Father, and he shall give you another Comforter, that he may abide with you for ever." (John 14:16)

"But the Comforter (Paraclete) whom the Father will send in my name, he shall speak to you all things, and bring all things to your remembrance, whatsoever I have said unto you." (John 14:26)

What does Christianity say about the role of Mohammed in the Bible? What is relationship between Christianity and Islam?

Muḥammad has absolutely no role in Christianity, and there is no explicit mention of him in the Christian Bible.

The first «παράκλητος» (“Comforter”) was the Lord Jesus Christ.

1 My little children, I write these things to you so that you do not sin. And if anyone sins, we have a comforter with the Father, Jesus Christ the righteous.

16 And I shall ask the Father, and He shall give you another Comforter, so that he may dwell with you forever, 17 the Spirit of truth, whom the world cannot receive, because it does not see him, neither does it know him, but you know him, for he dwells with you, and he shall be in you. 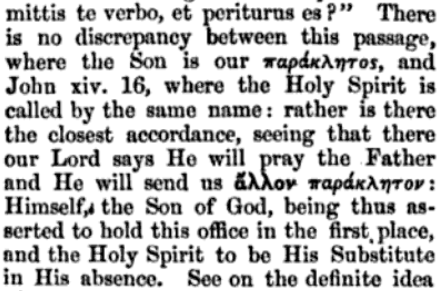 In addition, regarding the Spirit of truth, the Lord Jesus Christ told the apostles that “he dwells with you, and he shall be in you.”2 The Greek verb «μένει», translated as “dwells,” is conjugated in the present tense, meaning that the Spirit of truth was dwelling with the apostles, right then, and right there, in the present. Muḥammad was not born for another 500-600 years. Therefore, Muḥammad could not be the other Comforter, the Spirit of truth. In addition, even Muslims would never admit that Muḥammad is actually in them. On the other hand, the Holy Spirit dwells in Christians.3

The Prophecy of Joel

In the New Testament, the apostle Peter confirms that this event occurred at Pentecost.

1 And when the day of Pentecost was fully come, they were all of one accord in one place.

4 And they were all filled with the Holy Spirit, and they began to speak with other tongues, as the Spirit gave them utterance.

The Inadequacy of any Future Revelation

The reason is simple. A messenger is sent by, and delivers a message or revelation on behalf of, someone greater in authority. In the case of Moses, a man, he was sent by Yahveh, God, to deliver Yahveh’s message and revelation to the people of Israel.6 However, because Moses was a man, this left open the possibility that someone “greater than Moses” (i.e., a greater man) could come thereafter to deliver another message or revelation on behalf of Yahveh to the people of Israel. Of course, the one “greater than Moses” was the Lord Jesus Christ.7

Since Muḥammad is just a man, and in addition, he claimed to have received the Qurʿān, not directly from God, but from the angel Gabriel, his message and revelation can in no way supersede that of the Gospel delivered by the Lord Jesus Christ, God incarnate, who spoke only what God the Father gave him to speak.9

There is one more thought that I feel is necessary to include. In Gal. 1:8-9, the apostle Paul wrote,

Since the revelation of Muḥammad which he claimed to have received from an angel contradicts the Gospel of the Lord Jesus Christ that was later preached by the apostle Paul and the other apostles, Muḥammad is considered anathema, or “accursed.”

From a Christian perspective, there is no role for Mohammed in the Bible. "The comforter" is believed to be the Holy Spirit.

From Gill's Exposition of the Entire Bible

and he shall give you another Comforter. This is no inconsiderable proof of a trinity of persons in the Godhead; here is the Father prayed unto, the Son in human nature praying, and the Holy Ghost the Comforter prayed for; who is the gift of the Father, through the prevalent mediation of the Son, and is another "Comforter"; distinct from the Messiah, to whom reference is here had! One of the names of the Messiah, with the Jews, is (u), "a Comforter"; such an one Jesus had been to his disciples; and now he was about to leave them, and for their support under their sorrows, he promises to use his interest with his Father, that he would give them another Comforter, meaning the Spirit, who performs this his work and office, by taking of the things of Christ, and showing them to his people; by shedding abroad the love of the Father, and of the Son, into their hearts; by opening and applying the precious promises of the Gospel to them; by being a spirit of adoption in them; and by abiding with them as the seal, earnest, and pledge of their future glory; and with this view Christ promises to pray for him,

I would not be so sure to exclude any reference to Muhammad from the Bible. In fact there is a fairly mainstream historical view of Revelation that directly includes him as the leader of a Saracen invasion that invaded Christianity like a 'locust plague' in the seventh century. A review of the symbol and the history arguably describes the prophecy in an uncanny manner.

The location of the Saracen invasion is arguably tied into these verses as well as a few verses before:

The locusts looked like horses prepared for battle. On their heads they wore something like crowns of gold, and their faces resembled human faces. Their hair was like women’s hair, and their teeth were like lions’ teeth. They had breastplates like breastplates of iron, and the sound of their wings was like the thundering of many horses and chariots rushing into battle. They had tails with stingers, like scorpions, and in their tails they had power to torment people for five months. They had as king over them the angel of the Abyss, whose name in Hebrew is Abaddon and in Greek is Apollyon (that is, Destroyer). (Revelation 9:7-11, NIV)

According to this view it is argued that:

the hieroglyphic itself as by the words of explanation accompanying, that to the Arab cavalry hordes, emerging from the smoke of the hellish exhalation, there would be opened a fearful career of conquest over Roman Christendom: one in which, as just hinted before, they would fly, as it were, with locust-wings, destroy what opposed them with the strength of lions’ teeth, and torment the subjugated Christian inhabitants as with the poison of a scorpion-sting.—And was there then a correspondence with this in the facts of the subsequent Saracenic history?—It was in the year 629 that the Saracens under Mahomet himself first issued from the desert into Syria, with proclamation of war against Christendom. (Horae Apocalypticae; or, A commentary on the Apocalypse, critical and historical; including also an examination of the chief prophecies of Daniel 1862, Vol 1, P449)

The reason for matching the symbol to this period is not only because it historically follows in order after the opening of the previous seals, but it seems alone answers the peculiarities of the symbol in an exacting manner. The image matches the 'swarming numbers' of the Muslim invaders. Their historical progress of attacking Christianity almost immedietly after the birth of their religion was noted for "progress rapid, far-ranging, and irresistible". Furthermore, historically they were known to be "wide wasters of the herbage and vegetation." "The horse-like appearance seemed to imply that they would be hordes of cavalry; the likeness to the lion, that they would be savage destroyers of life; and the scorpion-likeness, that of the men in Roman Christendom, whose lives they spared, they would be the tormentors, even as with a scorpion’s poison-sting."

Furthermore the locust is peculiarly Arabic, even biblically, as in the plague under Moses the locusts came from an 'east wind.' Arabia being east of Egypt. The scorpion is also native to the Arabian desert. Arabia is also regarded by as the "original country of the horse" and that in it's wild wildernesses are the "haunts also of the lion."

Even more striking the locust was human in the appearance with male faces but "hair as the hair (the long hair) of women, with crowns as of gold on their heads, (or, it might be, gold-adorned turbans) and breast-plates like iron." The history of Muhammad and the early Muslim Saracens also war iron breast plates. Clearly the symbol can be seen like a hand to a glove, a mixture of meaningful symbolism pinned to literal realities.

But it is further said that the locusts issued out of the smoke of the bottomless pit. The historical argument also finds meaning here:

Who knows not of the sudden rise of Mahommedism in Arabia, just at the very time we speak of:—that most extraordinary invention of fanaticism and fraud; which being, as it was, from beginning to end a lie, in its pretensions superseding the Gospel of the Lord Jesus, in its doctrines inculcating views of the blessed God dark, cruel, and unholy, and in its morals a system of pride, ferocity, superstition, sensualism,—indicated too well, to any one who had eyes to see, that it had indeed its origin from hell, and was an emanation, like the pestilential smoke in the vision, from the pit of the abyss? (Horae Apocalypticae; or, A commentary on the Apocalypse, critical and historical; including also an examination of the chief prophecies of Daniel 1862, Vol 1, P442)

So maybe after all, Muhammad is mentioned in the Bible, just not in the way that Muslims might approve of? As a Christian this view is not very persuasive unless a historical view of Revelation is adopted.

The total canon of the Bible had been set hundreds of years before Muhammad was even born. The first council of Nicea took place in 325 AD, long before the Prophet of Islam was even a gleam in his daddy's eye. The Prophet was born in 570AD. So, as you can see, there is no possible way that Muhammad, the prophet of Islam could have been mentioned in or have any role whatsoever in the Christian Bible.

Now, insofar as the Qu'ran is concerned, Jesus is highly revered as a prophet of Allah (God) in that book. But Jesus, Moses, Abraham, Noah and even Adam are considered true Muslims. How that can be I don't know but that's what most Muslims believe.

Not the answer you're looking for? Browse other questions tagged gospel-of-john islam or ask your own question.

2
Is the Comforter a person?
8
The Mormon Church teaches that Joseph Smith saw God the Father and His Son. How do you reconcile this when the Bible says the Father cannot be seen?
3
How do non-trinitarians interpret John 14:26?