Why is the Exsultet so keen on bees?

The Exsultet or Exultet is a beautiful Latin hymn for the Easter vigil. There are a few different versions. Part of the ceremony involves lighting the Paschal candle, and the text thanks the bees who produced the wax:

For [the candle] is fed by melting wax, drawn out by mother bees to build a torch so precious.1

The candle is also called "the work of bees and of your servants' hands" in another part of the text.

Of course it is nice to recognize the contribution of the bees. But this feels like a bit of a digression in a hymn which is otherwise all about God. Is there some reason why bees are specifically mentioned?

1. English rendering from the International Commission for English in the Liturgy, 2010.

The bee represents Mary, the mother of Jesus. (In fact, it's a fairly safe bet that just about anything represents Jesus or Mary or both.) Other versions of the Exultet text make this explicit; the "Franco-Roman version" has a long we-love-bees section, as recorded by Thomas Forrest Kelley in his The Exultet in Southern Italy (OUP, 1996), p38, concluding with:

O truly marvelous bee, whose sex is not violated by the male, nor shattered by childbearing, neither do children destroy her chastity. Just as holy Mary conceived as a virgin, gave birth as a virgin, and remained a virgin.

This alludes to the old belief that bees reproduced asexually. Isidore reports in Etymologiae 12.8 that bees, like other small flying animals, are spontaneously generated from the carcasses of animals. So also, Augustine says in City of God 15.27 that bees have no distinction of male and female (alia vero in quibus nihil sit maris et feminae, sicut apes). This comes from ancient sources: Pliny in Natural History 11.16 suggests that they might weave their young out of parts of flowers; and Aristotle (On the generation of animals 2.10) says they are hermaphrodites, and do not copulate with one another.

We now know that they really couldn't have been more wrong, but the sentiment is there.

We have several copies of "Exultet rolls" which have bee illustrations to accompany the vigil text, indicating the great interest and respect that people had for them. Here is an eleventh century one, from Bari (Archivio del Capitolo Metropolitano, Exultet 1). 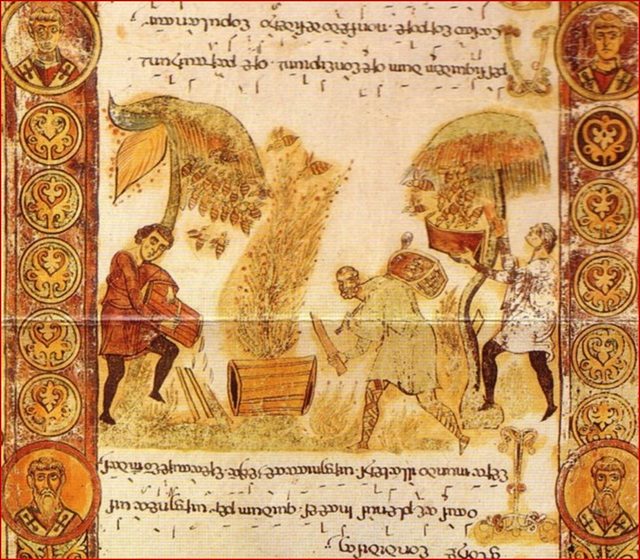 Bees were an example of industry, and esteemed because they provided so many useful things - in particular, honey and light (via the candle). Both honey and light have obvious Biblical resonances. Additionally, gifted orators and writers were said to have a "honeyed tongue", and so some saints may be depicted with accompanying bees (e.g. Ambrose, Anthony of Padua, Bernard of Clairvaux, Isidore of Seville).

Not the answer you're looking for? Browse other questions tagged virgin-mary easter hymns or ask your own question.

7
How widely used is "beehive" imagery?

4
Why did "Lift Every Voice and Sing" become the "Black National Anthem"?
26
Why do I sing, "Here I raise my Ebenezer?"
6
Why are the same palms used on Palm Sunday used for Ash Wednesday services the next year?
6
Why is "We Three Kings" a Christmas hymn, and not a Lenten one?
10
Why does the Battle Hymn of the Republic say Jesus was born "in the beauty of the lillies"?
4
When and by whom was the Exsultet written?
3
Why is the Lord's Passion read on Palm Sunday (in the Roman Catholic tradition)?
1
Not understanding the meaning of the song Resurrecting by Elevation Worship
4
Why is the Feast of the Visitation held on May 31st, during the Easter/Pentecost season?