How does the feast of Corpus Christi fit into the church calendar?

Looking at the calendar today, I noticed that it's Corpus Christi, which celebrates the Real Presence of Christ in the Eucharist. Maundy Thursday recalls the day the rite was first observed and seems the natural day for such a commemoration. The Catholic Encyclopedia indicates the reason a separate feast was established:

[Maundy Thursday], however, was in Holy Week, a season of sadness, during which the minds of the faithful are expected to be occupied with thoughts of the Lord's Passion. Moreover, so many other functions took place on this day that the principal event was almost lost sight of. This is mentioned as the chief reason for the introduction of the new feast, in the Bull "Transiturus."

As a movable feast, Corpus Christi has some connection to Easter in the church calendar. But what is the connection? It makes sense to celebrate on a Thursday, the traditional day of the week of the Last Supper. But why celebrate the Thursday after Trinity?

When the feast was established in 1264, the feast of Pentecost had an octave1 and effectively lasted a week, up to Trinity Sunday. This meant that the first "unimpeded" Thursday following Maundy Thursday was the Thursday after Trinity — the season of Easter impeded2 all the Thursdays up to Pentecost, which had its own octave covering the Thursday after that.

The text of the Bull Transiturus which established the celebration is published in a Google Book, and it does set the day: 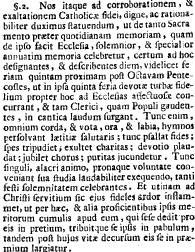 This is my attempt at a translation:

And so, we, for the affirmation and exaltation of the Catholic faith, have properly and reasonably determined that besides the daily memorial of so great a sacrament, such as the Church does, a solemn and special memorial is to be celebrated annually, specifically designated for this, and describe the day, namely the Thursday next after the octave of Pentecost, that in this the fifth day of the week, for the sake of the happiness of the devout multitudes of the faithful, clergy with the rejoicing people come together in the churches and arise in a song of praise. ...

A better translation would be greatly appreciated. The last clause at least is a bit iffy.

1 Octave: A period of extending a feast-day over the following week, making eight days in total. See the Wikipedia article. Pentecost is slightly unusual as its Octave does not include the following Sunday. That Sunday is a feast of its own, Trinity Sunday.

2 Impede: A celebration of lower rank is impeded (or suppressed) by a celebration of higher rank. Although Corpus Christi was intended to be "solemn and special", nothing outranks the days of the season of Easter. The General Norms for the Liturgical Year and Calendar say "The fifty days from Easter Sunday to Pentecost are celebrated in joyful exultation as one feast day, or better as one 'great Sunday'", so it would be improper to introduce another element into that celebration. [The ranks of various feasts and seasons during the 13th century are now rather obscure, but Easter has always ranked above everything else.]

5
Why is the Solemnity of the Immaculate Conception treated differently?
3
How was the Catholic Easter calendar established, despite this passage?
5
Jewish Festival of Lights and the Feast of the Immaculate Conception?
3
What liturgical calendar does the Anglican Ordinariate follow?
4
What does "Style" mean in the context of feast days
3
Why is the feast of the Visitation not transferred when impeded by Corpus Christi?
4
How does Roman Catholicism justify a literal meaning of 'Hoc est meum corpus'?
2
Into what eschatological category do the teachings of the Catholic Church fit?