What is the purpose and meaning of the Christian Flag?

Many of you have probably seen the Christian flag: a white flag with a red cross on a blue corner.

It's a staple of some churches and many Christian schools.

Do the colors have specific significance? How to the flag come to be and what purpose does it serve to the church? 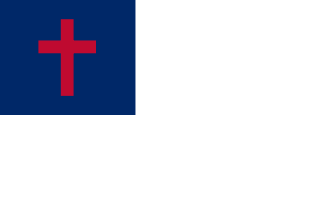 The "Christian Flag" was conceived by Charles Overton, who in 1897 was superintendent of the Congregational Sunday School at Brighton Chapel, Coney Island, New York, USA.1 (That community was incorporated as St Paul's Evangelical Lutheran Church of Coney Island in 1907, and it still exists today). On 26 September of that year, he gave a sermon musing about what kind of flag might represent the Christian faith, in the same way as the American flag represents the United States. Following on from that, he designed the emblem and formed a group (the Christian Flag Extension Society) to promote it. This included efforts to have the flag officially recognized by the US government, and adopted in its military chaplaincies. 2 The first flags made to his design were manufactured by the Annin company, which still makes them today. 3 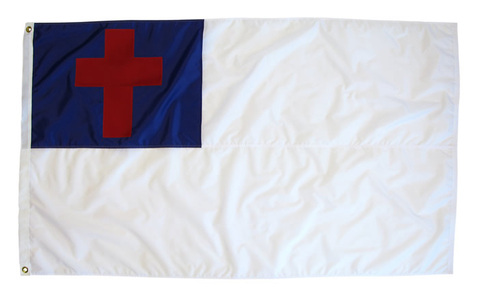 It is truly symbolic. The ground, which is five-sixths of the whole, is white, the universal peace color, representing peace, purity, and innocence. In the upper corner is a blue square, the color of the unclouded sky, emblematic of heaven, the home of the Christian, also a symbol of faith and truth. In the center of the blue is the cross, the ensign and chosen symbol of Christianity. The cross is red, typical of Christ's blood. Every sect of Christ's followers can indorse the flag, and it is equally acceptable to all nations. It stands for no creed or denomination, but for Christianity.4

Additionally, "white is recognized as the flag of truce on every battlefield, and as soon as a flag of this color is seen the cannon's roar is silenced." 3 It may be that the red-white-blue combination of the Overton flag was chosen to echo the colors of the American flag.

The Overton design violates the heraldic rule of tincture by placing the red cross on the blue canton. This seems to be unintentional, though the arms of the Kingdom of Jerusalem deliberately did the same (gold on white) as a mark of honor.

Some alternative flag designs were proposed in the same era, including the so-called "Crusader Flag", a red cross on a white field bearing the motto "In this sign conquer". Several individual churches or denominations have their own unique flags as well. Perhaps the flag of the Vatican is the only one of these that qualifies as intended to be universal, though of course non-Catholics are liable to disagree with the claim. Conversely, the "Christian Flag" is Protestant in origin and remains most popular among American Protestants.

James answers admirably about the origin of the flag and the meaning behind its symbols. I just want to add a note about its purpose. That is, why have a Christian flag at all?

Background: Flags in the Bible

The entry for banner in Easton's Bible Dictionary mentions these uses of flags/banners in the Bible, as cited on this Catholic site in support of the Christian flag:

The banners and ensigns of the Roman army had idolatrous images upon them, and hence they are called the "abomination of desolation" (q.v.). The principal Roman standard, however, was an eagle. (See Matthew 24:28; Luke 17:37 , where the Jewish nation is compared to a dead body, which the eagles gather together to devour.)

God's setting up or giving a banner (Psalms 20:5; 60:4; Cant. 2:4) imports his presence and protection and aid extended to his people.

According to a 1909 article in the Christian Advocate cited by Wikipedia, it is meant to represent the unity that Christians experience above and beyond their denominational or national identities:

Within recent years (1897) a flag has been designed which shall stand as an emblem around which all Christian nations and various denominations may rally in allegiance and devotion.

Mr. Overton has dedicated his flag to the Christian world, refusing to copyright or patent it. It stands for no creed or denomination, but for Christianity. Every sect of Christ's followers can indorse this flag and it is equally appropriate for all nations.

The same article says, "The use of the national flag in Christian churches has become almost universal throughout the world." This further reinforces the point. Churches had displayed the national flag for a long time, and this was presenting them with an opportunity to demonstrate that, though they belong to their country, they have a higher allegiance: a country without borders, as Switchfoot sings.

This page from the Prayer Foundation says that the flag is uniquely "free" and is meant to represent Christian unity:

Since the flag is not tied to any specific denomination or church institution, it represents the unity of all Christians despite historical, cultural, and dogmatic differences. Its simplicity makes it easily copied by any community of Christians.

The Christian flag is the only free flag in the world. It is different from every other flag, religious or secular, ancient or modern. It is uncontrolled, independent, and universal. Unlike all national flags and all denominational flags of various churches, it has no earthly bonds or allegiances. Christ and Christ alone is its Master. Without limitation, it exists for all the world's people regardless of sex, race, national boundary, economic condition, affluence, or poverty, politics, slavery or freedom. It cannot be restricted by any nation or denomination. This unique, universal quality makes it like the air we breathe, belonging to all and yet owned by none. For those who want it, wherever and whenever, it is freely theirs. ... It belongs only to Christ and the Cross which symbol it bears.

Not the answer you're looking for? Browse other questions tagged symbolism flag or ask your own question.