What is the “Way of the Cross”?

The Way of the Cross is the path that Jesus took as He made His way to His crucifixion, which some people follow. This might involve an actual outdoor journey. Below is the particular form that is probably the most familiar among Catholics.

Nearly all Catholic churches have "stations" along the walls of the church. There are 14 of these stations, and usually 7 are on each opposing wall. These stations might be paintings, plaques, insets, or in some cases statues. Here is one example: 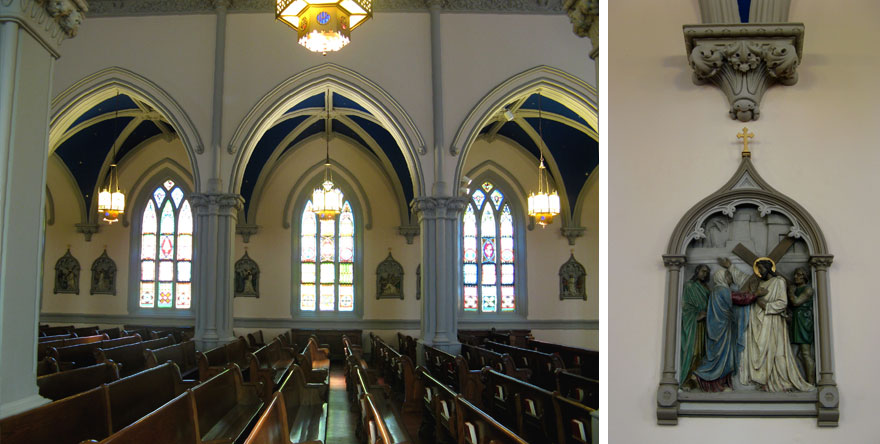 The stations are of course always available, but they are traditionally also done together on Fridays during Lent, especially Good Friday. This is almost certainly what the local church is advertising.

Each of the 14 Stations of the Cross is visited in turn. At each station, an important event in Christ's sorrowful journey is described aloud, and prayers are said aloud, usually of a penitential nature. We usually sing as we move to the next station. There is usually an opening prayer before the Stations, and a closing prayer after. (When a single person or a small group is doing the Stations and others might be disturbed, all of this is done quietly.)

Catholics "do the Stations of the Cross" by gathering together, often after a Mass. Booklets are available in the back. They say an opening prayer, as well as the act of contrition (a prayer for forgiveness). Then, led by the priest, they move from one station to the next, until all 14 stations have been said. When the church has a fair number of people in it, proper movement might be impractical, and people remain at their pews. The priest, altar servers, and some others move from one station to the next. Everyone else 'moves' to the next station by turning to look towards it. At each station, the procession stops, and the station is declared. For example:

The Twelfth Station: Jesus Dies on the Cross

Then the following is said:

Verse: We adore you, O Christ, and we praise you (NOW GENUFLECT)
Response: because by your holy cross you have redeemed the world! (STAND)

Thee/Thy/Thou are sometimes used in place of You/Your. The verse is said by the priest, the response is said by everyone. As the response is said, everyone drops down to their right knee out of respect for God and what He has done for us. This is called genuflecting. After this, there is greater variation in the wording. The general form is another, but this time longer, verse-response prayer. It is usually appropriate to kneel during the longer response (if you are unsure or confused about when you should kneel, you simply follow the priest, because he knows). Here is one example of what would be said at the 12th Station, from St. Alphonsus Liguori's Stations of the Cross:

V: Consider how Your Jesus, after three hours of agony on the cross, is finally overwhelmed with suffering and, abandoning Himself to the weight of His body, bows His head and dies. (KNEEL)

R: My dying Jesus, / I devoutly kiss the cross on which You would die for love of me. / I deserve, because of my sins, to die a terrible death; / but Your death is my hope. / By the merits of Your death, / give me the grace to die embracing Your feet and burning with love of You. / I yield my soul into Your hands. / I love You with my whole heart. / I am sorry that I have offended You. / Never let me offend You again. / Grant that I may love You always; and then do with me as You will.

After this part, everyone says an Our Father, a Hail Mary, and a Glory Be. Then everyone rises and sings three lines of song as the procession moves to the next station. Here is an example:

Let me mingle tears with thee
Mourning Him who mourned for me,
All the days that I may live.

These words vary, but the melody always seems to be the same, and it is very fitting, beautiful, and recognizable. Sometimes a choir sings this, and sometimes there is no chior, so there can be a bit of a pause until (at least in the first few stations) someone works up the courage to be the first one to sing, and by then everyone is already singing together anyway. It seems most appropriate to begin singing when the priest rises or moves, so that he is not moving to the next station in silence.

We do this 14 times, once for each station, and singing as the procession moves to the next. After the last station is said, the priest moves to the front of the church. (I have heard that a fifteenth station is sometimes said there, though I think this is a newer or uncommon practice; I am unsure.) The priest and everyone then say concluding prayers. A Plenary indulgence is granted to those who do this faithfully.

There may be other variations on what is described above. The stations can also be said alone, or in a small group such as with one's family. Sometimes the scenes are reenacted, especially among young people, and these are called the "Living Stations of the Cross".

(One way to tell that it is Lent is to look at the liturgical books in the pews: if they have suddenly become dog-eared, it is Lent. This is due to people standing and kneeling while turned sideways, which causes clothing to catch on the pages of the books. The books can be turned on their sides to prevent damage. Usually it helps to keep the kneeler raised, since kneeling on the kneeler with only one knee while turned can be awkward. Some churches apparently try to get around this issue by exiting the pews, but this can be awkward if there are many people, since kneeling becomes impractical, and the priest must pass through a crowd.)

I can't find videos of particularly large churches saying the Stations, which I suppose makes sense. Here are the videos I could find:

The Way of the Cross, also known as The Stations of the Cross, as advertised by a Church is a formal mini-pilgrimage or "pilgrimage lite" through the "stations" (important moments) of Jesus' passion and death. In modern Catholic Churches there are 14 stations:

Each station is generally represented in the Church by a metal or wooden engraving, a painting, or a stained glass image. The group moves from station to station in order and is lead in prayer and meditation.

Unlike some other Catholic "events", this isn't a sacrament. So, for a mini-mini-pilgrimage, this can be done privately as well, using your own words, reflections, and prayers if you like. Praying "the stations" is recommended by lots of holy folk in particular during lent, but also regularly throughout the year.

The Via Dolorosa is the Way of the Cross or the Way of Grief. Technically, it is the street which Christ walked down as he was led to his crucifixion, but it has come to be associated with a liturgical service that commemorates the event. Like the Passion, it tends to be a solemn service of rememberance commemorated mostly by the more liturgical Christian denominations.

There are several events, some of which are Scriptural, many of which are merely passed down tradition, that occurred along the way. The celebration recounts each of these events, and as the story is told, the participants are called to reflect upon them.

The progression of events begins at the Anatolian Fortress, where Jesus is sentenced to death, and ends at Golgotha, where Christ was crucified and buried. It includes such commenorations as Jesus dropping the cross and falling, having his brow wiped, and being led to the Hill.

Note, as the original city of Jerusalem was destroyed, all recreations of the event are necessarily no longer at their spot - even the one in Jerusalem I did. There are the 15 plaques to be sure, commemorating each stop - but the truth is they are all just reminders of Christ's suffering

Not the answer you're looking for? Browse other questions tagged catholicism or ask your own question.

16
What is the Catholic position on Exodus 20:4?
4
Non-movable feasts in the Lent and Easter seasons
8
How does the feast of Corpus Christi fit into the church calendar?
5
Why keep baptismal fonts full in the Roman Catholic Church?
9
Is secularizing Christian symbols blasphemy?
10
Which liturgical rites (forms of Mass) are presently used in the Roman Catholic Church?
12
At what point did the Roman See start self-identifying as the Catholic Church?
5
At what point did the Eastern Church start self-identifying as the Orthodox Church?
5
What is the relationship between the mass and the cross in precise terms?