What does spikenard have to do with St Joseph?

The coat of arms of Pope Francis includes references to Jesus (the sun with cross, nails, and IHS), Mary (the star) and Joseph (the cluster of flowers). 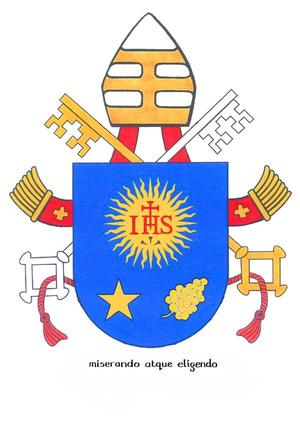 The association of the flowers with St Joseph is described in the press release, linked above:

In the Hispanic iconographic tradition, in fact, St Joseph is depicted with a branch of spikenard in his hand.

I know about the use of (spike)nard in the anointing of Jesus in Matthew 26, Mark 14, and John 12, where it is done by Mary of Bethany, who might be the same as Mary Magdalane (and who is therefore usually depicted with an alabaster jar of nard). I was not aware that Joseph had anything to do with the plant. (At other times, he is shown with a flowering staff, which does not seem to be quite the same thing as just holding the flowers themselves. If the flowering staff story from the Golden Legend turns out to be relevant, that's fine, but I would like to hear about spikenard in particular, not just flowers in general.)

How did spikenard become linked with St Joseph?

Spikenard has nothing in particular to do with Joseph. What is going on, is the following.

There is an apocryphal tradition to do with how Joseph and Mary were married. Variants of the story can be found in the Protoevangelium of James, Gospel of Pseudo-Matthew, Armenian Infancy Gospel, Book of the Nativity of Mary, and History of Joseph the Carpenter; and were repeated in later tradition, most notably the Legenda Aurea of Jacobus de Voragine. Basically, Joseph was chosen out of several candidates by a miraculous sign - a dove flew out of his staff, or possibly landed on his staff, or possibly there was no dove and the staff blossomed.

Lanzi and Lanzi claim a further tradition, where at the beginning of Mary's pregnancy, the devil mocked Joseph, saying that her virginal conception was no more likely than his staff blooming - which it then miraculously did.

The story is very like that of Aaron in Numbers 17, whose rod blossomed with almond flowers as a sign of the divine favour resting upon him. Indeed, some say that Joseph's rod was the very same one. Moreover, because of Aaron, the almond flower (Hebrew shakad) is associated with being a watchful guardian (Hebrew sheked, to be wakeful), which is also reasonable for Joseph. And so he is sometimes shown with almond flowers, specifically. The staff, of course, is a sign of power or authority, in both cases: it is also connected to the royal Davidic lineage.

Alternatively, and perhaps more commonly, the flowers are lilies. These are more naturally Mary's flowers, but it is fine to give them to Joseph as well: they represent purity, virginity, matrimony. Recall that Joseph did not consummate his marriage, nor is he believed to have committed adultery (see Molanus for the belief that Joseph's flowers can be said to signify his continence).

Now, in the cited Hispanic tradition, the flowers have become spikenard and the staff has vanished. If we look at a painting like The Heavenly and Earthly Trinities (c.1675-82, Bartolomé Esteban Murillo) we can appreciate why.

Not the answer you're looking for? Browse other questions tagged saint art joseph-husband-of-mary or ask your own question.

1
Why does Joseph have a staff in nativity scenes?

11
Why does a beheaded saint have the halo above the stump?
14
What happened to Joseph, Jesus' father?
7
What did Mary and Joseph do with the gold, frankincense, and myrrh?
1
Why does Joseph have a staff in nativity scenes?
4
What's the biblical basis that Joseph adopted Jesus?
12
Why do images of saints often depict them with unusual hand gestures?
3
Have any Christian theologians discussed whether Jesus resembled Joseph?
3
Paintings of the Holy Family with a young St. Joseph?
1
Is St. Joseph the greatest saint after the Blessed Virgin Mary?