Was the white smoke ever supposed to be miraculous?

With everybody waiting on a puff of white smoke to eminate from the chimney of the Sistine Chapel, the engineer in me is curious about the mechanics.

I know in modern times that a special additive to the ballots is added to make the white smoke, but I wonder about the origin of this custom. Was there a time when the white smoke was not something that was manually introduced- akin to the Coptic Pope being chosen by a blindfolded boy?

Or, if in fact this always had been an engineered thing, when and why did the custom begin? More importantly, has it always been the same thing added to make white smoke? Who figured out the mechanics of it all?

No, it's never been miraculous.

Paper burns with a light-coloured smoke, so to produce white smoke just the ballot papers are burned. To produce black smoke, it used to be the case that damp straw was added but that was also capable of producing smoke which didn't look black.

AP reports that for the 2005 conclave (which elected Benedict XVI) the Holy See introduced a second stove which produced coloured smoke. The ballot papers were burned, but the colour was chemically produced in order that it was unmistakeable.

Judging by the first emission of black smoke, which was clearly black even in the evening, it would appear that this chemical method is in use for the current conclave too. 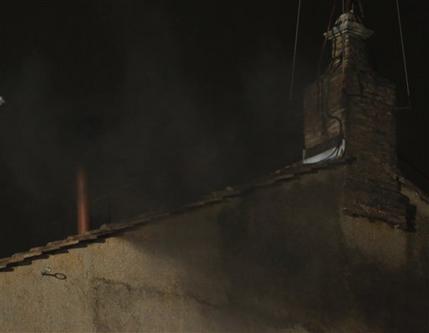 Picture from AP reproduced on The Blaze blog