What are the Twelve Tribes of Israel?

The Bible frequently refers to the twelve tribes of Israel. Which tribes constitute this list? Jacob had twelve sons, but Joseph's two sons each got a land inheritance and Levi got none. So do the twelve tribes refer to those who had territories (thus excluding Levi) or to the sons of Jacob (combining Manasseh and Ephraim)?

Jacob had twelve sons by four women. They are:

Joseph, of course, had two sons - Manasseh and Ephraim.

The tribe of Levi was not given an inheritance, as we see in Joshua 13:14:

But to the tribe of Levi he gave no inheritance, since the offerings made by fire to the LORD, the God of Israel, are their inheritance, as he promised them.

We see the separation of the 'House of Joseph' into the tribes of Ephraim and Manasseh in Joshua 14:4 (and a repetition of the Levite's inheritance)

for the sons of Joseph had become two tribes--Manasseh and Ephraim. The Levites received no share of the land but only towns to live in, with pasturelands for their flocks and herds.

We can read in the rest of Joshua 13 the particular land each tribe was given (note that Manasseh actually became two half-tribes. One half was beyond the Jordan, and eventually disappeared from Israel).

The basis for Ephraim and Manasseh being full tribes is given in Genesis 48:5-6, as Jacob adopts them as if they were his own sons (as Reuben and Simeon):

And now your two sons, Ephraim and Manasseh, who were born to you in the land of Egypt before I came to you in Egypt, are mine; as Reuben and Simeon, they shall be mine. Your offspring whom you beget after them shall be yours; they will be called by the name of their brothers in their inheritance.

So the twelve tribes can be listed as:

We see this listing clearly in Numbers 1, and a final note on the separation of the Levites (v47-49):

The ancestral tribe of the Levites, however, was not counted along with the others. The Lord had said to Moses: “You must not count the tribe of Levi or include them in the census of the other Israelites."

Here is a response to this part of the question:

There shall be twelve stones with names corresponding to the names of the sons of Israel; they shall be like signets, each engraved with its name, for the twelve tribes.

There is no definitive answer as to which exact list of names was inscribed on the stones, and in which order. The Hebrew Bible provides no such list in connection with the stones of the breastplate, and the earliest surviving extra-biblical Jewish writings and commentaries come from a period long after the breastplate was lost. So we have no eyewitness accounts of the names and their order on the breastplate.

However, the dominant tradition among Jewish scholars seems to be that the names inscribed on the stones were those of the original twelve sons of Jacob.

Here is one image from Wikimedia Commons that is also reproduced on various Jewish websites: 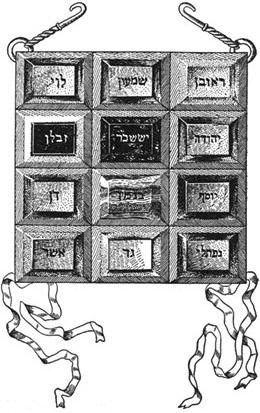 The names and order as they appear on this graphic are:

According to this section of an article from the 1906 Jewish Encyclopedia there are various opinions on the order in which the names were inscribed on the stones. One opinion from an early author is that "the order corresponded to that given in Ex. i. 2-4, except that Zebulun was followed by Dan, not by Benjamin, and that the last two names were Joseph and Benjamin." This rearrangement of the order given in Exodus 1:2-4 (which lists the 11 brothers that went down to Egypt; Joseph, as noted in Exodus 1:5, was already there) would yield this order:

See the above-linked article segment for other opinions.

A fascinating answer to a similar question on the Judaism StackExchange states:

Jacob had twelve sons, and on spiritual matters, we count those twelve. With Levi as one and Joseph as one. (That's for instance what you'd find on the High Priest's decision breastplate.)

On financial/land matters, however, Levi did his own thing, and Joseph got a double portion as his sons Ephraim and Menashe. . . .

The answer does not give a source of this distinction, but it does seem to hold water based on the narrative of the Hebrew Bible and Jewish traditions and scholarship.

NIV refers Manasseh and Ephraim as clans of Joseph. See Joshua 16:1 where the Ephraim families received allotments of Joseph's inheritance. Verse 4 states the distribution is clan by clan. Joshua 17:2 refers to Manasseh clans. They received inheritance due to the blessing of Jacob and his acceptance of them as true grand-sons. This was an honor to Joseph in Gen. 48:5. This blessing is overlooking the boys are not fully Hebrew or of Israel as their mother was Egyptian, Gen. 46:20. Other children of Joseph were excluded from the adoption but received inheritance from their brothers, Gen. 48:6. Confusion enters in Gen. 48:5 where the boys are erroneously equated to Reuben and Simeon. Gen. 49 lists the twelve tribes and does and does not mention Manasseh or Ephraim. Gen. 49:28 states "All these are the twelve tribes..." (NIV). I believe the confusion of tribes is due to choices of the translators in confusing the intent of the text by choosing "tribe" over "clan" or "family".

My other answer to this question focuses specifically on the tribes engraved on the breastplate as mentioned in Exodus 28:21.

This answer is on the more general question of which tribes were on the list of twelve tribes, since with Ephraim and Manasseh, there were thirteen tribes total.

First, the Bible consistently refers to twelve tribes, never thirteen. This has less to do with history than it does with cultural patterns. Here is an explanation from Ancient Jewish History: The Twelve Tribes of Israel at the Jewish Virtual Library:

The number twelve is neither fictitious nor the result of an actual genealogical development in patriarchal history. It is an institutionalized and conventionalized figure which is found among other tribes as well, such as the sons of Ishmael, of Nahor, of Joktan, and Esau. Similar organizational patterns built about groups of twelve, or even six, tribes, are known from Asia Minor, Greece and Italy. . . . [T]here can be little doubt that this pattern of twelve attributed to the Hebrew tribes is very real and historically rooted. Thus, if one tribe were to withdraw from the union or to be absorbed into another, the number twelve would be preserved, either by splitting one of the remaining tribes into two or by accepting a new tribe into the union. For example, when the tribe of Levi is considered among the twelve tribes, the Joseph tribes are counted as one. However, when Levi is not mentioned, the Joseph tribes are counted separately as Manasseh and Ephraim. For the same duodecimal considerations, Simeon is counted as a tribe even after having been absorbed into Judah, and Manasseh even after having split in two, is considered one.

In the Bible narrative this principle can be seen being established in the book of Joshua. In the course of Joshua chapters 13-19, where the tribal inheritances (lands) are delineated, Levi is still referred as a tribe (see Joshua 13:14, 33) along with all of the twelve tribes that received tribal inheritances. But after that point in the Bible narrative, Levi is no longer called "the tribe of Levi" but rather "the Levites."

The one exception to this shows that Levi was still thought of as a tribe. In 1 Chronicles 23, which is inserted into the narrative at the time of David and Solomon, which is well after the tribal inheritances were established, in a genealogy of the Levites it says:

Even though historically there were thirteen tribes due to the split of the tribe of Joseph into two tribes, Ephraim and Manasseh, they were always called twelve tribes, and the various lists generally include twelve names--or if they do include thirteen, Levi is distinguished from the rest.

(Note: the lists below are not exhaustive. For a fuller account of places in the Bible where the tribes are listed, including a visual chart, see: The Twelve Tribes of Israel, by Felix Just, S.J., Ph.D.)

Here are some of lists in the Old Testament in which they are specifically referred to as "tribes." None of them is in birth order:

This does not include lists in the Old Testament where they are not referred to as "tribes" but rather as as "sons" (of Jacob, or Israel), such as:

Finally, here are two listings in the Old Testament that use neither the word "tribe" nor the word "son," though they are clearly referring to the people belonging to each tribe:

As you can see from these examples, though the number associated with the tribes is always twelve, there is much variety in which tribes are included in the list, and especially in the order in which they are listed, throughout the Bible.

Whenever the subject is the tribal inheritances, the list of twelve always excludes Levi and Joseph and includes Ephraim and Manasseh. However, in other contexts, such as blessings, it is common to list the original twelve sons of Jacob, including Levi and Joseph.

Joseph the son of Rachel had 2 sons during Jacob' (Israel) lifetime and in Genesis 48:5 ; 15-16; you will see where he told Joseph that Joseph's two sons were now his (Jacob) two sons making them half and half in the 12 tribes of Israel. Numbers 11-12 tells you the Levites didn't get and land inheritance but they did receive an inheritance. But they and their descendants have towns the Levites will be able to live in but never own. Read these scripture's Genesis 48: 5 ; 15, numbers 3: 5-9 ; numbers 3: 41. Joshua 13:14 tells the Levites inheritance. Hopefully after this everyone will have a better understanding of this.

3
What is the "Israel Mandate"?
9
Does the Bible explain why God chose Israel?
13
Why is the Nation of Israel called Israel and not Abraham?
2
For those who view Israel typologically, what is the significance of the 12 tribes?
0
Topographical Map of Israel / Transjordan?
2
During Assyria’s conquest of Israel, what side did Judah take?