How do the vestments of the pontiff emeritus compare to those of a bishop emeritus?

As widely reported, Pope Benedict XVI will wear "a simple white cassock without the mozzetta" during his retirement, and will no longer use the rest of the traditional pontifical regalia, such as the Ring of the Fisherman.

I was curious about how this compares with the vestments that would typically be worn by a retired bishop - either during Mass, or in everyday life. The loss of the mozzetta apparently represents the fact that Benedict no longer has jurisdiction over the See of Rome (nor the accompanying universal jurisdiction) for example; do other bishops also cease to wear the mozzetta or pellegrina when they retire? What about the crozier, as the former Pope will no longer be using his corresponding papal staff (ferula), or the mitre?

Previous popes who abdicated lived in seclusion (in fact Celestine V was imprisoned) so it's highly unlikely that there will be any useful or easily-available records of what they did. As Benedict XVI has said that he will do likewise, any answer must necessarily speculate. It is possible to draw on general rules, though.

The pope's priestly ordination and episcopal consecration cannot be expunged, so he is entitled to wear clothes and vestments appropriate to clergy of those ranks. Thus he will continue to wear a clerical collar and cassock, and can continue to wear a greco (long coat), tabarro (long outdoor cape) and pellegrino (short shoulder-cape). Normally the greco is white for the pope; his tabarro and pellegrino are red; everything is black for all other clergy. 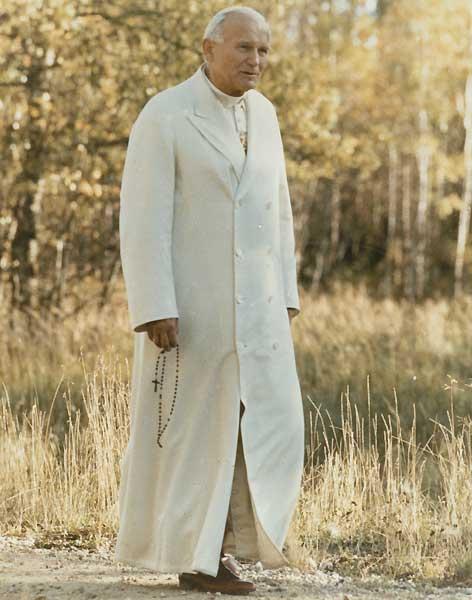 Here's a cardinal in a tabarro and pellegrino (ibid). He's also wearing a black cassock with red buttons and a scarlet cincture. The headgear is called a zucchetto. 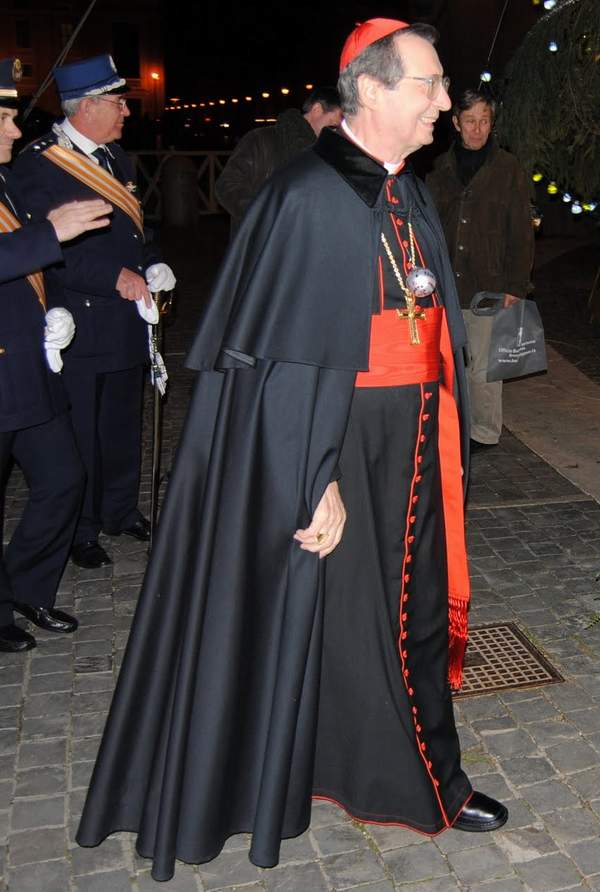 Because the Pope Emeritus remains a bishop, he is entitled to the "pontificals" of a bishop in liturgical celebrations. However he does not have jurisdiction over a diocese, so will not use anything which would indicate that, such as the mozzetta (the short cape which is buttoned at the front); nor will there be a seventh candle on the altar if he is principal celebrant.

Here's a picture of a mozzetta (Dieter Philippi again). The pope's is fur-lined or fur-trimmed; other ranks are simply cloth of the colour of their rank. The difference between a mozzetta and a pellegrino is that a mozzetta is buttoned in front. 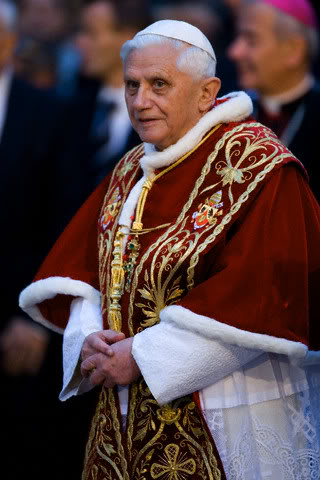 Thus it may be expected that Benedict XVI will continue to wear an amethyst1 ring, and in liturgical celebrations will wear a mitre, pectoral cross and carry a crozier. I would expect that the crozier will be used "facing backwards" — that is, with the hook facing towards himself — as that is the traditional indication that the bearer has no ordinary jurisdiction in the place. The picture reproduced below shows a bishop wearing a mitre (the hat) with a pectoral cross (on his chest) and carrying a crozier in the manner of a bishop without jurisdiction. 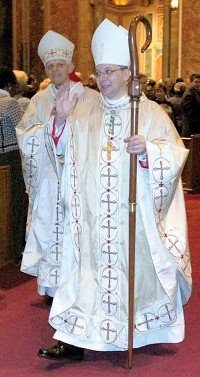 1 Bishops wear an amethyst ring, and purple cinctures, because amethyst in Greek means "I am not drunk". It's a reference to Acts 2:15.

In recent articles and photographs, Pope Benedict has stopped wearing the shoulder cape and the cincture. He continues to wear the watered silk cassock of the papacy and wears a simple gold ring baring the seal of the papacy (not his seal nor that of Pope Francis) just a seal of the office. He is now wearing simple brown walking shoes (no longer the red slippers) and because he has not celebrated a mass publically and will not until April 2014 as the Con-celebrant of the canonization alongside Pope Benedict he has yet to carry a crozier. However, his place as Pope Emeritus I would doubt Pope Francis would have him use a simple crook.

Not the answer you're looking for? Browse other questions tagged catholicism papacy vestments bishops .

11
Where can I find sources showing ecclesiastical vestments of the 1200s?
9
What exactly did Pope Gregory the Great mean by "Universal Bishop?"
4
Why have a photo of the bishop in the sacristy?
3
What is the origin of the cope?
5
Is the Pope Emeritus infallible?
-1
Did the Apollo 11 mission result in a Catholic "bishop of the moon"?
2
Does Catholic Church acknowledge St. Paul the Apostle as consecrated Bishop during Apostolic times?