Ask Question
Asked 8 years, 10 months ago
Active 8 years, 2 months ago
Viewed 3k times
0
As it currently stands, this question is not a good fit for our Q&A format. We expect answers to be supported by facts, references, or expertise, but this question will likely solicit debate, arguments, polling, or extended discussion. If you feel that this question can be improved and possibly reopened, visit the help center for guidance.
Closed 8 years ago.

It is very frequent to see idols of Jesus or any biblical entities in a Church , So is such idolatry allowed by the bible,considering the following verses?

"You must not make for yourself an idol of any kind or an image of anything in the heavens or on the earth or in the sea". Exodus 20:4

History tells us that:

sometimes objects that God instructed to be made were turned into idols by the Israelites. The Book of Numbers contains a narrative in which God instructed Moses to make a bronze snake as part of addressing a plague of venomous snakes that had broken out among the Israelites as a punishment for sin. The bronze snake is mentioned again in 2 Kings 18; however, rather than remaining a memorial of God's providence, it became an idol that the people named and worshiped. Thus the bronze snake was destroyed in King Hezekiah's reforms.

More specifically in India I see Christians carry idols of Jesus and other biblical entities with them kiss them and revere them too. Infact they allow the Hindus in the Church and let them perform worship in their way(Like putting incense sticks, offering flowers , foodstuff to the Idol of Jesus etc) as shown below a very common view in India. I studied in a Christian school for 10 years and i am yet to see Christians not doing these things.

I have seen the same on TV and in videos of people venerating the Idol of biblical entities. 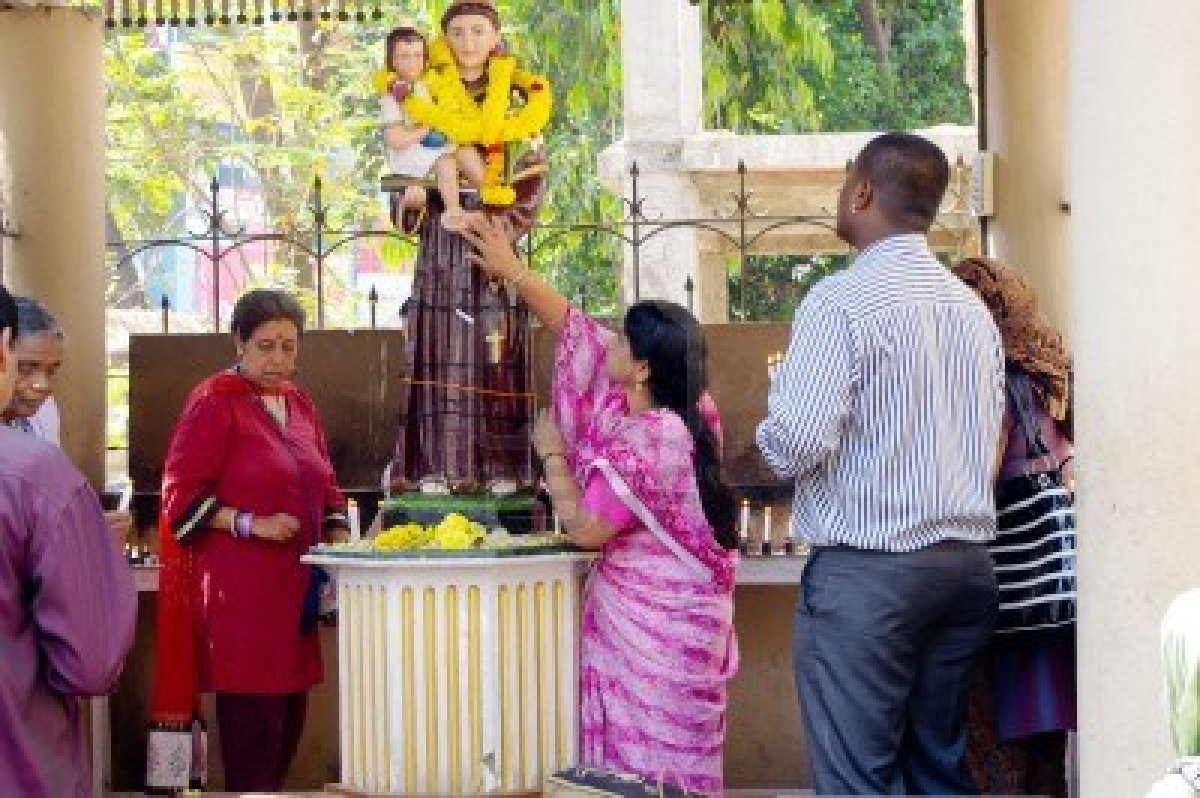 You're operating under a misconception that these are idols. Most Christians don't worship these images, statues, etc. Instead, they are considered art, something that we create because we love the subject, not the work of art.

Asking your question is like asking if looking at a painting of my wife means that I am allowed to cheat on her by devoting my affection to an image of her. I love her, not the painting of her. Christians love Jesus, not the statues of Him.

So, the answer id no, idolatry isn't allowed in Churches.

Addressing the updates to the question, the things that people are "venerating" are likely "Sacrementals".

Sacramentals are material objects, things or actions (sacramentalia) set apart or blessed by the Roman and Eastern Catholic Churches, the Eastern and Oriental Orthodox Churches, the Church of the East, the Anglican Churches, the Independent and Old Catholic Churches, and the Lutheran Churches to manifest the respect due to the sacraments, and so to excite good thoughts and to increase devotion, and through these movements of the heart to remit venial sin, according to the Council of Trent (Session XXII, 15).

In Roman Catholicism, sacramentals such as Holy water, the crucifix or the Saint Benedict Medal are recommended as a means of protection against evil.

Again, the devotion is not to these things, but to the God they represent. There are, those that do worship them like idols, and many view the idea that these could protect us from evil as superstitious, the point remains that officially, these aren't idols. They aren't to be worshiped. They are reminders of the one we should be worshiping.

The whole iconoclastic controversy has raged for thousands of years. In a nutshell, iconoclasts are taking your position, whereas iconodules maintain the position that what Christians do is venerate not worship these images. Muslims obviously are strict iconoclasts, and thus reject any depiction whatsoever.

Over the centuries, Christian thought has alternated on what artistic representations are. When Cromwell took Power in the 1650s, for example, they went all Iconoclast and started smashing all the icons they could find, not altogether unlike the rebels in Mali or the Taliban in Afghanistan who blew up the Bamuyan Buddhas.

The Seventh Ecumenical Council in particular weighed in on this, however, declaring that representations of Christ do not infringe on the person of Christ and are thus not idols. Unlike Hinduism where there is a spectrum of attitude towards what one is doing with, say, a lingam, there is official ruling, accepted by "all" of the worlds Christians (at least by Catholics, Protestants and orthodox ) that declares this is veneration and not Latreia.

Concerning the charge of idolatry: Icons are not idols but symbols, therefore when an Orthodox venerates an icon, he is not guilty of idolatry. He is not worshipping the symbol, but merely venerating it. Such veneration is not directed toward wood, or paint or stone, but towards the person depicted. Therefore relative honor is shown to material objects, but worship is due to God alone.

Does actual practice sometimes get this wrong? Sure. The nature of syncretism is such that in some cultures, practices bleed across beliefs. Offering incense, devotion, and performing rites that look like idol. Worship is not surprising in a culture where the majority pursues it. Doesn't mean it's orthodox in any event.

One could look at the perversion of Jihad and say, "Muslims are all suicide bombers, " too- but many don't because we can distinguish between orthodoxic pronouncement and individual (mis)practice. You would do well to consider the same.

It is right to warn people against the sin of idolatry when they are committing it. But calling Christians idolaters because they have images of Christ and the saints is based on misunderstanding or ignorance of what Bible says about the purpose and uses(both good and bad) of statues.

Idolatry is forbidden in Bible in verses Ex. 20:4-5 and Ex.32:3. God forbad the worship of statues, but he did not forbid the religious use of statues.

The use of objects for religious purpose is commanded by God as in Ex. 25:18-19:

Similar commands are also at 1Chr.28:18-19 and Ezekiel 41:17-18. In Num.21:8-9 God told Moses to make [a statue of] a fiery serpent, and set it on a pole; and everyone who is bitten, when he sees it, shall live.’ So Moses made a bronze serpent, and set it on a pole; and if serpent bit any man, he would look at the bronze serpent and live. One had to look at the bronze statue of the serpent to be healed, which shows that statues could be used ritually, not merely as religious decorations.

So God does not forbid the ritual use of religious images. the statues, paintings and other relics are mediums to recall the person or thing depicted and it helps to recall the life and examples of saints by looking at their pictures.

All the three Abrahamic religions one way or the other use these mediums to strengthen their faith in one almighty God without breaking any of the command given by Him. As a corollary in other major Abrahamic religion i.e. Islam where it is strongly opposed to use of statues and pictures of Mohammed, it is an accepted practice to pray at Tombs of the saints (Pirs). Other acts like the use of pictures of religious shrines like Mecca and Rock of Dome is not at all considered as idolatry. Use of Moon and Star as a symbol of Islam and as also no:786 is very common in Islam. Even the veneration of printed verses from Koran is a common feature in Islamic faith. Many would also categorise the black stone in kaaba as the idol worship very much akin to Shiv lingam of Hinduism but it not taken as idol at all.

It is when people begin to adore a statue or any of these mediums as god that the Lord becomes angry. Thus when people did start to worship the bronze serpent as a snake-god(whom they named “Nehushtan”), the righteous King Hezekiah had it destroyed (2Kings 18:4)

Not the answer you're looking for? Browse other questions tagged idolatry christianity-in-india .

1
About statues and pictures
19
What is the difference between icons and idols in churches that permit icons?
4
What is the basis of the non catholic denominations to hold catholics as Idolaters
2
How do Catholics answer the question of idol worship within the faith?
10
Why do Syrian Orthodox churches use only paintings and not sculptures, unlike Catholic churches?
0
How does the "church" reconcile breaking the 2nd commandments religiously?

5
What do churches that prohibit the use of icons think an idol is?
6
How does Christianity define idolatry?
8
Commandment about idols and idolatry in OT
11
What is the Biblical basis for idolatry being "things" we put higher than God?
2
Does St. Thomas Aquinas think idolatry is the main cause of homosexuality?
4
Where does Calmet write when idolatry began?