What is the “city of seven hills” in St. Malachy's Popes Prophecy?

Peter the Roman, who will nourish the sheep in many tribulations; when they are finished, the city of seven hills will be destroyed, and the dreadful judge will judge his people

I have been searching the internet for some time now but I have not found any clue. What does the city of seven hills refer to?

The Latin phrase civitas septicollis, or "seven-hilled city," is an allusion to Rome. According to Joseph Lomas Towers in his Elucidiations of Prophecy, Ch. XIII, p. 199,

Rome was as well known by its situation on seven hills or montes, as by the name of Rome itself; Urbs septicollis was never mistaken for any other city, Roman authors have so fully determined the sense of it.

The seven hills are: 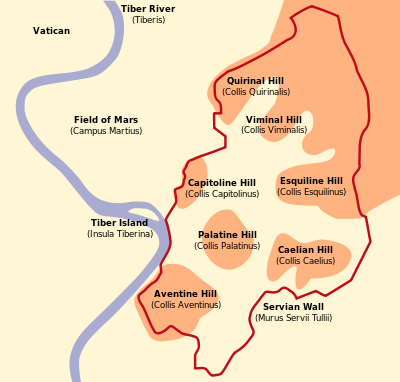 "The Seven Hills of Rome (Italian: Sette colli di Roma) east of the river Tiber form the geographical heart of Rome, within the walls of the ancient city."

In his Carmen Sæculare, the Roman poet Horace wrote,

When Sybilline verses have issued their warning
To innocent boys, and the virgins we’ve chosen,
To sing out their song to the gods, who have shown their
Love for the Seven Hills (septem...colles).
O kindly Sun, in your shining chariot, who
Herald the day, then hide it, to be born again
New yet the same, you will never know anything
Mightier than Rome!

Christopher Wordsworth, in his Union with Rome, Ch. I, pp. 3-4, also lists several other Roman authors who refer to Rome in a similar manner.

On another note, I was examining the Latin which states,

Therefore, this Peter the Roman may not be the one "feeding" or nourishing the sheep, but the one persecuting the sheep. Just something to consider.

The problem with prophecies in general is that it is almost impossible to know the correct interpretation(s) to them until the actual time of fulfillment is upon us. The Prophecies of the Popes is no exception.

The original Latin text of this particular prophecy does not name the city of Rome as being the city of seven hills. Its interpretation as to which city is the actual one is still an open question.

Nevertheless it is almost safe to believe that it may be one of the three following seven-hilled cities: Rome, Constantinople (Istanbul) or Jerusalem. Given the very eschatological nature of this prophecy, Jerusalem could very well be the city in question.

Bamberg Bavaria, what better area than in the central part of Europe, Bamberg is also known as the Franconian Rome. It sits on 7 hills with a church on each hill. In order to control the world a better place could not be found. There is even speculation that the Antichrist will come from Germany.

Not the answer you're looking for? Browse other questions tagged eschatology prophecy papacy medieval-church malachy or ask your own question.

1
In a Catholic viewpoint, is it possible for Rome to fall?
-1
Why is Rome referred to as Babylon in Rev 17 and 18?

7
What are the different views regarding the order of events for end-times prophecy?
4
The Fig Tree of Matthew 24 and prophecy
8
What is the status of St Malachy's prophecy within Catholicism?
16
What Popes have resigned in the past?
6
What happens to retired Popes like Pope Benedict?
14
Were the medieval popes examined on a toilet-lid-like chair to establish their masculinity?
15
On what basis do Popes choose their papal name?
2
Popes' Coat of Arms and Saint Malachy Prophecy of the Popes