What Popes have resigned in the past?

Pope Benedict XVI recently announced his resignation. What other Popes have abdicated in the past? The media keep pointing to Gregory XII, but it is my understanding that he was deposed by the Council of Constance (involuntarily).

Gregory XII resigned by proxy at the Council of Constance. He had appointed Cardinal Giovanni Dominici of Ragusa and Carlo Malatesta to represent him, and Malatesta announced the resignation which was accepted by the Council. That Council deposed Antipope John XXIII and excommunicated Antipope Benedict XIII. Gregory's resignation was necessary to end the Western Schism, and was probably at the request of the Council. However, he was not deposed by the Council of Constance.

Martin V was consecrated Pope a month or so after the death of Gregory XII, who lived two years after his abdication. The sede vacante period was quite lengthy.

Pope Celestine V ruled that a pope had the right to resign the papacy, and he did so after only seven months in office in 1294. In the early church, Pope Pontian resigned in 235 after being exiled to the salt mines of Sardinia. Other popes who abdicated are John XVIII in 1009 and Benedict IX in 1045, together with Benedict XVI in 2013.

In addition to the above, the Catholic Encyclopedia also lists Pope Gregory VI who was held to have procured Benedict IX's resignation and was persuaded to resign to avoid accusations of simony.

There are also the doubtful cases of Marcellinus and Liberius; and the non-resignation of Pius VII — he had signed a deed of resignation which would only take effect if he were to be imprisoned in France during his trip there for the coronation of Napoleon in 1804.

Pope Benedict XVI visited the tomb of Pope St Celestine V in 2009, laying his pallium on it and pausing for devotion. He visited again in 2011. 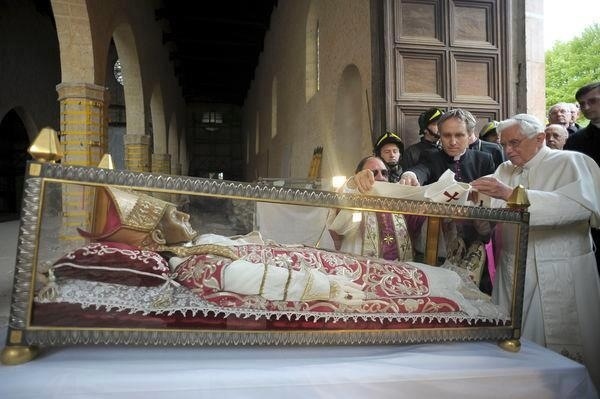 9
The Pope is resigning. How does a living pope confer his authority?

8
How do the vestments of the pontiff emeritus compare to those of a bishop emeritus?
6
What happens to retired Popes like Pope Benedict?
5
What personal possessions did Pope John Paul II have at the time of death?
8
For Catholics who have expressed concern about Pope Francis and are wary of his pontificate, what are the key issues?
8
Were any popes or patriarchs converts to Christianity?
3
What does “he finds his truth” mean in Pope Benedict's Caritas in Veritate?
6
Pope Benedict XVI and Pope Francis and the Prophecy of the Popes
7
When and how can a pope revoke the decrees of an ecumenical council?
5
What does it mean when Archbishop Ganswein stated that Pope Benedict XVI expanded the Petrine Ministry?