Format for the Catholic Mass

I've been to a Catholic Church very few times in my adult life. It's a very different experience than the protestant Churches I'm used to.

In most of the Protestant Churches, there is generally a time of singing/praise/worship, followed by some general announcements for members (The Lady's Missionary meeting will be meeting on Monday night at Liz's house, for example), followed by a prayer, then a sermon on a particular topic, more singing, and a prayer. In most Baptist Churches, there's an altar call just before the final prayer.

The Catholic Church also seems to have a very set format, and it doesn't seem to vary much, but that's probably an outsider's perception. I'm interested to know what the standard format it, and also, what things are the same every week, and were there is variation.

To give an example, in all the activities in the Protestant Churches I described, each and every one of those activities vary. The sermon is different every week. The Hymns vary (in our Church they are chosen because the doctrine in the Hymn is directly relevant to the sermon message) The format stays the same, but the contents seem different.

In the Catholic Church, however, it seems to be much less flexible. I do not mean this to be disrespectful, but it seems that everyone knows when to stand, when to kneel, when to sit, and there's usually a time when the Priest says one thing and everyone else responds in unison. ("Peace be with you" - "and also with you" being the easiest to remember.) I get the impression that this part of the service is the same week after week.

Even better would be each item listed with the correct Catholic terminology with a layman's or potestnt synonym... Like

Or if I'm just perceiving things incorrectly, correct my misunderstanding.

I think you're looking for the Order of Mass

But in General, each Catholic Mass is broken up into 4 parts (It's a little different for Sundays and the few Holy Days of Obligation than it is for weekday Masses; more things are optional for weekday Mass)

I got this manual from my sibling's homework for their subject, Christian Living Formation. Hope this helps. 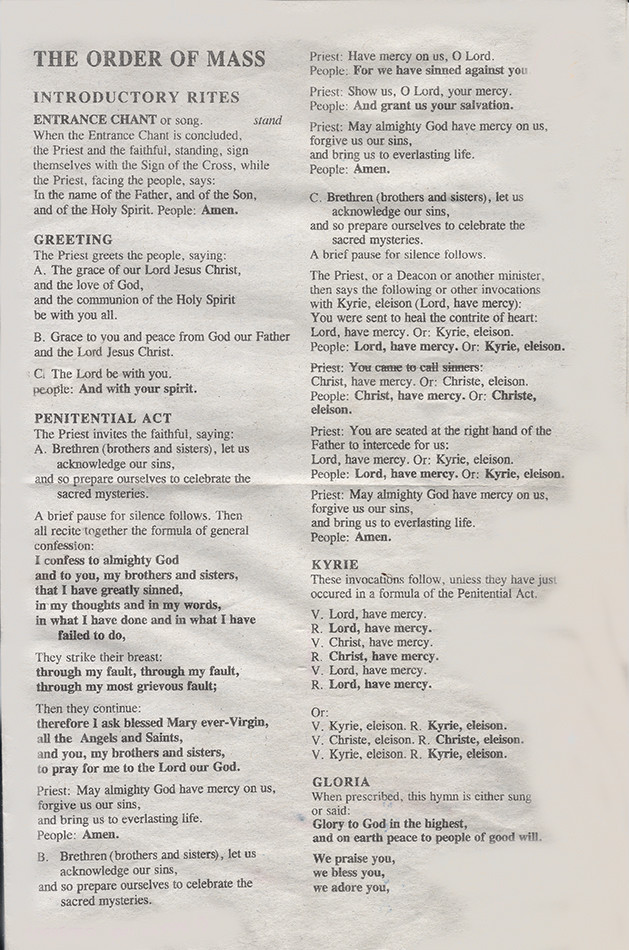 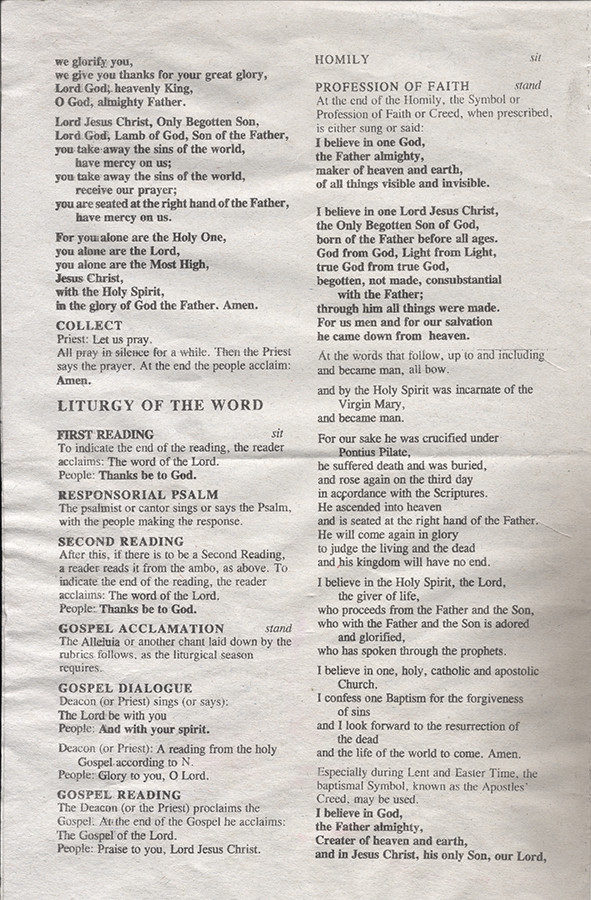 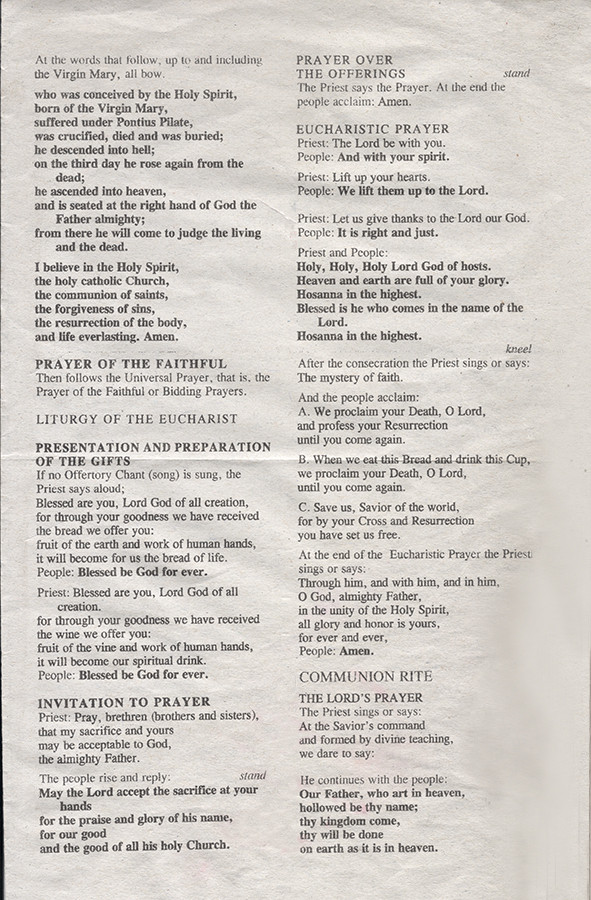 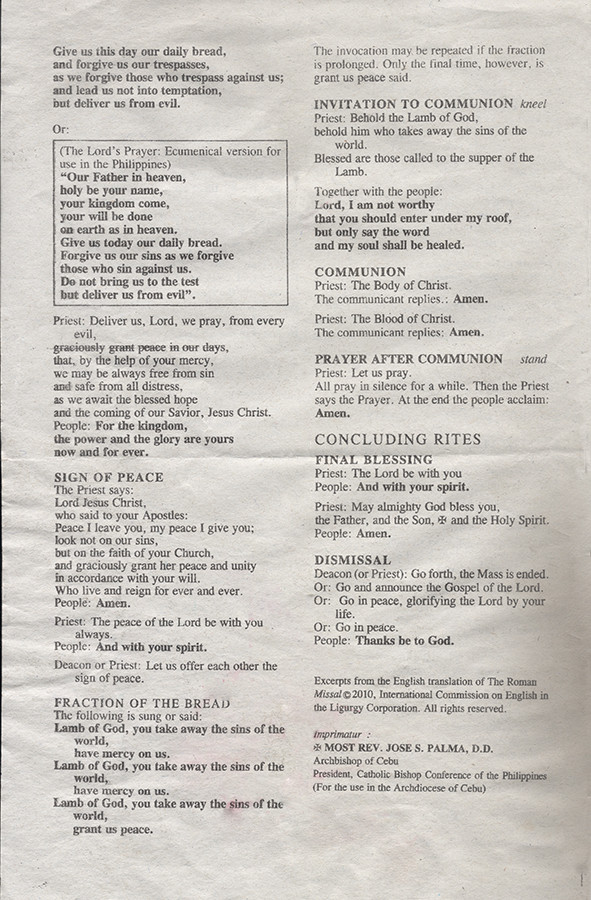 To supplement the other two fine responses, I'd like to point out another general distinction. The texts prayed at every Catholic mass fall into one of two categories:

Mass Ordinary: This set of texts remains more or less fixed from day to day, with some variation based on the season or the day's liturgical rank1 -- for example the Gloria is omitted in Lent and Advent, the second reading and Creed are generally omitted on weekdays, etc. Peter's answer outlines its structure.

Mass Propers: These texts vary from day to day. and can themselves be divided into three categories:

1Every day of the year has a liturgical rank, which ranges from Easter at the top to an ordinary summer weekday at the bottom, with saints' feast days somewhere in between depending on a number of factors.

Obviously this is a late answer, but a couple of things should be noted:

Generally mass is celebrated in a Catholic church every day, if a priest is available.

Attendance at mass is required for Catholics on every Sunday, and Holy Day of Obligation (which vary by country), as previously answered. However, notwithstanding several important points, participation in the Eucharist (communion) is only required once a year.

The order of mass is specified by the pope. It is specified in the "General Instructions of the Roman Missal". A great deal of the structure, form, and specific words to be used are strictly prescribed. Some songs, and some customs are up to regional and local variation. To be exhaustive, there are also other authorized rites that are somewhat different, particularly the traditional Latin mass. But generally, the mass is the same everywhere, and one should be able to follow along even if it's in a different language.

To get back to the start of the question: yes, a Catholic mass is very different, and that's because protestants have decided that they have 20,000 better ways of worshiping God than the Church does.

Not the answer you're looking for? Browse other questions tagged catholicism mass .

6
What is the Catholic position on ethnic parishes today?
4
What theological statement would be made if the Creeds preceded the homily?
18
What should I expect at a Roman Catholic funeral?
8
What is the theological justification for only the priest drinking the wine in a Catholic Mass?
5
Do Orthodox churches offer daily Mass?
3
Is every single minute of the year a mass being celebrated in the Roman Catholic Church? If so, since when?
3
How much of the Catholic Mass is inherited from the Jewish Shabbat service?
4
Why would a Spanish Catholic priest disapprove of German Catholic texts for Gloria and Sanctus?
2
In light of the many changes in regulations, what is the purpose of the Roman Catholic altar and is it neccessary for a valid Mass?
3
What is the nature and format of a Lenten Penitential Service in the Catholic Church?