What color was Augustine's skin?

Ok, let me start by saying I don't think more or less of a person because of the color of their skin. I consider racism to be both misguided and a sin. But, when I visualize a person, I like to think of them in ways that at least approximate their actual appearance.

I am skimming some works of that greatest of the Patristics - Augustine of Hippo, later the Bishop of Milan (in Italy), but hailing from what is today, Tunisia. He wrote the City of God and the Confessions - two classics still studied more than 1500 years after their creation.

And, as I consider the young Augustine of Hippo - a region of northern Africa, nowadays near the Algerian / Tunisian border - I have this image of a white guy in my head.

That said, he was from Africa. And indeed, this seems wholly legitimate as well.

And, then I remember, the Arab Invasions that went alongside the rise of Islam also changed the area as well.

So, it's a simple question - Was Augustine white or black? Many of the Church Fathers from Alexandria to Carthage would have probably shared this legacy, and I'm just sort of curious - What did they look like?

He's the product of Patricius and St. Monica.

Augustine's mother's name, Monica, is Berber ... the names Monnica and Nonnica are found on tombstones in the Libyan language - as such Monnica is the only Berber name commonly used in English

From Wikipedia citation of Michael Brett and Elizabeth Fentress, The Berbers, Wiley-Blackwell, 1997, p.71, 293

Patricius probably was a Curiale and he was definitely a pagan of the Roman sort, not the tribal African sort.

So, my money is that he looked like his mom, who according to scant evidence was a Berber, like these people: 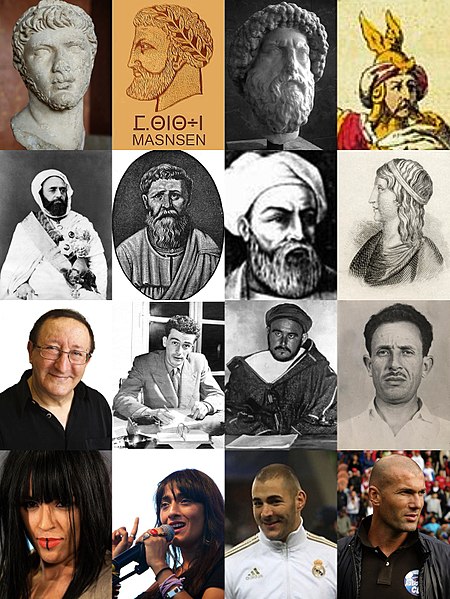 Gerald Bonner, in Augustine of Hippo (page 36), says, "There is no reason to suppose that he was of any but Berber stock."

Mark Ellingsen writes in The Richness of Augustine (page 7) that there were three main ethnic groups in the region of Augustine's birthplace:

Three significant ethnic groups populated the region: Italian immigrants; Children of Phoenician immigrants (called Punics), who had lived in the region for nearly eight centuries; and Berbers of the Kabyle clan, indigenous Africans who in that era in this region (modern-day Algeria) prior to the Islamic invasions of subsequent intermarriage were (and continued to be) Black.

Ellingsen identifies Augustine as a Berber on the force of his mother's name, his son's name (naming one's firstborn "Godsend" was a Berber tradition), and the fact that he expressly identifies himself as "Punic" (in a generic sense, as Ellingsen demonstrates) or "African" quite often in his writings. Ellingsen seems convinced that Berbers of the time were dark-skinned.

John K. Ryan, in introducing his edition of The Confessions of Saint Augustine (page xix), agrees that Augustine was a Berber but believes that that means he was light-skinned:

The native inhabitants of the region belonged to a race that was perhaps European in origin. Typically, its members were fair-skinned, with brown or yellow hair, and blue eyes. Called Afri (Africans) by the Romans, or more restrictedly, from geographical and other considerations, Mauri (Moors), Libyans, and Getulians, some of them at least were also called barbari, or near barbarians, by the Romans. It is from this fact that their descendants, the modern Berbers of northern Africa, derive their name. ... The weight of the evidence is that Augustine belonged to this native north African stock.

It's probably impossible to know for sure what his skin color was, largely for the reasons identified in the question body. But it does seem clear that he was of Berber stock and that he closely identified with being a native of the African continent.

It is my understanding that "Black Africans" are sub-saharan in origin. See: Bantu Migration Theory. Look at the appearances of ancient Egyptians and whatnot. They were not black --- they considered blacks from Nubia, the country to the south of them corresponding to the far southern Nile between Egypt and Ethiopia, to be foreigners. Carthaginians were not black. There is a running argument on the internet about the ethnicity of the Moors, as well - but Moor in Medieval European jargon just meant 'Muslim from Africa whose not an Arab', essentially. Many sub-saharan Africans (black africans) are integrated into the Moor / Berber / Tuareg population. But for the most part, everybody from the Numidians to the Carthaginians to the Egyptians are depicted in ancient art as olive-skinned or otherwise tanned.

Look at contemporary depictions of generic Ancient North Africans. The majority of them are neither black nor white but somewhere in between, Mediterranean people like the Phoenicans or the Romans themselves, even. The truth is that most of these societies were not nearly so homogeneous as we seem to think --- heterogeneous societies are not a modern phenomenon. Romans themselves ran the gamut of pale to swarthy, though less so than the North Africans. There was a Roman semperor - Vitellius - who ruled in AD 69 with red hair. As was the hair of Ramses II. So saying that Augustine was a Berber therefore he is black or white is difficult --- the preponderance of people in his homeland were not black, nor white in the European sense, but there would've been minorities of both as well. In conclusion, the idea that ancient North Africans, Berbers or Carthaginians or otherwise, are "black" is not supported by their culture or language or contemporary depictions. If anything, North Africans are the descendants of migrants from Asia, not Europe or sub-Saharan Africa.

I think you can safely picture Augustine as a dark-skinned, dark-haired man who would have had a decidedly foreign look on the streets of Rome or the camp of Shaka Zulu. Similar to North African's current inhabitants by accident, though genetically quite different.

Actually, as per Wikipedia (http://en.wikipedia.org/wiki/Augustine_of_Hippo), both parents, Monica and Patricius, were North African Berbers, the former being a Berber Christian, the latter being a citizen of Rome and whose family was classed as belonging to the plebeian clan (http://en.wikipedia.org/wiki/Aurelia_%28gens%29). According to this Patricius was a Roman in the sense that he was a citizen of Rome, though ethnically speaking he was a Berber.

Saint Augustine confesses in many of his homilies that he was a sexually-charged youth espousing socially deleterious political philosophies before his conversion; what mattered was not skin tone but scholastic achievement and adherence to the then-current, fanciful, anti-Catholic, political philosophies in Rome. Augustine also was noted for the difference in his skin coloration (Black) by his Roman peers with whom he was openly, fiercely promiscuous and with whom he was strongly part of that day's youthful student intelligentsia.

Augustine's skin color was a problem for some in Europe; the problem was that he did not blend with the hoi polloi in the locale and was even ridiculed and stigmatized for his darker skin by some residents where he studied. Augustine paid no attention to the ethnocentric racism he experienced as a student during those Roman times because his sexual drive eclipsed the paltry arguments for a comfortable phenotypical blend among the general population. Augustine's darker skin coloration became a scapegoat problem when authorities discovered that he molested a young girl who later became pregnant with their child.

At this time, his mother, Monica was known to have prayed for twenty years for her son, Augustine, who she loved very much, that he may be converted from his excessive hedonism and his repugnant political philosophies. As she died, Augustine converted back to Catholicism. The girl who Augustine molested became a nun; their child became a religious as well.

Augustine refers to himself many times being African with dark skin in his homilies as bishop. On the current understanding of Augustine, much has been ascertained that Augustine was Black (by the racially-charged vernacular of today). The term, "Black" is an Anglicized expression of the Portuguese-Spanish term, "Negro."

Moreover, the Roman Catholic Church already had two Black African popes who were later sainted, so understanding that Augustine was "Black" was not hard to fathom as he was from Africa as well. But for sure, Augustine gave his own accounts, making his own testimony as a primary source, that he was an African with way way darker skin than most European Romans. As some spinmeisters try to Whitewash Augustine in order to align his stellar philosophies with a European phenotype, Augustine gives first-hand accounts dealing with nebulous racism, again, during his younger, much more wilder, days. Thagaste today is still "Black". While not everyone in Africa is "Black," the Muslim conquest in the early centuries circa 7 AD were predominantly at the hands of black West Africans who adopted the Islamic faith and spread it across three African empires.

Bottom line, any argument for Berber-ethnicity may be more European aspirational than actual: Augustine of Hippo was Black. God does not see color, so "race" does not matter in Christendom-- only love of God and of neighbor matter as Jesus welcomes the sheep into the home of His Father for their LOVE not their hospitality toward a preferred race. #AugustineIsBlack