As the title asks: What is the significance of this particular haircut (the tonsure), why is it associated with monks and what is the history behind it? 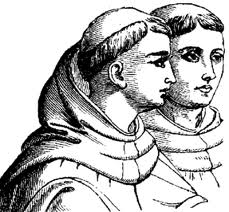 Both men and women traditionally had their hair cut or removed in specific ways when they entered a monastery or convent. These haircuts symbolized religious devotion, group identity, and humility as well as the renunciation of worldly things and personal vanity. The practice may relate to ancient rites in which people in various cultures offered their hair as a religious sacrifice. Monks and nuns also take a vow of celibacy, and hair has historically been associated with eroticism and sexuality and as a means to attract the opposite sex.

Historians say that monastic hairstyles also may relate to the ancient custom of shaving the heads of male slaves. Some early monks who began shaving their heads voluntarily referred to themselves as "slaves of Christ." Such hairstyles thus would show that a person entering religious life intends to subordinate his own will to the will of God.

Groups of Christian men began to form organized religious communities during the second and third centuries. These men, who became known as monk, lived apart from other people and developed distinctive modes of dress and appearance. Some monks cut their hair short, while others shaved it off completely or shaved part of their head.

Partial shaving may have its origins in ancient Egypt, Greece, and other places where men shaved a circular bald spot on top of their heads to honor the sun god. Some orders of monks who left a narrow crown of hair around their heads said that this signified the crown of thorns placed on Christ's head during his crucifixion.

The distinctive style, which is called the tonsure (from the Latin word tondere—"to shear"), often is associated with Catholic monks. Historians are unsure about the earliest origins of the tonsure, but church officials came to accept it and then required that all Catholic monks adopt this hairstyle. The tonsure is "a sacred rite . . . by which a baptized and confirmed Christian is received into the clerical order by a shearing of his hair" (The Catholic Encyclopedia).

In Roman Catholic monasteries, novices who had just entered the community had their hair cut short with scissors. When the novice took his vows to become a monk, he received the tonsure. The hair was cut short and then the hair on top of the head was shaved off, leaving a round bald area on the crown. These haircuts were carried out as part of the initiation into the group and were maintained by monastic barbers.

Three main variations of the tonsure developed among various orders. The eastern style involved shaving the head completely, according to a style attributed to St. Paul, while others shaved just the crown, a style associated with St. Peter and known as the Roman tonsure. A third style, called the Celtic (or transverse tonsure or tonsure of St. John) evolved in the British Isles. Celtic monks shaved the front part of their head from ear to ear but left the hair in the back hanging longer. Some Celtic monks pulled that hair around to form a semi-circle from one ear to the other. [...]

The monastic tonsure was a way to show one’s consecration to God. The act of shaving one’s hair on the scalp is known as tonsure and it has been associated with a multitude of religions through history. One theory is that it can be traced back to Jesus’s disciples, who practiced the art of tonsure on their own hair, which monks wish to imitate. Another idea concerning monks being the disciples of God is the ancient custom of shaving the heads of male slaves. Male monks then shaved their heads in kind to indicate their status as “slaves of Christ.” The narrow crown of hair also evokes images of the crown of thrones placed on Christ during his crucifixion.

The ecclesiastical tonsure is the shaved part of the head, and this practice of shaving the whole or part of the hair was from very early times a necessary preliminary to the monastic life of holy orders. The tonsure is, of course, much older than this, for Egyptian priests shaved their heads: it is probably from them that the first Christian monks derived the practice. In the fifth century the clergy copied the monks. The shaving or clipping of the head was done in three different ways. They are as follows: The Roman. The head was shaved on the top, leaving a circle of hair to grow round it like a “crown surrounding the head of a king, or in a symbolical sense resembling the Crown of Thorns encircling the Head of Christ.”

“This coronal tonsure is also known as the tonsure of St. Peter, Fig. 253, and was in use in the early churches of Britain, Italy, Spain, and Gaul.”

“The Eastern or Greek tonsure had the head completely shaved, and is referred to as the tonsure of St. Paul.

The Celtic tonsure, worn in the early Scottish churches of Great Britain and Ireland, was made by shaving the head in front of a line drawn from ear to ear over the top of the head, and is called the tonsure of St. James, Fig. 254. The tonsure was prescribed by canon law in very early Christian times: it was imperative for all clerics to be tonsured, and this was very solemnly done before ordination by a bishop in the case of the clergy, an abbot performing the same ceremony for a monk entering a monastery.

The ceremony of tonsuring for the reception of the minor and major orders appears to have been much the same as at the present day: the bishop or other prelate clips the hair in front, behind, over each ear, and on the crown of the head of the candidate kneeling before him, and “then invests him with a surplice. Until this was accomphshed a layman could not be admitted to the clerical state.

These regulations concerning the hair of the clergy were inspired by the abhorrence of the prelates of the Church for the long hair so prevalent among fashionable men at various periods. Special injunctions forbade long hair to be worn by any officers of the Church: this is also St. Paul’s opinion (1 Corinthians xi. 14).”

Not the answer you're looking for? Browse other questions tagged tradition religious-practice monasticism .

6
How is the feet-washing ritual observed during Lent?
17
Why don't Protestants engage in monasticism?
5
What is the origin of hands lifting in worship?
6
Why did Augustine attempt to stop Christians from walking barefoot?
5
What part do Monks play in the Christian church?
4
Who were the Black Canons on the Augustinian Priory of Inchmahome in Scotland?
4
Why did Joseph and Mary take one day's time to realize that Jesus had been left behind at the Temple?
0
What is the history behind the tradition of making the sign of the cross?
5
Intellectual work of monks as a way to getting closer to God by understanding better His creation?