Consequently, when Christ came into the world, he said, “Sacrifices and offerings you have not desired, but a body have you prepared for me;

This is an apparent reference to Psalm 40:6:

In sacrifice and offering you have not delighted, but you have given me an open ear.

The footnote in my Bible on the Psalm mentions that literally this verse would be "ears you have dug for me".

I can understand an idiomatic translation; digging out ones ears is a Hebrew idiom roughly equivalent to having an "open ear" in English. But moving to "a body have you prepared for me" seems to be far beyond translating an idiom.

I looked at one of these sites that has a whole bunch (17) of translations; all translate that phrase in Hebrews fairly similar (mentioning preparation of a body). In the case of the Psalm, likewise, they all seem to mention something about ears. Whether "you have made me listen" or "you have pierced my ears" or one of the ESV translations I mentioned above.

So most translations seem to point to the translation from Hebrew to Greek is a rather liberal one. Am I understanding this correctly? And if so, how does digging out an ear relate to preparing a body?

The footnote for Hebrews 10:5-7 in the New American Bible mentions the following:

A passage from Ps 40:7–9 is placed in the mouth of the Son at his incarnation. As usual, the author follows the Septuagint text. There is a notable difference in Heb 10:5 (Ps 40:6), where the Masoretic text reads “ears you have dug for me” (“ears open to obedience you gave me,” NAB), but most Septuagint manuscripts have “a body you prepared for me,” a reading obviously more suited to the interpretation of Hebrews.

Dr. Kennicott has a very ingenious conjecture here: he supposes that the Septuagint and apostle express the meaning of the words as they stood in the copy from which the Greek translation was made; and that the present Hebrew text is corrupted in the word oznayim, ears, which has been written through carelessness for az gevah, THEN A BODY. The first syllable THEN, is the same in both; and the latter which joined to makes oznayim, might have been easily mistaken for gevah, BODY; nun, being very like gimel; yod, like vau; and he, like final mem; especially if the line on which the letters were written in the MS. happened to be blacker than ordinary, which has often been a cause of mistake, it might have been easily taken for the under stroke of the mem, and thus give rise to a corrupt reading: add to this the root carah, signifies as well to prepare as to open, bore, Septuagint, and followed by the apostle, must have read the text thus: az gevah caritha li, σωμαδεκατηρτισωμοι, then a body thou hast prepared me: thus the Hebrew text, the version of the Septuagint, and the apostle, will agree in what is known to be an indisputable fact in Christianity, namely, that Christ was incarnated for the sin of the world.

That is, Psalms 40 in the Masorectic text has a transcription error that was not present in the translations upon which the Septaguint manuscripts were based.

The author of Hebrews is quoting from the Septuagint, which apparently mistranslated or poorly translated Psalm 40:6.

This brings up issues of infallibility (e.g., is the mistranslation inspired because it's in an inspired book?). This doesn't totally resolve the problem, but I tend to look at issue like this as confirmation that the Holy Spirit is powerfully at work in us when we read the Scriptures, and that is more important than having the most accurate translation possible. Many centuries of Christians were without good translations of the Bible, and they got on remarkably well.

The author is quoting the Septuagint:

This is apparently, a poor translation from the original Hebrew to the Greek. There are several examples of translation issues in the Septuagint. This is another example of such a translation.

Well, this is actually not an answer but more a comment to an answer previously given (or additional question) that I cannot submit otherwise as my reputation is not high enough. Please forgive me and feel free to correct me.... However..

Can anyone please point me to a source where I can see the Hebrew words for 'az gevah' (body) and 'oznayim' (ears) in order to see the plausibility of Kennicott/Clarke's explanation that "The Hebrew words "then a body" (az gevah) could have been carelessly copied as "ears" (oznayim), which look very similar in the Hebrew."?

EDIT: This diagram might answer the question by visually complementing the Kennicott/Clarke's explanation: 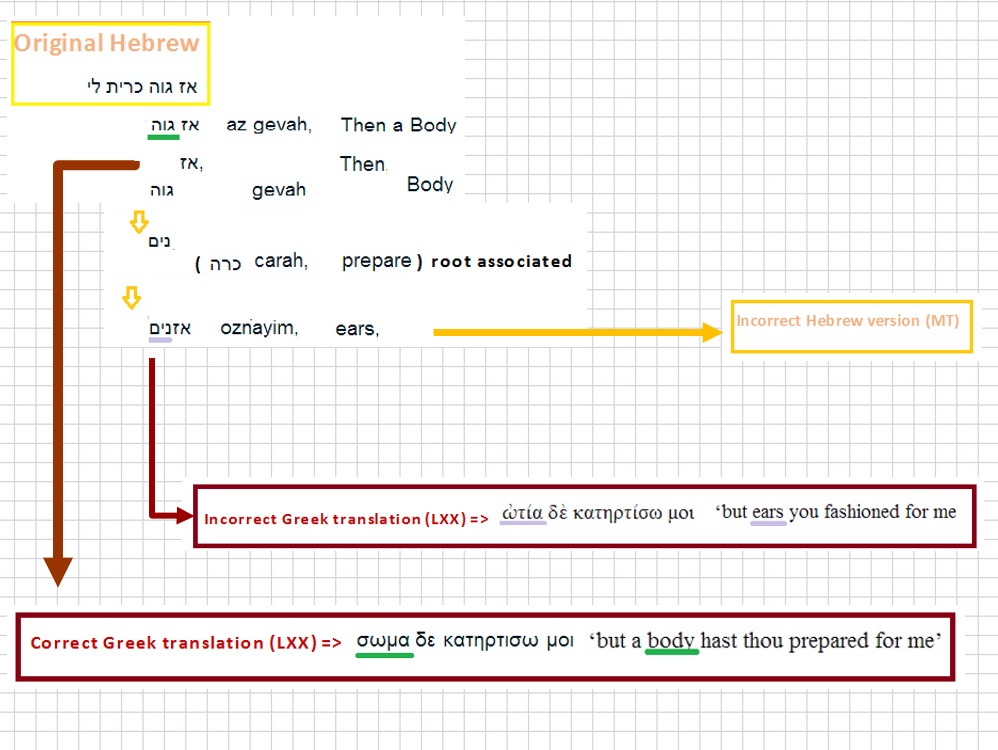 Not the answer you're looking for? Browse other questions tagged translation exegesis .

18
Can we trust the Septuagint?

8
What is a faithful translation for "the son of perdition" in John 17:12?
27
Which translation of Augustine's Confessions is the easiest to read in English?
5
St Augustine's 5th and 6th Needs - Translation
7
Is there an Arabic translation of the Book of Mormon?
1
What is the translation methodology for the Nueva Versión Internacional (NVI)?
3
Is there a good Swedish Bible Translation that's not the equivalent of the NIV?
0
Did the pre-Christian Greek Bible contain only the five books of Moses?
2
Where can I find an English translation of St. Augustine's Questions on Heptateuch?