What is the origin of the Evil Eye in Christianity?

My family owns several charms—such as necklaces, bracelets, and small stones—with the Evil Eye symbol on it.

My family is Christian, and if I remember correctly the Evil Eye is of Turkish origin. This would imply that the Evil Eye has Muslim roots.

What could possibly explain why my Christian family owns items of Muslim origin? The artistry of the piece is indeed something that would warrant owning it, but my mom has spoken to me of it religiously, in that it "wards off evil spirits."

The so called "Evil Eye" is a classic example of spiritual syncretism. It's origin is neither Christian nor Muslim — yet the belief system that it stands for has through long proximity been partially assimilated by adherents to both of of those religions.

It goes several names, but for example in Turkey it is usually known as Nazar. It is simply a symbol, usually a concentric pattern of circles in blue and white, that is supposed to ward off evil spirits. The symbol is so universal in Turkey that it is almost impossible to avoid. Even as a Christian with no interest in having them around I am constantly finding the things floating around my house. They are printed on receipts, dropped as tokens into shopping bags and boxes, woven into clothing, left behind by wary guests, and generally come out of the woodwork like dust bunnies. 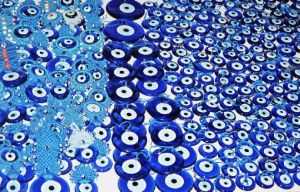 The Nazar or Evil Eye symbol is actually just the most visible of many Animistic beliefs. The use of this symbol is actually fundamentally incompatible with Islam, but the two beliefs are widely practiced side by side and people are generally unaware of the conflict of interest they pose to each other.

In addition to being incompatible with Islam, belief in the Evil Eye to ward off evil spirits is almost universally seen as incompatible with the core doctrines of Christianity (as are almost all other incarnations of Animism). If some of our trust for safety is placed in something other than Christ, that thing becomes an idol that detracts from our focus on our Savior. The one who is able to protect us from all evil Spirits is the one who Himself triumphed over them:

Colossians 2:15 (ESV) He disarmed the rulers and authorities and put them to open shame, by triumphing over them in him.

CalebCaleb
36.2k1818 gold badges133133 silver badges273273 bronze badges
add a comment  |
Highly active question. Earn 10 reputation in order to answer this question. The reputation requirement helps protect this question from spam and non-answer activity.
Like any library, Christianity Stack Exchange offers great information, but does not offer personalized advice, and does not take the place of seeking such advice from your pastor, priest, or other trustworthy counselor.
Blog
Featured on Meta

11
Is there a Christian basis for using garlic, crosses, and holy water against evil?

7
Does the Dome of the Rock have any importance to Christianity?
3
What is the current Catholic church's view on Haitian Vodou?
7
What is the basis for the belief that Christianity and Islam worship different gods?
6
Where, if anywhere, is it explicitly stated that the Church may borrow and adapt heathen feasts?
6
Is there an equivalent to cantillation or tajweed in Christianity?