What relationship, if any, does the Feeding of the Multitudes in Mark have to this passage in Goethe's Faust?

I'm reading Goethe's Faust and I came upon this passage, spoken by Mephistopheles:

For Devils and for spectres this is law: Where they have entered in, there also they withdraw. The first is free to us; we’re governed by the second.

In the original German, this reads as :

Does this "law"/superstition have any basis in Christian doctrine? I ask because I was paging through a copy of Paul Verhoeven book, Jesus of Nazareth, which includes this passage in reference to the Feeding of the Multitudes: 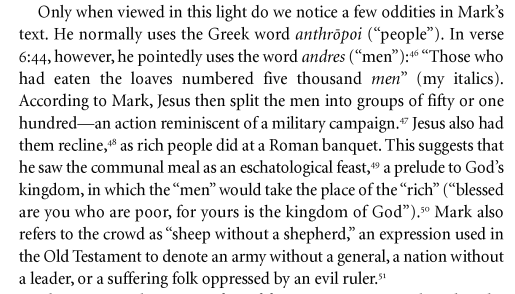 Footnote 49, after this text "this suggets that he saw the communal meal as an eschatological feast, refers to this passage from Faust.

I don't see how these passages are related; is their a relationship that I'm missing?

The Goethe quotation is part of an ensemble of beliefs around the activities of evil spirits, and the ability of humans to control or confuse them by symbolic (ie, magical) practices. You may have heard of the idea that vampires have to be invited in to your home in the first instance, but thereafter can return as they please. This is similar, saying that demons have to go out in the same way that they came in.

In Mark 2 and Luke 5 is the story of Jesus healing a paralytic man, who is let down through a hole in the roof of the house. Some commentators have suggested a parallel with customs surrounding the movements of evil spirits: (1) an Indian custom that someone could be healed of demonic possession by lowering them into the house through the roof, and then expelling the demons outward along the same path, (2) a Roman custom that someone missing, presumed dead, and then found alive should return to their home through a hole in the roof, so that death would not be able to follow them, or (3) that dead people should be carried out of their house by an unusual route, again to confuse the demons. This third one is the one being cited in your footnote.

(I think that your footnote 49 is actually for a different chapter in the Verhoeven book - his Chapter 4, as far as I can see from the Amazon preview, covers this miracle, whereas the feeding of the multitudes is in Chapter 5. If the footnotes are separately numbered for each chapter then this is an easy mistake to make! I agree that the feeding of the multitudes has no relation to the Goethe passage.)

This is not necessarily "based in Christian doctrine", though. It is the kind of belief for which someone who already held it could possibly find support in the Gospel passages mentioned, if they were sufficiently motivated. But I think van der Loos puts his finger on it when he says:

Data such as these are definitely most peculiar, and worth mentioning, but since according to the Evangelists the bearers of the sick man acted in this way because they could see no other opportunity of taking the paralysed man to Jesus - in Mark 2:4 and Luke 5:19 this is stated as the motive - there is no reason to look for other motives.

Not the answer you're looking for? Browse other questions tagged biblical-basis gospel-of-mark .

2
How does Mark's Gospel mark the final hours in the life of Jesus
1
Is this quote actually in the Gospel of Mark?
0
Jesus said I am the Way, how does the Catholic Church best explain this passage?
6
Does the Catholic church consider Mark 16:9-20 to be biblical canon?
1
Mark 5 Jesus encounter with the demons: what is their relationship to Jesus?
0
According to Catholic Church, does Mark have a distinction among the Evangelists for recording trivial details?