How widely used is "beehive" imagery?

The LDS church uses the imagery of a beehive to represent the way the church [should] function. Notably lacking any sign of the cross or other usual Christian symbology in the temple, the main pulpit used in the venue hosting the General Conference is adorned with several beehive carvings. The meaning of this symbolism was explained during one of the sessions.

Where else in Christianity has this imagery ever shown up? Do any other theologocal traditions make use of it? Is it widely used in LDS decoration or is this just an isolated case?

The symbolism actually comes almost entirely from Brigham Young's fascination with one simple verse in the Book of Mormon.

And they did also carry with them deseret, which, by interpretation, is a honey bee; and thus they did carry with them swarms of bees, and all manner of that which was upon the face of the land, seeds of every kind.

When Brigham Young worked to establish Mormon colonies throughout the Inter-Mountain West region, the colony eventually petitioned the US government for statehood. Brigham Young decided that the territory should be called "Deseret," because he saw the honeybee's industriousness and self-sufficiency as admirable and worthy of emulation. The proposed State of Deseret was enormous, covering almost all of modern-day Utah and Nevada, and smaller portions of the surrounding states, and Congress ended up denying the petition, and instead allowing statehood to smaller regions. However, to this day, a beehive icon titled INDUSTRY figures prominently in the official seal of the state of Utah, also known as "the beehive state."

The term Deseret is used in many parts of Mormon culture, particularly in Utah. (See the Wikipedia disambiguation page for several prominent examples.)

It's worth noting that 20th century scholarship and research into ancient Egyptian language and culture has discovered that honeybees were held in extremely high regard by the Pharaohs, and the word DSR.T (vowels removed, as they were not part of the written language) was associated with them. (Nibley, "The Deseret Connection", Abraham In Egypt)

Within the church, the beehive symbol is easily recognizable, but is not particularly common. For example, the pulpit at the Conference Center is decorated with a beehive icon, as noted in the question, but in most local chapels it is not present on the pulpit.

The bee and the beehive are very powerful imageries in the Catholic Church.

The bee is also a symbol of wisdom, for it collects nectar from many flowers and turns it into nourishing and pleasing honey, which is the 'gold' of bees. We should do the same, take whatever we can and transform it through our labor into a superior element useful for us and our neighbor.

The symbolism of bees within the beehive also signifies the way the Church generates her spiritual fruits because bees are virginal, they don't have any sexual contact. As the Church gives grace through the purity of her divine Sacraments, so the bees give us honey and wax by the labor of their pure bodies. This is why their wax, considered the fruit of a virgin labor, is worthy to burn in the candles on the altar at the offering of the Holy Sacrifice.

The honey, so agreeable to the palate, is symbolic of spiritual sweetness and religious eloquence. For this reason, the beehive is emblematic of St. Ambrose of Milan and of St. Bernard of Clairvaux, two Doctors whom the Church have surnamed mellifluous and mellificuus. 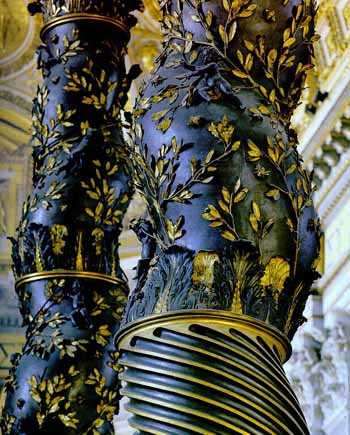 In the columns of the Altar of the Confession in St. Peter's Basilica one finds bees among the leaves and flowers.- The Bee, A Symbol of the Church

The Queen Bee is also the symbol of the Blessed Virgin Mary in Catholicism.

The bees’ survival depends upon a queen and their unquestioning obedience and loyalty to her, just as we are all absolutely dependent upon Our Lady, the Queen of Heaven, for our eternal salvation and our protection from the world, the flesh and the devil.

Bees instinctively observe such a tremendous reverence for their authority that none dare leave the hive to swarm in other pastures unless the queen has gone forth in front of them and claimed the first rank of flight for herself. The ever-vigilant bees guard their queen and hive - as we should guard Our Queen and our Church - to the ultimate price, and instinctively consider it a duty to die for them. - The Bee, A Symbol of the Church

Not the answer you're looking for? Browse other questions tagged lds symbolism .

18
What is the reason for the absence of the Cross as a symbol in the LDS Church?
7
What is an LDS general conference?
10
Why is the Exsultet so keen on bees?

24
How did the cross come to be a symbol for Christianity?
5
Why is the fish often used as a symbol of Christ?
10
Why do LDS use water and leavened bread in communion when the Jews used wine and unleavened bread?
9
In the LDS Church, who decides where to place new Churches, and how?
4
Why is the name Jehovah not used more in the Book of Mormon?
1
In Catholic art imagery, how is hell symbolized?
5
What is the prayer roll at an LDS temple, and how is it used?
1
Ancient imagery beasts used in Christian symbolisms?