Is it possible to get into heaven, but then be cast out at a later date? [closed]

People struggle to enter Heaven, but what guarantees you that once you get there you won't be cast out from Heaven? In the Bible there is no guarantee about that. What will prevent you from making bad mistakes there?

In the parable of the Rich man and Lazarus, Jesus says no:

And he cried out, ‘Father Abraham, have pity on me. Send Lazarus to dip the tip of his finger in water and cool my tongue, for I am suffering torment in these flames.’ Abraham replied, ‘My child, remember that you received what was good during your lifetime while Lazarus likewise received what was bad; but now he is comforted here, whereas you are tormented. Moreover, between us and you a great chasm is established to prevent anyone from crossing who might wish to go from our side to yours or from your side to ours.’ (Luke 16:24-26 NABRE) 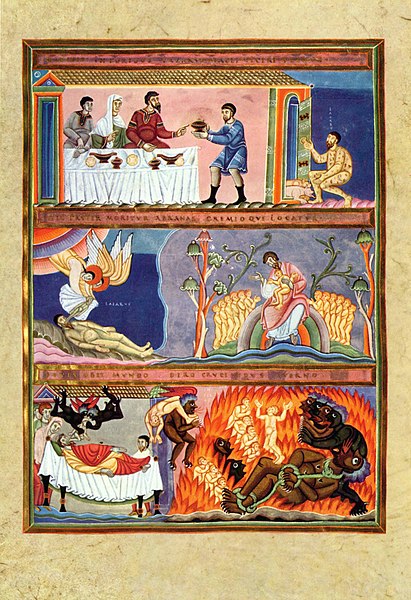 Fairly widely held doctrines that would tend to discount this possibility:

John 10:28, typically used to support the doctrine of eternal security, would lend credence to the idea that once saved you cannot be "unsaved:"

give them eternal life, and they shall never perish; no one can snatch them out of my hand

If this is true on Earth, how much more should this be applied to heaven?

Additionally, it should be understood that in many theologies, there comes a point at which Christians cannot commit sin - b/c the law no longer applies. This would be a fairly straightforward reading of Romans 7:

Do you not know, brothers and sisters—for I am speaking to those who know the law—that the law has authority over someone only as long as that person lives? 2 For example, by law a married woman is bound to her husband as long as he is alive, but if her husband dies, she is released from the law that binds her to him. 3 So then, if she has sexual relations with another man while her husband is still alive, she is called an adulteress. But if her husband dies, she is released from that law and is not an adulteress if she marries another man.

4 So, my brothers and sisters, you also died to the law through the body of Christ, that you might belong to another, to him who was raised from the dead, in order that we might bear fruit for God. 5 For when we were in the realm of the flesh,[a] the sinful passions aroused by the law were at work in us, so that we bore fruit for death. 6 But now, by dying to what once bound us, we have been released from the law so that we serve in the new way of the Spirit, and not in the old way of the written code.

Whether or not that happens on this side of eternity is moot for purposes of the question - In heaven, there is most likely no law to break.

Foundationally, for reformed believers, salvation is about a grace - it is not a work of your own lest any man should boast. There is no amount of sin that makes God love us less, there is no amount of good that can make God love us more. Were heaven a reward for our behavior, then there would be reason to fear "losing" one's reward (and yes, there is Scripture to that effect). But, if in fact, heaven is God's gift, then ultimately, it doesn't matter what we do now or in the afterlife.

I think Rev. says it best:

He will wipe away every tear from their eyes, and death shall be no more, neither shall there be mourning, nor crying, nor pain anymore, for the former things have passed away.(Rev. 21:4 ESV)

The solution here is a bit esoteric. I'm having trouble finding the reference, but as I have heard the body of the Resurrection is not subject to the passions, i.e. lusts, hunger, thirst, sickness, poison, rage, greed, etc. Thus we have in Revelation that we will be free of sickness and suffering. This also is in Isaiah's prophecy as well, along with 'They will not need to say to their neighbor, 'Know the Lord!' for he will be written upon their hearts.'

St. Maximus writes that 'All will have eternal being, but not all will have eternal well-being.' Eternal being itself is a different manner of existence, and eternal well-being - this state/place/condition known as Heaven or simply the Life to Come is one not only free from sufferings, but free from the effect of sin, thus free from the temptations and errors that have been compounded both in those we know and in the world they inhabit.

Then, those who dwell in virtue not because of nature but because of choice, and who live free from the effects of sin will have neither a reason to fall away as a choice (like Satan's or Judas') or as an error of ignorance or result of corruption.

It goes without saying that such a state cannot be attained without the grace of God; but effort is required to 'work out one's salvation with fear and trembling' - once victory is attained and in accordance with how the Life to Come is described in scripture, the reasons for the occurrence of sin (and thus falling away from God and that state/place/condition known as Heaven) will be gone.

This is absolutely beyond all possibility in every possible term and sense.

There are many ways the Bible argues the impossibility. One is simply from the fact that the life of the redeemed is not their own life but a life derived from Christ. Therefore with that life, one can’t go against the power of its own nature, which is Christ’s nature. But this is all too high doctrine for the level of the question, so why not just let the Bible answer itself:

38 For I am convinced that neither death nor life, neither angels nor demons, neither the present nor the future, nor any powers, 39 neither height nor depth, nor anything else in all creation, will be able to separate us from the love of God that is in Christ Jesus our Lord. (Romans 8:38-39, NIV)

The only possibility of the redeemed being cast out from heaven is if God is evil and his word is a lie. This is impossible.

Catholic theologians of the middle ages, particularly Thomas Aquinas, along with with a few protestant denominations, taught this doctrine.

My understanding of it, as relates to this questions is that, whereas now God's full glory is hidden from us, once the saved find themselves in heaven, they will see God face to face. This experience is so overwhelming and life changing that, even though the blessed still have free will to choose right from wrong, their will, will have been so altered by this vision, and continued contact with God, they will by no means wish to commit any type of sin.

Check out the Catholic Encyclopedia under the section 'Supernatural character of heaven and the beatific vision', and wikipedia as well.

Not the answer you're looking for? Browse other questions tagged heaven or ask your own question.

27
Can a Christian choose to walk away from his or her salvation?
7
According to the Bible, what kind of debt, if any, is lawful?

3
Who created heaven and hell?
11
According to the Catholic Church, will we have physical bodies in heaven?
2
Which group adhears to the idea of heavenly amnesia?
7
Will family members get to visit each other if separated into different kingdoms in heaven?
1
According to the Assembly of God, must a person love God to get into heaven, if he believes in Christ?
6
Is there any clue/hint in the Bible that tells us “why or how” we won't sin on heaven?
2
Is there a bad part of heaven?